Why is “The Invitation” rated PG-13? The MPAA rating has been assigned for “terror, violent content, some strong language, sexual content and partial nudity.” The Kids-In-Mind.com evaluation includes a sex scene with partial nudity, a kissing scene and flirting, non-sexual partial nudity, several jumps scenes with the implication of people being attacked and killed by something unseen, a throat being slit and blood collected for drinking by others, a woman being nailed into a coffin, a suicide, a few arguments, and at least 2 F-words and other strong language. Read our parents’ guide below for details on sexual content, violence & strong language. After the death of her mother a woman (Nathalie Emmanuel) feels that she’s alone in the world, until a DNA test delivers long-lost family members from Britain. Making the trip and being welcomed with open arms leads to some shocking revelations, which eventually turn bloody. Also with Thomas Doherty, Stephanie Corneliussen, Alana Boden, Sean Pertwee, Hugh Skinner, Virág Bárány and Courtney Taylor. Directed by Jessica M. Thompson. [Running Time: 1:44]

– A man and a woman argue, they kiss, he lifts her off the floor and she wraps her legs around his waist and removes her robe (we see her bare back) as the man lays her back on a bed and they continue to kiss (sex is implied); they are shown in bed later and we see his bare chest and abdomen and her bare back and hip.
► A man and a woman kiss as fireworks light the sky in the background. A man and a woman dance closely together at a party, he asks her if she would like to leave, and they walk together in the dark. A man asks a woman if he can stay with her until she falls asleep, they lie in bed fully clothed next to each other, and she wakes up alone. A man and a woman flirt in several scenes.
► A man asks a woman to marry him after they have had sex and she says, “You’re high on sex.” Two women talk about being touched by people they are waiting on at a gathering. A man tells a woman that she is part of a family scandal when her relative had an illicit affair with a footman. A woman tells another woman that she should have sex with a man and that, “It has been a minute since you had some.”
► A woman swims in a pool fully nude and we see her bare back, buttocks and legs as she enters the pool and her bare breasts and shoulders (distorted by the water) as she swims around. A woman wears deeply cut dresses and robes that reveal deep cleavage in several scenes. A woman wears a tank top in bed and her nipples are visible through the fabric. A woman wears a low-cut dress that reveals cleavage. A woman wears overalls that reveal cleavage and bare shoulders. A man wears his shirt open to reveal his partial bare chest in a few scenes. A woman wears a low-cut dress that reveals her bare back to the waist, cleavage and bare shoulders. A woman wears a gown that reveals her bare back.

The Invitation SUBSTANCE USE

– A woman comments about wasting money on cocaine (referring to “blow”). A woman drinks wine from a small wine bottle, a woman drinks a glass of unidentified liquor, people at a party hold and drink from champagne glasses, and a woman asks another woman if she overdid it on the bubbly.

– Be very careful what you wish for. 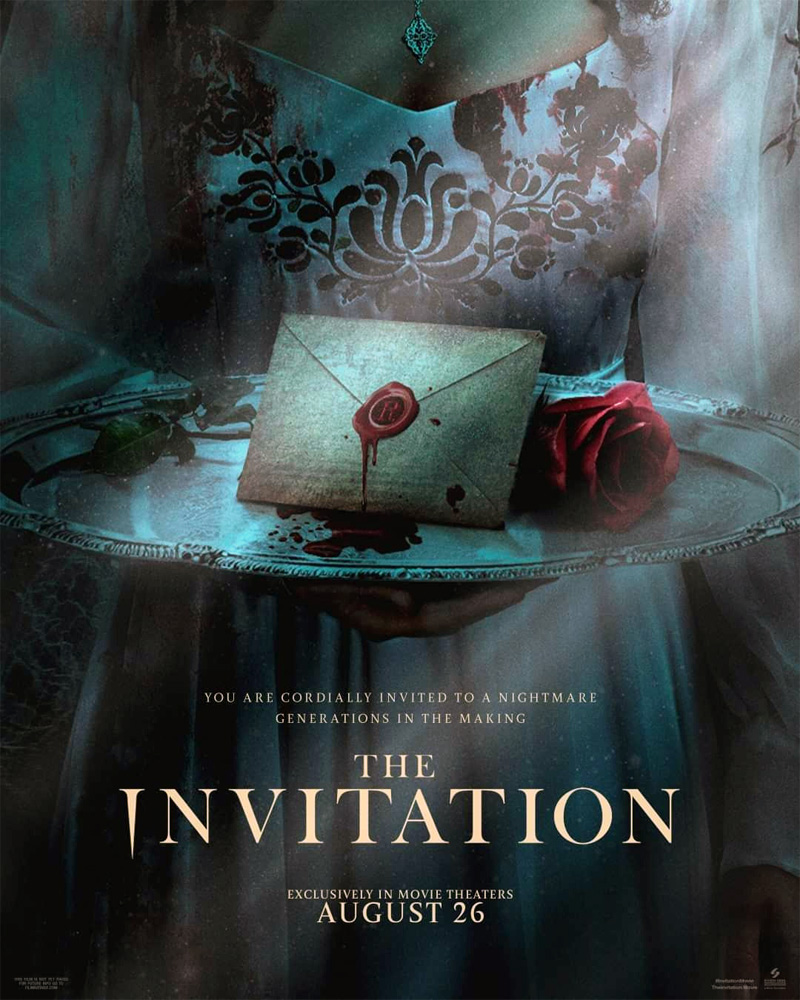