In a place called Malaria, the sun never shines and evil scientists abuse hunchbacks, referred to as Igors, in an effort to create the most diabolically evil creations. When one such scientist is not careful, he blows himself up leaving his Igor (John Cusack) with the idea of creating his own evil creature. In the process he and the others discover that they don't have to be evil to survive. Also with, Steve Buscemi, John Cleese, Jay Leno, Jennifer Coolidge, Molly Shannon, James Lipton, Eddie Izzard and Christian Slater. Directed by Tony Leondis. [1:26]

SEX/NUDITY 2 - After an argument a man grabs a woman and pulls her close to him, picking her knee up. A man and a woman hug.
► A woman lifts her skirt to retrieve something for a man (we see her bare thighs). A woman wears tight-fitting outfits that reveal cleavage, bare shoulders and several times she wears thigh-high stocking and a short skirt. Several women are shown wearing low-cut dresses that reveal cleavage.
► A female character tells a male character that she loves him and they later hold hands. An announcer who is an invisible man says he's "au naturale" and we see that there are no pants below the point where his waist is likely to be; later he asks about the price of pants.

VIOLENCE/GORE 4 - There is a rabbit-looking character that we are told is immortal, but it does not want to live and tries to kill itself repeatedly: it drinks poison, dies and then comes back to life, it is electrocuted (we see it charred) and then it comes back to life, it is shot and it's OK later, it bites into an electrical cable and glows, and it gnaws off its own feet (we see the paws dangling from a trap they are caught in, including the exposed bone).
► We see a variety of body parts being placed on a metal table, a brain being pressed into the hole in a skull and a glowing "evil bone" being attached to a hand.
► A human-looking monster is seated in a room, a metal clamp closes around its head and two metal devices hold its eyelids open as it is forced to watch violent images of people (we see a woman screaming in one image).
► An experiment causes an explosion that kills a man (we see the man's dismembered hand land on the floor after the explosion). A large weather machine falls on and crushes a man (no gore).
► A rabbit-looking character says, "What happened to the cards that blew your head off?" and we later see it open a card that explodes and blows a large hole in its head (it regenerates and it is OK). A man comes out from under a pile of rubble and spits out a bit of blood.
► There is a character that is a brain in a jar filled with liquid, and it is on wheels with one robotic arm. People with humps on their backs are referred to as Igors and they are treated as servants who are frequently abused (verbally and physically) throughout the movie.
► We see several "evil inventions" entering an arena: One blows fire, one is a teddy bear with large metallic jaws, etc.; they all fight and all but one are destroyed. A human-looking monster fights with several other evil creatures; they throw each other around and strike each other. Several evil creatures fight: there are punches and kicks and body slams until one is left standing. A man kicks another man off a tall tower.
► A man throws a character across the floor knocking furniture around. A man swings a character around and slams him onto the floor. A man and a woman slap a character across the face several times. An electrical current spins around a column during an experiment, and causes an explosion that kills a man.
► A human-looking monster swings upside down from the knees, roars loudly and crashes through a wall; several characters follow through trampled trees in thick woods and they hear children screaming in a home for "blind orphans" (we learn that they are happy screams).
► A carriage nearly runs down a deer, it swerves and continues to speed along winding roads, jumps over a ledge and dangles from the edge. A human-looking monster is taken away.
► A character opens a card and finds himself in a place where he is surrounded by flames. A character falls from a high tower and bounces on a metallic roof (he's OK). A character is thrown into the recycling chute, two others fall into the chute, and they are lapped at by flames and approaching chomping metallic jaws (they are OK). A woman holds up her foot to show us that she is wearing baby seal boots and the boots whimper.
► Someone says, "She's building a club of flowers to kill us with." We see a poster of "tortured kittens" and a cat has a noose wrapped around its neck. A woman makes a rude comment about "dirty little hunch people." A man swings an ax at a character with a brain in a jar who says, "I think I wet myself." A man threatens to recycle a character. People talk about evil inventions that will be used to kill people. A man talks about pushing someone's face in "number 2." A man says, "let's go kick dead people." A character that consists of a brain in a jar of liquid exclaims that it is getting "jar sick" while on a bumpy carriage ride. A character remarks about having a new air freshener with the scent of "dead dog." A man makes a comment about having to use the bathroom because he had a "bat in his belfry." An arena is called the "killoseum."
► A switch is pulled, sparks fly and sirens blare. Thunder and lightning flash and crash in a dark and cloud-filled sky throughout the movie.

SUBSTANCE USE - Two people drink something in a martini glass.

MESSAGE - We all have an evil bone in our bodies, but we choose whether or not to use it. 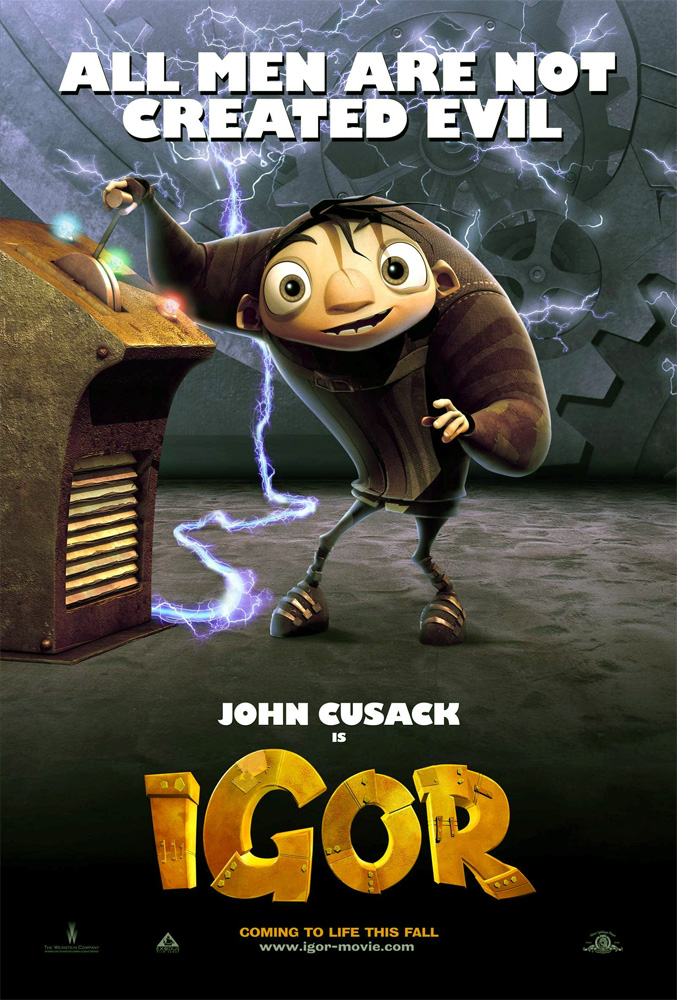