Why is “I Care a Lot” rated R? The MPAA rating has been assigned for “language throughout and some violence.” The Kids-In-Mind.com evaluation includes an implied sex scene and several kissing scenes between two women, a shooting causing death with bloody wounds shown, a near drowning, a house explosion, a reported murder (we do not see the incident), many arguments with threats of death or physical violence, several elderly people being swindled out of their possessions and institutionalized, and over 30 F-words and other strong language. Read our parents’ guide below for details on sexual content, violence & strong language. A crooked court appointed guardian (Rosamund Pike) plans to financially exploit her elderly charge (Dianne Wiest), but is thwarted when she discovers the older woman’s protective friends are members of the mafia. Also with Eiza Gonzalez, Peter Dinklage, Chris Messina, Isiah Whitlock Jr., Macon Blair and Nicholas Logan. Directed by J Blakeson. [Running Time: 1:58]

I Care a Lot SEX/NUDITY 4

– Two women embrace in the dark while standing against a wall and one woman wraps a leg around the other woman as they kiss several times; they enter a bedroom and the scene ends (sex is implied). Two women embrace for a few seconds in three scenes and kiss several times in one of the scenes; we see an engagement ring on the finger of one of the women.
► A woman pulls an unconscious man out of a car and removes his clothing, leaving him on the roadway (please see the Violence/Gore category for more details); we first see his bare chest, arms and shoulders, and then his bare buttocks, and one thigh that is crossed over his genitals. A woman in a convenience store pulls off a wet shirt, revealing a wet bra (we see her bare shoulders, arms, cleavage and the outline of her nipples). A woman wears a bra top and yoga pants in a gym (her bare shoulders, arms, cleavage, abdomen and the outline of her thighs are shown). A dozen elderly women exercise in a pool and we see cleavage.

I Care a Lot VIOLENCE/GORE 7

I Care a Lot LANGUAGE 8

I Care a Lot SUBSTANCE USE

– We see shelves of prescription bottles that cover an entire wall in a nursing home, nurses administer medications to the residents and we see one woman swallow a pill with water, a woman tells a man to decrease an elderly woman’s arthritis and pain meds and to give her stimulants at night and sedatives during the day, an elderly woman complains that she is given too many drugs and uses a slurred voice, a man says that he will hire “mules” (drug smugglers), and a police officer tells a woman that a man is a major drug lord. Two women sip from short glasses of an amber liquid in two scenes, and two women drink from champagne glasses in two scenes. A woman vapes from an e-cigarette in several indoor and outdoor scenes creating huge clouds of white smoke.

I Care a Lot DISCUSSION TOPICS

I Care a Lot MESSAGE

– Elder abuse and exploitation are serious problems in America that need to be addressed. 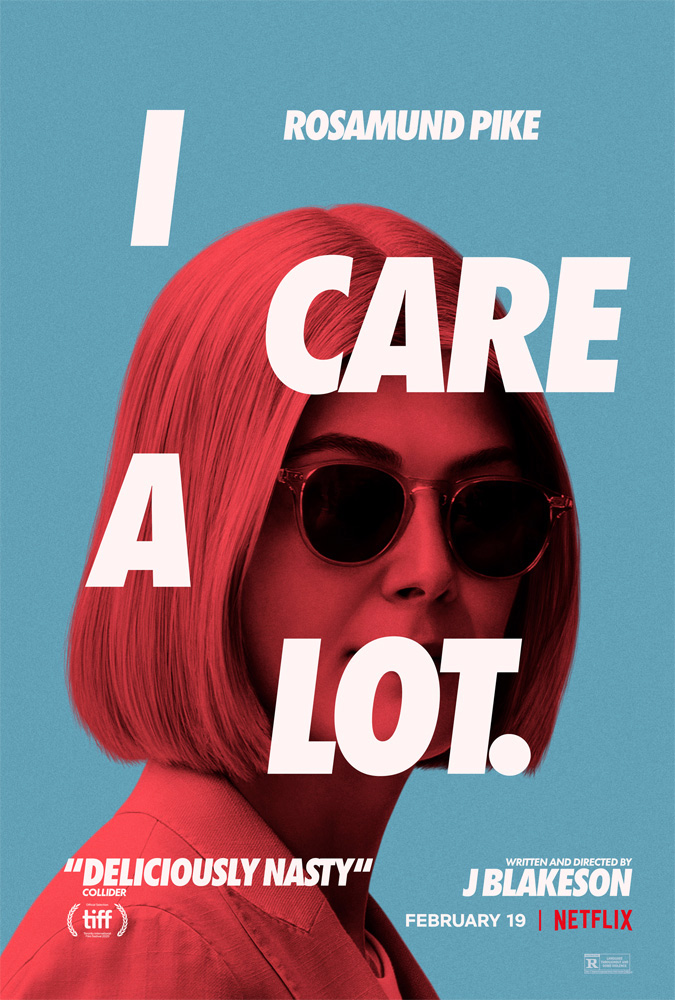