Why is “I Am Mother” rated TV-14? The TV rating has been assigned for “some material that many parents would find unsuitable for children under 14 years of age.” The Kids-In-Mind.com evaluation includes images of embryos and infants shown at different stages of development and a few clea Read our parents’ guide below for details on sexual content, violence & strong language.” After the apparent extinction of all humankind, a robot (voiced by Rose Byrne) guards a facility with thousands of human embryos destined to repopulate the Earth at some point. The robot, known as Mother, raises a teenage girl (Clara Rugaard) with affection, but when the teen encounters a wounded woman from outside (Hilary Swank) she begins to suspect that the maternal robot may have hidden some important truths. Also with Tahlia Sturzaker, Luke Hawker, Maddie Lenton, Summer Lenton, Hazel Sandery and Jacob Nolan. Directed by Grant Sputore. [Running Time: 1:55]

I Am Mother SEX/NUDITY 1

– We see many embryos in glass containers and an infant developing in an incubator (flesh and bare chest are seen). A toddler wearing only a diaper is shown a few times (we see her bare chest, back, abdomen and legs). A teenage girl wears workout clothing that includes a sports bra and tight-fitting pants (we see cleavage and bare abdomen). A girl wears a leotard while dancing (we see her bare legs to the hips). A teen girl wears a low-cut top that reveals cleavage in a few scenes.

I Am Mother VIOLENCE/GORE 5

– A teen girl operates on a woman’s abdominal wound, without any anesthetic: we see a very bloody bullet hole, the teen uses a suction device to clean the area and the woman moans, the teen inserts a long needle attached to a drill to remove the bullet and the woman screams and passes out (we see a lot of blood). A woman slashes a robot across the throat and neck and liquid spurts as the robot stumbles, and the robot holds the woman by the throat and tells her, “Every second you resist me, you’re losing more blood,” as it presses its fingers into a bullet wound on the woman’s abdomen (we see blood on her shirt). A woman fights a teen girl, grabs her and the teen bites her hand, and the woman puts her hand over the struggling teen’s mouth and then the woman shoots at a robot a couple of times. A teen girl touches broken glass and cuts her hand (we see blood and we see her pulling a shard of glass from the wound). A woman has a bloody cut on her forehead after a fight.
► A woman holds a sharp piece of broken tile against a teen girl’s throat (we see blood trickle), and the girl cries and pleads with a robot. A teen girl tackles a woman and the woman flips her over and presses her head into the dirt, and then lets her go. A teen girl slaps a woman hard in the face twice and shoves her. A woman has a bloody bullet wound on her abdomen and she is said to have a high fever.
► A teen girl carries an ax through a facility where lights are flickering. Many armed robots and a tank shoot into a facility and a teen girl holds a gun on a robot and tells it to call them off. A robot is shot and crumples to the ground. A teen girl runs away from a robot and short-circuits a door to pin the robots leg. A teen girl finds a gun in a wounded woman’s bag and takes it from her while she is unconscious. A teen girl stops abruptly when she is surrounded by many armed robots and we see a red dot on her chest (they let her pass).
► After finding a mouse in a sealed facility and fearing contamination from outside, a robot puts it in an incinerator as a teen girl pleads for it not to destroy the mouse (we see flames burst inside the incinerator). A teen girl pushes her hands though ash in an incinerator and finds part of a human jawbone.
► A teen girl goes to an airlock and hears knocking and pounding, and then the voice of a woman saying that she has been shot and needs help; the teen puts on a hazmat suit and places another one in the airlock for the wounded woman to put on. There are several stressful scenes with a teen girl nearly getting caught doing things that she is not allowed to do. A teen girl and a woman walk through a desolate area and a flying vessel flies overhead causing them to hide in a cornfield.
► Power goes out in a facility and a teen girl tries to rouse a robot that does not respond; the girl walks through the dark hallways with sparks spraying in a few spots and finds a wire has been chewed through; a mouse skitters nearby and the teen catches it in a jar. Alarms blare in a facility a few times causing a robot to charge through hallways toward the emergency. We hear loud explosions outside a facility and it shakes and dust falls.
► A woman is confined in a room and she tells a teen girl, “I’ve seen them torture babies.” A robot quizzes a teen girl about what she would do in a situation where she had to choose one life in exchange for many. We read that a facility is a “Relocation Facility,” and that it was set up after an “Extinction Event.” A girl says, “I wish I wasn’t human,” and, “Humans ruined everything.” A woman talks about living in mines for most of her life. A robot says that if a bullet had hit a little bit in another direction it would have destroyed the robot. A woman describes people going mad with hunger.
► After a surgical procedure, a teen girl wearing bloody surgical gloves coughs and gags (we do not see any goo or hear her vomit). A robot loads a human embryo encased in a glass case into an incubator where the embryo develops and becomes an infant; after a period of time, the incubator is opened, liquid pours out and the infant is removed and cared for by the robot. A teen girl rows a rowing machine while wearing a breathing mask attached to a tube. We see a bullet with blood on it in a container.

I Am Mother LANGUAGE 5

I Am Mother SUBSTANCE USE

– A teen girl spills a bottle of pills on the floor and a robot attempts to give a woman and injection of penicillin.

I Am Mother DISCUSSION TOPICS

I Am Mother MESSAGE

– Human beings are mostly predictable. Robots may not be capable of nuance when it comes to ethical decisions. 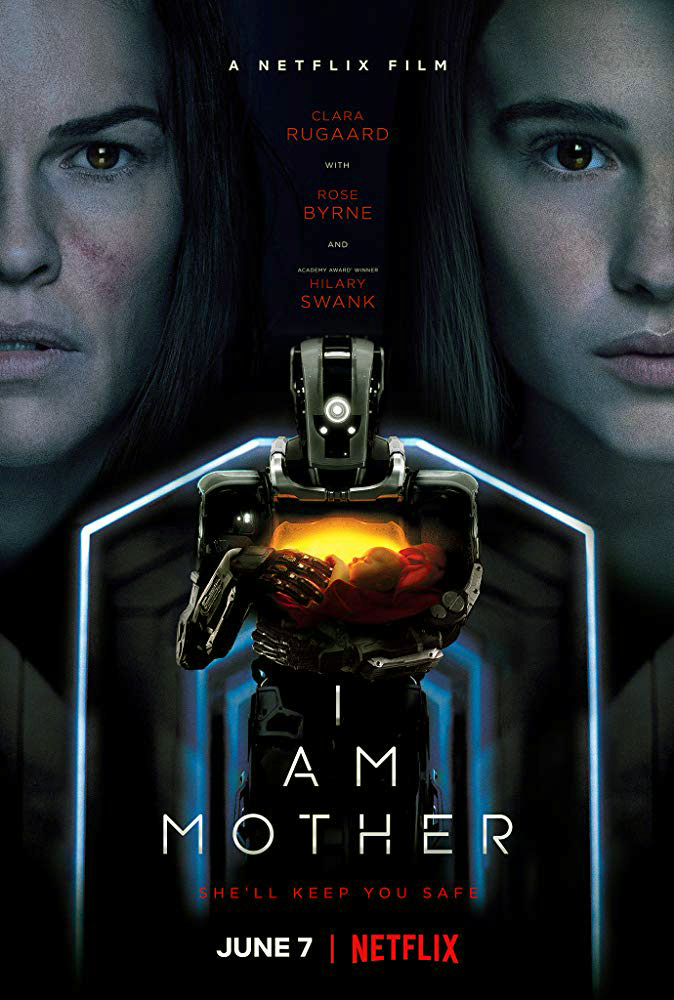