The Kadam family settles in a charming French village and opens a traditional Indian restaurant. However, the owner of the establishment across the narrow road (Helen Mirren) wants no such competition for her classic French house of haute cuisine and a feud ensues until the Indian family's son (Manish Dayal) falls in love with French cuisine and the restaurant's sous chef (Charlotte Le Bon). Also with Om Puri, Juhi Chawla, Amit Shah and Rohan Chand. Directed by Lasse Hallström. [2:02]

SEX/NUDITY 1 - In a kitchen a man and a woman kiss several times over a large pot of boiling water.
► A woman is shown wearing a long slip in bed (her shoulders and arms are bare) and she puts on a knee-length robe to answer a pebble tossed at her window; she opens the door of the house and hugs the man outside.
► A man attempts to kiss a woman and she says it's a bad idea, because they are rival chefs. A man kisses a woman's hand and she kisses his hand in return. A male cyclist runs off the road into a van, unhurt, when he stares at an attractive woman by the side of the road. A man and a woman talk and smile in several scenes. A man appears at a woman's door at night to say goodbye as he leaves for a new job and she becomes tearful. A man walks inside a building where lights and music come on and a woman asks him to dance and they do. A man sitting with a woman tells her that spending time with her is almost like having a girlfriend; she walks away and he thinks she is angry.

VIOLENCE/GORE 4 - During political change, shouting men with torches at night storm a family owned restaurant and burn it, as the screen fills with tall flames and falling debris; the family escapes except for the mother, whom we see wailing in silhouette on the other side of a thick wall of flames while her family on the other side cannot reach her and we hear that she died. Several men set fire to a restaurant where one of the chefs is engulfed by flames until his father rushes out and throws ice water on him and his brother uses a fire extinguisher (we see that the burned man has second-degree burns on his hands and red, raw, blistered skin is seen); we later see his hands heavily bandaged from fingers to elbows, looking like boxing gloves and later still, a woman squeezes his hands and he yelps in pain as she apologizes.
► A woman becomes angry when a male friend joins her kitchen and she begins slamming knives onto stainless steel tables. A man is angered when a culinary magazine calls his son a "boy from the gutter" and that a photo of his son makes him look like a terrorist; he slams the magazine down, spilling coffee on it. A restaurant owner calls her staff together and repeats part of the French national anthem: "They came to slit the throats of our sons and daughters" and tells one of her staff that she knows that he had his friends set fire to another restaurant and tells him to take his knives and leave; we see him spit at the other restaurant as he walks away, but we cannot see the spittle.
► People in a market jostle one another and a man trips and falls into the crowd, though we see no injury. Women argue loudly about buying sea urchin in a market. A man and his two sons argue several times about settling in a small French village and opening a traditional Indian restaurant. A man and a woman argue several times about the man's restaurant, their loud music and the inadvertently blocked road. A woman spitefully buys up all the stock at the market needed for a competing restaurant's opening menu and the next day, the wronged restaurant owner uses the same tactic against the woman, whereupon she attempts to have his restaurant closed down for loud music and other local violations, but fails. A man presents a meal for inspection to a restaurant owner and she rudely empties the plate into a garbage can. A man tells his adult and young children that they are at war with another restaurant. A man says that he hears that Indians bought cat food at a convenience store to serve in their restaurant. A man jokes with a woman that sometimes, small children are cooked in a Tandoori oven, then apologizes, as she looks horrified. A man rolls up some paper and uses it to trumpet a soft but rude noise at a woman. A man and a woman argue about the future of the man's son and where he takes chef's training. A female chef says Michelin restaurant guides are the Bible and the awarded stars are holy.
► The wall in front of a restaurant is covered with a graffiti message for the occupants to get out and a woman stands in the rain with a large container of hard soap and a scrub brush, washing off the graffiti.
► A man's son asks him if he is trying to kill the family with their malfunctioning van; the brakes go out and the vehicle careens down a short hill and up a dirt path, missing a tractor and some smoke is seen coming from under the van; the family pushes the large van into a small village.
► A woman teaches her son that in cooking, they make ghosts and spirits to make people happy with memories. A man cries in a restaurant, because the food he tasted was perfectly made, bringing memories of his mother. A man becomes tearful when he looks into a case of spices that his mother once owned. A woman begins to cry over an omelet. After a woman dies, her husband talks to her spirit, asking advice on decisions. We hear that a woman is a widow and unhappy. A woman hears that the mushrooms she picked in a forest are poisonous (no one ingests them).
► We see close-ups of plucked dead chickens hanging by their feet in a market. We see a wide array of seafood, some of it still living: crayfish move and we see lobsters, and small eels, dead fish, oysters in their shells on ice and other seafood in a market. In two kitchens, close-ups show chefs with wide knives chopping vegetables, heads from fish and parts of large crustaceans (we see a little blood from the fish); we also see raw chicken cooking. A young boy tastes raw, slimy-looking sea urchin meat from inside its shell of spikes and he later does so as an adult too. During a rainstorm, wind from a large low flying airplane causes a food stand to fall apart, dousing the hot food with cold water as the vendor growls in frustration. A little girl spits soup off screen into snow (we do not see it) saying, "Yuck! French food!"

SUBSTANCE USE - A man mentions chicken vaccinations (we do not see any vaccinations occur). Chefs use wine (against their no-alcohol cooking traditions) to save fish that has been out of refrigeration a little too long and its ice has melted, a man sits beside a bottle and a glass of wine (we do not see him drink), a woman drinks from a glass of wine and we see the bottle at a picnic, a man and a woman drink wine at lunch, restaurants serve champagne and we see men and women drinking it from tall glasses at a celebration, a man and a woman struggle over a bottle of 30-year-old champagne and then pop the cork and drink it, a man stands on a chair and drinks a glass of champagne, many tables in a restaurant are filled with glasses of champagne and other wines and we see men and women drinking, and a man sits at a bar and drinks shots of clear liquor and a glass of wine. 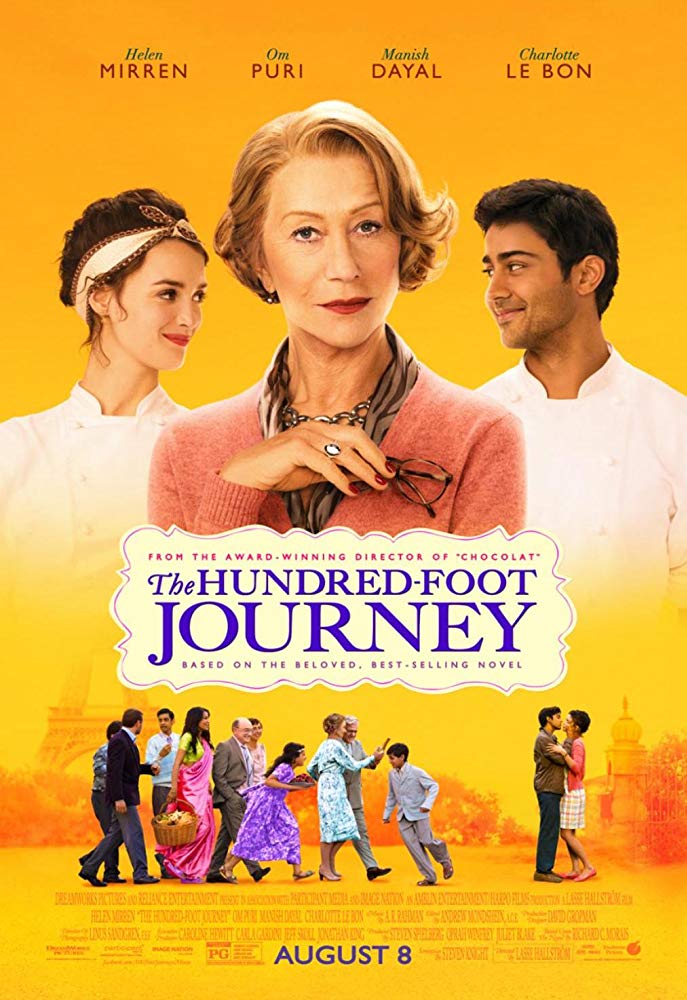