Animated sequel: Count Dracula's (voiced by Adam Sandler) grand hotel is now open to humans and they love it. However, the Count's young half-human grandson (voiced by Asher Blinkoff) is not acting at all vampire-like and Dracula's friends help take the boy to a vampire kids' training camp while Mom (voiced by Selena Gomez) is away. Also with the voices of Mel Brooks, Andy Samberg, Kevin James, Steve Buscemi, David Spade and Keegan-Michael Key. Directed by Genndy Tartakovsky. [1:30]

SEX/NUDITY 2 - A bride and groom kiss just as a vampire levitates a shrunken head between them and they kiss the head and then kiss each other briefly. A female monster with a tentacled head and big fish lips kisses a man many times on one cheek, leaving lots of lipstick. A female monster with a tentacled head punches a large bat, using four long arms while she coils a man with four more arms and kisses him on the cheek.
► A male vampire wears a nurse's uniform with large stuffed breasts and larger stuffed buttocks (a skirt slit shows his thin pink thighs and legs); a zombie uses breath spray, tries to kiss him, but he roars and his eyes glow red causing the zombie to walk away. We hear kissing sounds from two invisible people.
► An overweight monster wearing trousers hides in shrubbery, raises his behind and we see outlines of buttocks; two women, one wearing short shorts with legs bared to the upper thighs, and one wearing tight yoga pants jog by and giggle at him, and then take selfie photos with him.
► A mummy and an invisible man ask each other, "How hot is my date?" Song lyrics include, "I'm in love with a monster." A man says a wife is better than a girlfriend. A female bat tells her father that she is pregnant; another scene shows her clothed, under a quilt in bed with her husband hugging her large belly. A female werewolf pup wearing a dress knocks down a little human-vampire boy several times and licks his whole face; an adult vampire says she is a short hairy cutie.
► A creature loses fur from the waist down and we see a pink stomach, thighs and briefs. A male camp leader wears shorts that end just above the knee. At a party, a clothed female monster has a bosom and buttocks that jiggle a little when she dances. A female mummy wears a midriff top and sarong skirt with tight bandages covering her (we can see her waist and thighs; no cleavage). A female werewolf is pregnant, with a huge belly under a tent dress. A Frankenstein's monster loses his shirt and we see his stitched, grayish chest, belly and navel. During the end credits, a 2D cartoon of a male Black Lagoon monster with three eyes pulls off his shirt to reveal a green chest with three nipples.

SUBSTANCE USE - A waiter at a party carries a tray with one wine bottle and two glasses of wine, a monster drinks a glass of wine, a monster makes a toast with a glass of wine but does not drink, corked bottles of what could be wine are seen on a coffee bar, two invisible people hold glasses of champagne and drink them, a monster and a few humans hold glasses of wine at a party, and a vampire drinks a glass of blood (please see the Violence/Gore category for more details). Hundreds of were-pups eat a large amount of sugar and stampede, and a female vampire drinks all 48 flavors of Slurpee in a convenience store and we see her with rainbow-colored teeth as she talks fast into a surveillance camera and dances maniacally.

MESSAGE - All families need to teach their children tolerance and acceptance. 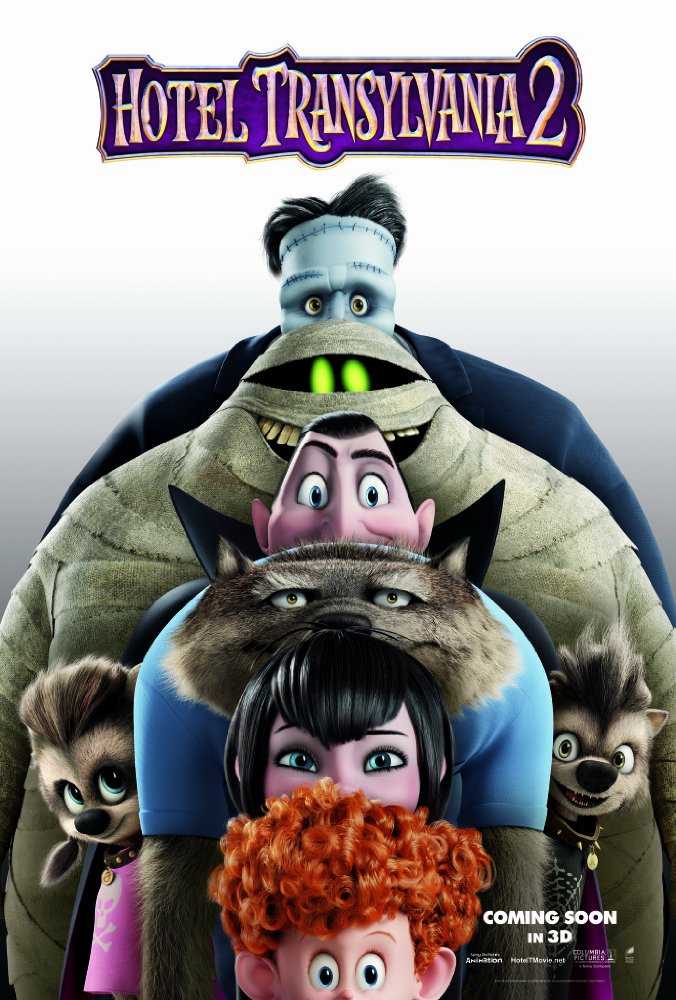