The movie follows the stories of three very different people, an American psychic (Matt Damon), a French journalist (Cecile De France) and an English schoolboy (Frankie and George McLaren) as their lives are touched by various aspects of death. Also with Jay Mohr, Richard Kind and Bryce Dallas Howard. Directed by Clint Eastwood. [2:09]

SEX/NUDITY 3 - A man implies that he had a vision about a woman being molested as a girl; and he tells her that he had a vision of a man (her father) saying that he "apologizes for what he did to you all those years ago" (neither of them explain further). A woman asks a man if he is "sleeping with" a woman; the man does not answer, implying that he is.
► A woman takes off her robe and we see her wearing a bra and underwear before putting on a dress. A man is seen shirtless, lying in bed and he is later seen standing, wearing boxer-style underwear. A woman is seen lying in a bathtub -- bubbles in the tub obscure her body. A man's upper chest is seen as he showers.
► Men and women kiss briefly on multiple occasions. A man and a woman hold hands and kiss. A man and woman kiss each other on the cheek and hold one another tightly.

VIOLENCE/GORE 5 - A boy is harassed by a group of teenage boys, who shove him, circle him and take his cell phone and bag; the boy runs into a street in front of a moving van, we see the driver look in horror as the boy's body smashes into the windshield and a thud is heard, and the boy is seen lying on the ground, a pool of blood under his head and a small drip of blood coming from his ear (it is implied that he is dead, as another boy cradles him in his arms and a group of people look on).
► A massive wave rolls from the ocean, people on a beach are knocked over and covered in the rapid waters as it crashes through a resort, knocking over buildings, and into a street filled with people: people are seen flailing underwater, attempting to swim as cars and debris rush past, a woman struggles to swim, she grabs onto a tree, a child disappears (it is presumed the girl died as the woman imagines seeing her in a post-mortem vision), and a car door slams into the woman's head and she slips underwater.
► A subway car is seen driving into a tunnel, we hear an explosion, and fire and smoke pour out of the tunnel. A boat is seen on fire, smashing into a dock where men are standing; many people float nearby on boats and debris is seen floating.
► Men and women are seen lying in hospital beds in a Hospice building, a man weeps as he holds a woman's hand, the woman closes her eyes and it is implied that she dies while several people watch. A small coffin is seen in a church as a priest says a eulogy for a boy, he tells another boy that he can collect the ashes outside, and is seen moments later handing the boy an urn.
► A woman's body is seen, seemingly gray and lifeless, as a man attempts to perform CPR on her; he gives up and says she is dead, she begins to cough and spits out a large amount of water, she is rolled on her side (water continues to pour from her mouth) and she is later seen alive.
► Several men and women are visibly shaken as they watch a television broadcast showing smoke pouring out of the entrance of a subway station; we hear that six explosions had happened on subways during rush hour, injuring and killing hundreds of people. A man and a woman walk through an area covered with debris after a tsunami: broken branches, stranded boats, and smashed buildings and cars are seen, as well as what are implied to be dead bodies covered with white sheets. We see television footage of an area covered in debris after a tsunami and we hear that thousands of lives were lost and there were billions of dollars in damages.
► A woman struggles to her feet as a man and another woman knock on the door and shout that they will have to call the police and child protective services if the woman is not home.
► A man watches as a boy stands outside his hotel, waiting for him until it is dark, and the boy is shown shivering in the cold. A man angrily throws a plate into a sink.
► A man tells a woman that he had meningoencephalitis when he was a boy and had to undergo surgery, that he had died on the operating table and was brought back to life, and that he then suffered from visions and crippling headaches for the rest of his life. A man and a woman discuss how a woman had a near-death experience, and the woman tells the man that she had died and felt herself come back to life. A boy is seen looking up "What happens when you die" on a computer and watches a video of a man explaining, "An angel of death comes to get you." On multiple occasions a man discusses with people how their loved ones had died, including asking a woman if her mother had died of a heart attack and if her father had died recently, asking a man if his wife had died from being bedridden with multiple sclerosis, and discusses with a boy how his twin brother had died at a young age. A woman begs a man to allow her to speak with her deceased child. A woman discusses with another woman how she has been working in hospice for over 20 years. A woman explains to a group that she is interested in researching a man who had died ten years previously, and was well known for abolishing the death penalty. A woman briefly mentions that she will be discussing child labor laws, and a man explains that his company does not take advantage of child labor laws. A man gives a presentation about a group of people who were rioting and looting in the streets. A man tells a woman over the phone that he is going to report a child missing after she asks him not to report him to the police for stealing £200. A woman tells a boy that he is being placed with a foster family while his mother "gets well." A man jokes to a woman that they need to be careful not to cut off their fingers while chopping vegetables. A man jokingly asks two boys if they had "robbed a phone box" when they hand him a large amount of coins.
► Two boys spit toothpaste from their mouths as they brush their teeth.

SUBSTANCE USE - Two boys discuss how a drug prescription for their mother was an opiate inhibitor, a woman is seen stumbling around -- obviously intoxicated -- and she passes out on a bed (we see needle marks on her arm), a man takes a pill out of a prescription bottle and then puts the pill back, and a man tells a woman that prescription drugs had made him stop having visions but had caused him to "stop living." Men and women drink wine and beer at a bar and while eating at restaurants, and a man instructs a group of men and women to drink wine. Several teenage boys smoke cigarettes.

MESSAGE - Many people have different ideas of what happens after we die, but no one knows for certain. 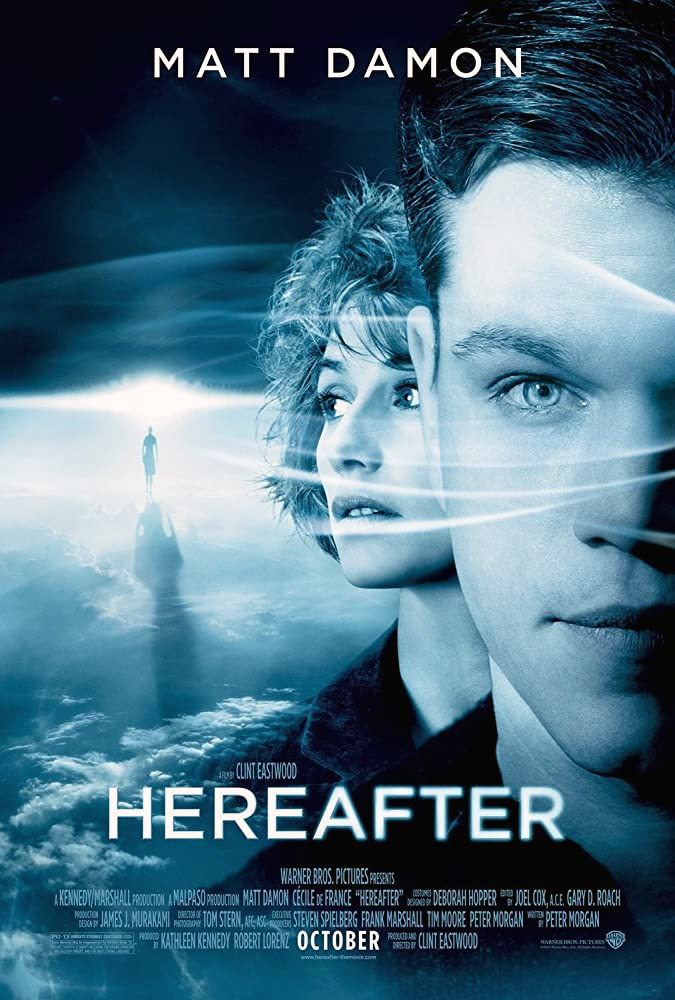