In this sequel to "Happy Feet," an Emperor Penguin (voiced by Elijah Wood) and his clan teach a new generation to dance. However, his son (E.G. Daily) is afraid of being laughed at and decides that a puffin (Hank Azaria) is a better role model. At the same time, an elephant seal (Richard Carter) is trapped under the ice and the penguins gather to rescue him, but will the elephant seals return the favor when the penguins need help? Also with the voices of Robin Williams, Matt Damon, Brad Pitt, Pink, Sofía Vergara, Hugo Weaving and Common. Directed by George Miller. [1:45]

SEX/NUDITY 2 - A male penguin looks at a female penguin from a distance and says, "You, me, beautiful egg, now." A male penguin hears the sounds of female penguins dancing on an ice pack and says, "That is the mating call; I will be thrown to the ground and kissed by a thousand chickens. I have so much love, I will explode" and he runs around calling, "Where are the chickens? Where are the chickens?"
► A large male penguin wearing a sweater jiggles every time he moves and another male penguin tells friends that the large bird has "man chiquitas" (meaning breasts). A male seal falls into an underwater cave and on top of a male elephant seal who chuckles and says, "Hello, Gorgeous"; the seal swims away, replying, "Oh, my mistake." Two male krill are swimming as one calls the other his partner and suggests starting their own swarm; the other krill says, "We're both males" to which the first says, "We'll adopt," and the other replies, "I'll adapt" and swims away.
► A puffin feeds a female penguin some fish and touches his tongue to hers; she laughs at him and he flies away saying she is a "hottie" (we hear that the penguin is married to a male penguin and has a baby). A female penguin tells a male penguin that he is beautiful; they walk away together as he calls her "baby" and they appear to be a couple. Female penguins are drawn with thin waists and large chests.
► In a close-up shot, two krill see two jellyfish swimming by, and the jellyfish closest to the camera pops out about a dozen babies.

VIOLENCE/GORE 4 - Several scenes feature ice packs in Antarctica cracking and caving and two scenes include tidal waves that rush toward the audience. A huge section of a glacier cracks gives way with loud cracking and falls loudly into an ice canyon where thousands of penguins are trapped (they are unharmed). Ice melts in places to show green plants and two earthquakes occur, all of which are attributed to the magic powers of a puffin by a clan of penguins. Several scenes depict penguins walking along narrow ice cliffs, sliding down hills of ice and snow (like ski jumps), hurling themselves accidentally into ledges and drifts of snow and falling in icy water (none are hurt).
► Changes in an ice pack create a canyon in which many penguins become trapped; humans try to cut them a path out, but are unsuccessful, and other penguins and elephant seals create an avalanche that makes a path out of the canyon.
► A male elephant seal falls to an icy cliff when his ice bridge breaks, he falls again and we see him bang hard into the side of a chasm and hear that he cannot move because he is wedged into ice; a penguin slides down the bridge from the other way, goes under water, finds a transparent ice wall between him and the seal and tries to break it with his body weight, but he's unsuccessful (the penguin shakes its body and head in some pain as he swims away, but we see no injury).
► A puffin is nearly eaten by three polar bears: we see a crack in his beak afterward that has 4 stitches in it and creates water bubbles when he sneezes. Two sharks chase penguins under water, showing large white teeth, but they do not capture anything. A penguin provokes a shark to follow him, the shark bellows and dives from an ice floe after the bird and straight into an ice wall that breaks to release a trapped seal (no one is hurt).
► A krill becomes lost and ends up in a canyon of penguins, where he is bounced around on their feathers and feet, swallowed and regurgitated, caught in human's caps and hair, bounced off ice picks and a running chain saw and finally falls into a dark watery cavern to be reunited with his krill swarm.
► Humans on a ship save a puffin and we see him in a body cast and a metal halo, and then in a pressure garment around one wing and chest. A night scene shows an oilrig burning and a huge penguin drowning in an oil slick, but humans save him, bathe him and give him a sweater.
► There are several instances of face slapping: A penguin chick slaps an elephant seal in the nose and says, "I'm gonna tear you a new nostril!"; a seabird on a cliff slaps another in the head twice and says, "Idiot!"; a krill becomes hysterical and his krill friend grabs him by the shoulders and slaps him in the face; and a penguin slaps the leader of the clan in the head and the leader says, "I deserved that." Two elephant seals fight by banging their chests together (neither is injured).
► Tiny krill become huge as they swim into the audience with bulging eyes and many tiny legs and feelers. A krill is easily frightened and screams several times at shadows. Two krill get lost in a dark underwater cave that is spooky, but they escape.
► A puffin looks as we twice see a close up of 8 rotisserie chickens cooking and a man eating a greasy chicken leg; the puffin faints and when he awakens, persuades a penguin to leave the ship they are on and they swim away.
► Thousands of penguins pull fish from the sea for food and many are seen eating the fish (all the fish appear dead and do not move): hundreds of sea birds try to steal the fish, but penguins slap the other birds out of the way, and the seabirds try to eat penguin chicks, but are again slapped out of the way and fly to a cliff to sit. A huge whale swims toward the audience with opened mouth and we see millions of krill being swallowed; one krill says to another, "So this is all we are -- lunch." A krill chews on a seal's posterior, saying, "I want to eat something with a face" to move up the food chain.
► A penguin attacks a puffin, snarling, "OK! This Mr. Up is going down"; other penguins hold him back. Penguins and seals argue about their species and whether they should or should not take care of only their own kind.
► A penguin chick falls headfirst into a watery hole in the ice and we see him defecate twice. Seabirds fly over the heads of penguins and defecate on the head of one penguin in two scenes. A puffin flatulates at the sight of humans.
► A penguin suffers a temporary lame foot from dancing and a few other penguins say their feet hurt as well.

MESSAGE - All the species of Earth can work together and everyone can contribute. 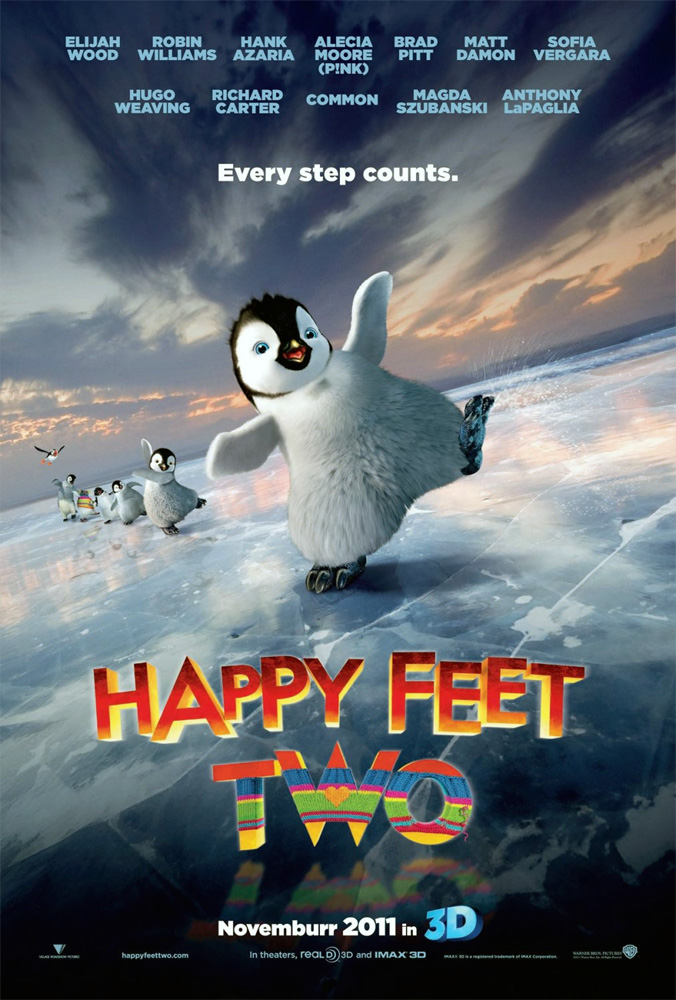