Why is “Happy Death Day 2U” rated PG-13? The MPAA rating has been assigned for “violence, language, sexual material and thematic elements.” The Kids-In-Mind.com evaluation includes a few kissing scenes, cleavage exposing outfits, several scenes of murder, accidental death and suicide with bloody results shown, and a couple of F-words. Read our parents’ guide below for details on sexual content, violence & strong language.”

In this sequel to 2017’s Happy Death Day the Groundhog Day premise continues with a college student (Jessica Rothe) entering another time loop, and repeating a nightmarish cycle of death after death after a night of drinking. In this new cycle she must defend not only herself but also all her friends and a sorority from a band of murderers in baby face masks. Also with Israel Broussard, Ruby Modine, Suraj Sharma, Sarah Yarkin, Rachel Matthews, Phi Vu and Steve Zissis. Directed by Christopher Landon. A few lines of dialogue are spoken in Asian languages with English subtitles. [Running Time: 1:40]

– A woman wearing a bra and underwear that reveals cleavage, bare shoulders, midriff and thighs falls out of an airplane (please see the Violence/Gore category for more details) and falls in slow motion with two obscene hand gestures and a smile, in front of a couple that is kissing passionately on a bench (the woman’s hand is on the man’s knee and thigh). A woman wakes up on several mornings in a man’s dorm room: in three of these scenes she wears a T-shirt and underwear (we see her bare legs up to the top of the thighs), in two other scenes he lies on top of her (both are clothed) kissing her briefly and then stands up. A man wearing only a towel from waist to knees reveals his bare chest, shoulders and abdomen in a woman’s dorm room; seeing two women in the room, he says, “Nice, a three-way,” and one of the women slaps his chest twice in anger and he winces.
► A couple kisses on a bench in a few scenes. A woman kisses a man in a hallway for several seconds. In a scene in a washroom, a woman stands behind a man with a gun at his head and says, “Put it away,” and we hear a zipper zipping below the frame, but see no flesh.
► A woman wears a tight, low-cut top that reveals cleavage and her tight, short skirt bares her legs to mid-thighs and she wiggles as she walks. A woman wears a tight, short dress that reveals cleavage and bare legs to the upper thighs. A woman appears for several seconds wearing short shorts that end at the upper thigh.
► We hear that a married doctor and professor nicknamed “Professor [sexual reference deleted]” has been having an affair with a student nurse, but we do not see them interact. A woman shouts at a man in a hallway, “You are gay!” A woman sees a man with another man and gives him the thumbs up sign, but he just shrugs. A woman asks a man if he accessed spam-porn on a lab computer; he shakes his head. A woman asks another woman if she is pregnant and the answer is “No.”

Happy Death Day 2U SUBSTANCE USE

- A woman pulls an IV line connected to a clear liquid out of her arm (there's no blood), and we see two rows of bottles of chemicals and several bottles that look like prescription medications in a lab. A few men and women speak of drinking but we do not see any drinking.

- Every day provides a chance to become a better person. 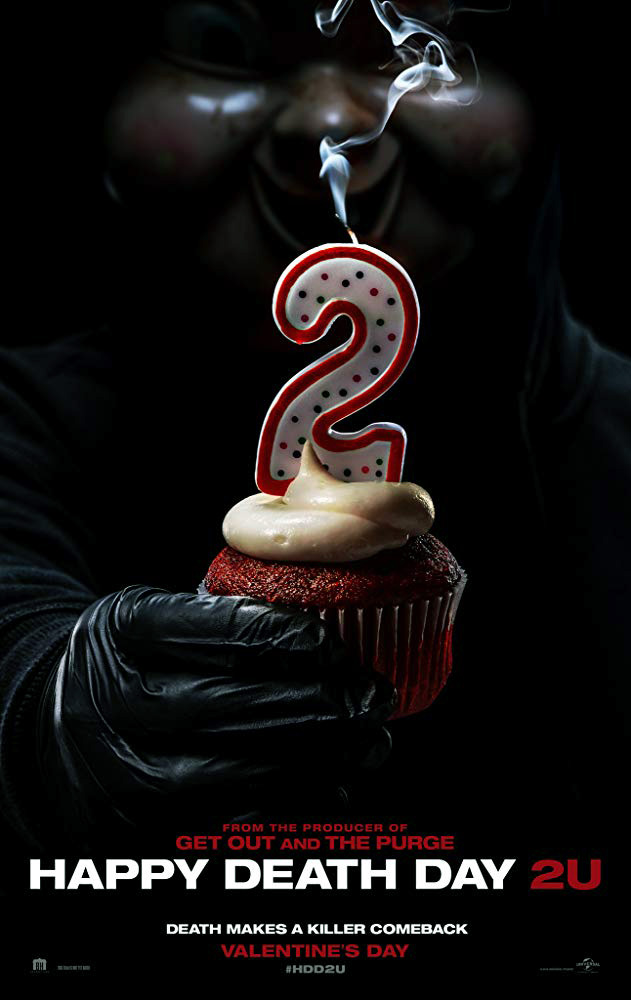