A man (Jason Lee) wakes up after his wild bachelor party to find a woman in his bed. Since he can't remember much about the night before, he assumes that he's been unfaithful to his bride-to-be. So, driven by guilt he spends the week before his wedding frantically trying to cover up his assumed infidelity. Also with Julia Stiles, Selma Blair, Lochlyn Munro and Thomas Lennon. [1:41]

SEX/NUDITY 4 - A man imagines kissing a woman passionately, and a man and a woman kiss several times in several different scenes. A woman puts gravy on a man's lips, then licks it off and they kiss. A man and woman wake up in bed together; he is bare-chested and we see her bare shoulders as she gets out of bed and wraps up in a sheet (the man and woman talk about her not being able to find her underwear). A man holds photographs that he describes as pornographic and explains that his young son was found standing over them; it is insinuated that the boy was masturbating (the photos appear sticky). A man admires a woman and then himself in a mirror. Three women dance in grass skirts and flowered bikini tops at a bachelor party. Two men dance together and one of the men remembers it fondly later. Women wear outfits that reveal cleavage, bare backs, and bare abdomens. A painting of a nude woman hangs on the wall of a bathroom (we see her from the side). A man takes off his shirt while changing his clothes and we see him bare-chested. A man scratches his crotch violently, he puts a pointer down his pants to help him scratch, and another man in a different scene scratches his crotch. A woman talks about having found her boyfriend in bed with two other women. A man and a woman talk about not having slept together and contracting venereal disease. A man and a woman talk about a pair of women's dirty underwear. A man sits on the toilet with his pants around his ankles, and a man stands at a urinal in a public restroom. There are several references by men to the idea that it is OK for men to have affairs and that it is instinctual.

VIOLENCE/GORE 3 - A man punches another man in the stomach (he falls to the ground), then punches him in the nose (we see some blood), cracks eggs on his head, stuffs a cheese curl up his nose, pours chocolate milk on his head, forces him to get into a dumpster, closes the lid and rolls the dumpster down an alley and it crashes into a light pole (we see that he has a bloody eyebrow later). A man is slammed against a window and thrown into a wall (he passes out on the floor). A woman grabs a man's crotch and squeezes (he winces and grimaces and we hear crunches), a man holds another man around the neck and says he's in the "death grip." Police barge into an apartment with guns drawn, grab a man and put him in handcuffs, and the man lunges at another man. A man imagines being punched in the nose (we see some blood), a man imagines a woman yelling and screaming at him, a man imagines a woman jumping on his back and shoving a pair of underwear in his mouth, and a man imagines beating another man up with punches, kicks and tossing him into a table that crumbles. A man and a woman are threatened by a snarling, snapping, barking dog and they hide in a shower stall with a glass door (the dog continues to bark and jump at them). When the dog gets into the shower they get out and run. A man chases a taxi through a city street. A man smacks a man in the face with his sandwich. We hear a man in a bathroom stall complaining of a burning sensation. A toll booth gate slams down on the hood of a car a few times denting it, and then the driver drives through the gate breaking it. A man climbs out of a window, onto a tree, and onto the hood of a car; the car alarm sounds and another man runs out of a house with a baseball bat, and then with a shotgun containing salt pellets and fires it into the tree. A man sets photos on fire, and people yell at each other in a few scenes. A man pretends to have diarrhea, we hear him grunting, groaning, and he squeezes a shampoo bottle that spurts to give the impression of a bowel movement. A woman trips and falls while walking down an aisle.

SUBSTANCE USE - People are shown drinking alcohol. A character blows smoke out of his mouth; although we don't see him smoking it is implied that he has been smoking marijuana. Gravy is laced with marijuana at a party and all the attendees show signs of inebriation. A man is arrested for cocaine possession.

MESSAGE - We shouldn't be afraid to take chances. Doing only what is safe won't make us happy. 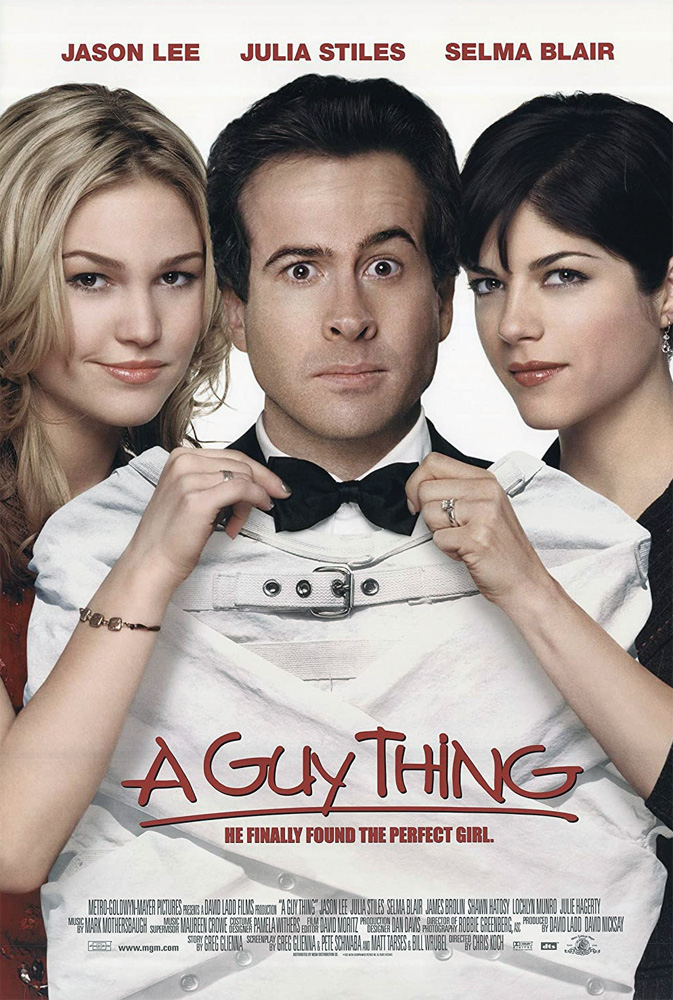