Why is “The Guilty” rated R? The MPAA rating has been assigned for “language throughout.” The Kids-In-Mind.com evaluation includes many tenses scenes of a 911 operator speaking to callers about emergencies and crimes being committed with yelling screaming and cursing, a bloody scene at a house with two blood soaked children, an attempted suicide, a scuffle and attack with a brick, and over 50 F-words and other strong language. Read our parents’ guide below for details on sexual content, violence & strong language. Awaiting trial for a police related shooting, a demoted detective (Jake Gyllenhaal) is reassigned as a 911 dispatcher in Los Angeles. When he receives a call from a woman claiming to have been abducted, he tries to figure out who she is and what he needs to do to save her, but soon discovers that nothing is as it seems. Also with Christina Vidal and Adrian Martinez, and the voices of Riley Keough, Peter Sarsgaard, Eli Goree, Ethan Hawke, Da’Vine Joy Randolph, David Castañeda, Beau Knapp, Edi Patterson, Paul Dano and Gillian Zinser. Directed by Antoine Fuqua. A line of dialogue is mumbled in Spanish without translation. [Running Time: 1:30]

– A 911 operator calls a kidnapped woman in a van and instructs her to pull the van’s handbrake hard; she does, we hear tires screeching and someone yelling, the operator tells her to find something to defend herself with and she finds some bricks, which the operator tells her to use to hit her ex-husband in the head hard because he deserves it and the woman cries, saying, “I’m gonna die” five times and, “I don’t wanna die. A woman says that her baby was in pain from “snakes in his stomach” and she “took them out” and then she cries about blood on her shirt and hands and not knowing whose it is as the man driving a van that she is in stops and she hits him with a brick; we hear a thud and a scuffle before the phone disconnects.
► The film takes place in a dimly lit 911 call center during California wildfire emergencies, with several big screen TVs that show smoky skies, burning trees, a police cruiser in flames and people running; we hear different 911 calls with men and women calling in with tense, often loud and hysterical voices to report robberies, fires, traffic incidents, mayhem and a kidnapping, but we do not see any of these events. Men and women on 911 calls often curse and one 911 operator also curses, speaks harshly to some callers, and in a few scenes, slams his fist on a desk, slaps away a desk lamp, and screams with rage.
► A 911 operator works an extra shift overnight on a time-consuming emergency, going into a private office so he will not be interrupted when he answers a call from a whimpering woman that was abducted; when he calls the woman’s home phone and speaks to her six-year-old daughter, she tells him that her mom left with her father and her baby brother was afraid of a knife. A 911 operator learns that a man suspected of kidnapping his ex-wife has served prison time for assault; he calls the man and demands to know where he is taking his ex-wife, but the man hangs up and the operator calls his ex-partner to go to the man’s house and kick in the door. A young girl calls a 911 operator as two officers arrive at her house and the operator instructs her to let them in; the officers see blood on the floor and the girl’s shirt and hands, find a baby also covered in blood, they shout, the girl screams, and the phone disconnects. A man sobs, saying that his wife had been off her medications because they could not afford them and unknowingly hurt their baby during a psychotic break; he adds, “She killed my son. My son is dead.”
► A woman calls a 911 operator from a freeway overpass and says, “I’m gonna go be with the baby” several times, implying she will jump and the operator directs CHP to the overpass while he tries to talk her down from the bridge. A 911 operator aggressively questions a man who calls in to report a robbery; the operator learns that the man was robbed by a woman who “jumped in his rented BMW” and the operator directs the police to help the man. An angry man says he will be on trial the next day for an unnamed crime. A man tearfully admits over the phone that “I killed a man; a boy actually, 19 years old; I don’t know why… because I could.”
► A man runs to a washroom, coughs and gags, uses an inhaler, then runs into a stall where he kneels and vomits white and brown material into the toilet (we see goo); he shudders, gasps, sits on the stall floor, phones his former police partner, tells the officer to tell the truth at the trial, and the officer says, “They will burn me. You won’t see your daughter for years.” We hear an audio broadcast that an ex-police officer pleaded guilty to manslaughter and was convicted. A 911 operator is unnecessarily harsh with some callers, snaps at coworkers, grimaces, curses, and in a few scenes, uses an inhaler for unknown reasons. We hear that the air is dusty and smoky because of long-term wildfires nearby. A 911 operator is berated by a call center supervisor several times and is finally told to change his attitude. A 911 operator is berated and or yelled at over the phone by a supervisor, his ex-sergeant, his ex-partner, an officer, his ex-wife, and a couple of impatient 911 callers who have minor incidents. A child tells a police officer, “You hurt people.”
► We hear an unseen toilet flush in a washroom.

The Guilty SUBSTANCE USE

– A man dissolves Alka-Seltzer in water (he does not drink it). A man tells a 911 caller that he should not use “speed” and is responsible for his own deteriorating condition, a man says police captured four kilos of unnamed drugs, a man tells a 911 caller who has fallen from a bike and injured his knee not to use the bike while drunk, and two men argue over the phone about drinking while one is not supposed to drink (alcoholism implied) and one man admits that he had two drinks (the other man says the second man can still drive). 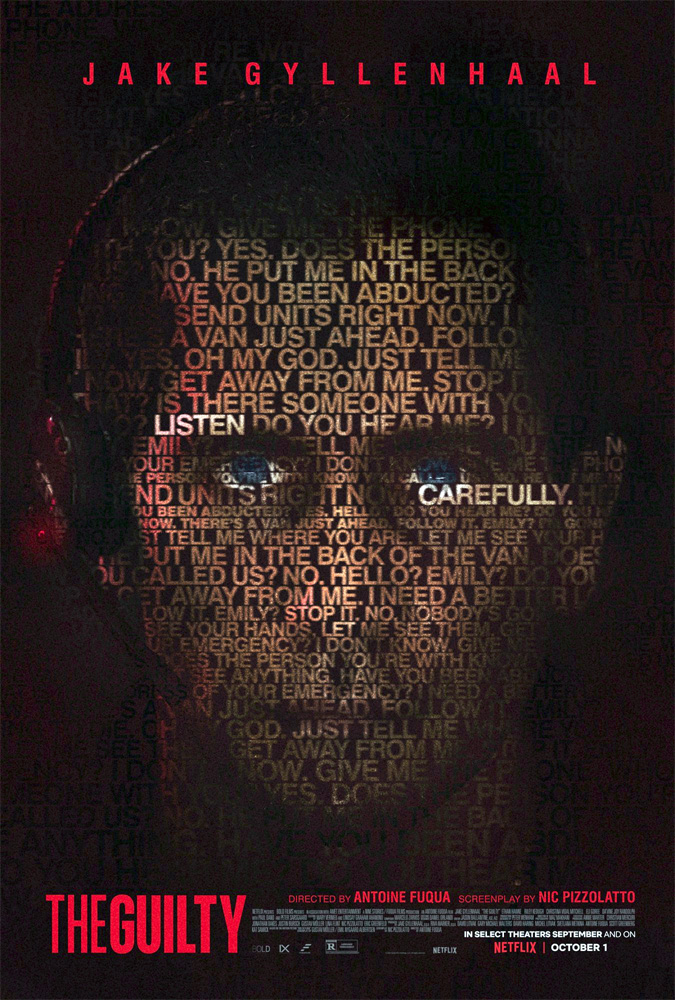