Why is “The Grinch” rated PG? The MPAA rating has been assigned for “brief rude humor.” The Kids-In-Mind.com evaluation includes several scenes of property damage and dangerous antics that do not end in visible injury. Read our parents’ guide below for details on sexual content, violence & strong language.”

Every Christmas the Whos ruin the peace and quiet of the Grinch (voiced by Benedict Cumberbatch) with joyous celebrations. So, when one year the Whos announce they will make Christmas three times bigger, the Grinch decides to steal the holiday and silence it by posing as Santa Claus on Christmas Eve. However, young Cindy Lou Who (voiced by Cameron Seely) gathers her friends to trap Santa so she can ask him to help her single mom. Also with the voices of Rashida Jones, Angela Lansbury, Pharrell Williams, Ramone Hamilton and Kenan Thompson. Directed by Yarrow Cheney and Scott Mosier. [Running Time: 1:26]

– A male reindeer and a female reindeer rub noses.
► When a young boy picks up a cookie attached to a string, the string pulls tight and rips off his clothing; he then holds the large cookie in front of his groin area. A furry character wears shorts with the words Go Time on the buttocks and twerks mildly toward the camera.

- A green creature is caught in a foot noose that jerks him up to a ceiling fan, and a little girl releases the rope to drop him on his head, but he is uninjured and he leaves with his dog; they strain to push an overloaded sleigh up a snowy hill and cliff until at the top, the sleigh begins to topple, but an anchor shoots out and holds it, the cliff cracks apart and the green creature goes down with the sleigh until a reindeer grabs the rope, and pulls everything back to safety with help from other animals pulling the rope.
► A green creature is chased up a wall by a large barking dog, he climbs higher and lies on a stone awning as the dog chases him up another floor, where the creature falls and swings from a string of lights through glass doors to a living room, shouting as glass breaks with some tinkling; he swings back out as a large sleigh slides off the roof, he jumps in and steers it to his own home.
► A green creature with a huge snowball in a catapult falls over a ledge, grunts, and falls through the air into a large decorated fir tree where he bounces off and back on to hang by a foot; he eventually falls to the ground, unharmed, but grimaces at bright lights on the tree. A green creature slides through snowy roads as a large reindeer pulls him by a rope, until he hits a tree and falls, but is unharmed. A sleigh puts out a large pincer that snaps onto its reindeer's tail to make it run faster; the animal yelps and runs with the vehicle through the snow and over a frozen pond, sliding. A dog hanging from a drone flies through a town and nearly hits a man; the drone flies into a kiosk of hanging bunches of sausage and cuts them up, the dog falls to a snow drift unharmed and flies back home hitting the snow-covered roof but is uninjured. A green creature and a dog walk through a blizzard, their fur stiffened into icicles and the creature falls into deep snow and shouts in pain as a large reindeer nibbles on his topknot. A large reindeer jumps into a green creature's bed and rolls over onto him, but no injury occurs. A young girl races down a slalom and across rooftops in an inner tube; she hits a green creature who yells at her, and a huge plastic snowman inflates and knocks him to the ground unhurt. A woman chases a bus and falls but is uninjured. A man runs into a string of wreaths and bounces off into the air off-screen (he does not come down).
► A green creature dresses like Santa Claus and has a small dog pull a large sleigh as they steal decorations from 228 houses as well as wrapped presents, Christmas trees, and everything to do with the holiday: strings of lights break with a tinkle, a cat jumps toward the creature and he shouts, the creature uses a large candy cane as a vacuum to accumulate presents and two other large candy canes to shoot nets around large piles of gifts as we see white flashes rushing from the ends of the canes.
► A giant fir tree is transported by drones and a house on the slope of a mountain begins to shake. A character inside a house attacks an alarm clock, throwing a book, a large metal object, and a small chest of drawers onto it with loud thuds. A green creature breaks a jar of jam across the floor in a grocery store with some tinkling noise. Two toddlers throw bowls of oatmeal on the floor below the frame. A large reindeer breaks several dishes in a kitchen with some tinkling china sounds.
► A flashback shows a character in an orphanage as a child, looking sad. A character shouts at a girl, a dog and a goat. A house has warning signs posted outside: Go away! Leave now! Stay away! A small goat screams like a banshee, startling two other characters; the goat screams again in two other scenes.
► People are seen wearing costumes like a three-eyed sock monster, a Christmas dragon and a dinosaur.
► A green creature runs his finger over a dog's tongue and then flips pages with the finger. A green creature licks his hand and straightens a dog's topknot. A dog and a green creature ride in a convertible and let their tongues hang out. A green creature drinks milk and sprays it toward the camera in surprise. A green creature snores for several seconds and a large bulldog snores loudly in a doghouse in a few scenes. A green creature sprays Moldy Spice deodorant under his arms and into his mouth. A green creature eats massive bowls of spaghetti and other sloppy foods, spilling them over himself, his chair, and a table. A large reindeer sprays whipped cream into its mouth and it comes out his nostrils.
► A green creature gags on a pickle and spits it back into the jar in a grocery store. A squirting syrup bottle sounds like flatulent noises.

The Grinch SUBSTANCE USE

- A punch bowl and glasses hold punch that may or may not be alcoholic (no one drinks from the glasses). A green creature drinks a lot of coffee throughout the film.

- The joy and kindness of Christmas can melt the coldest of hearts. 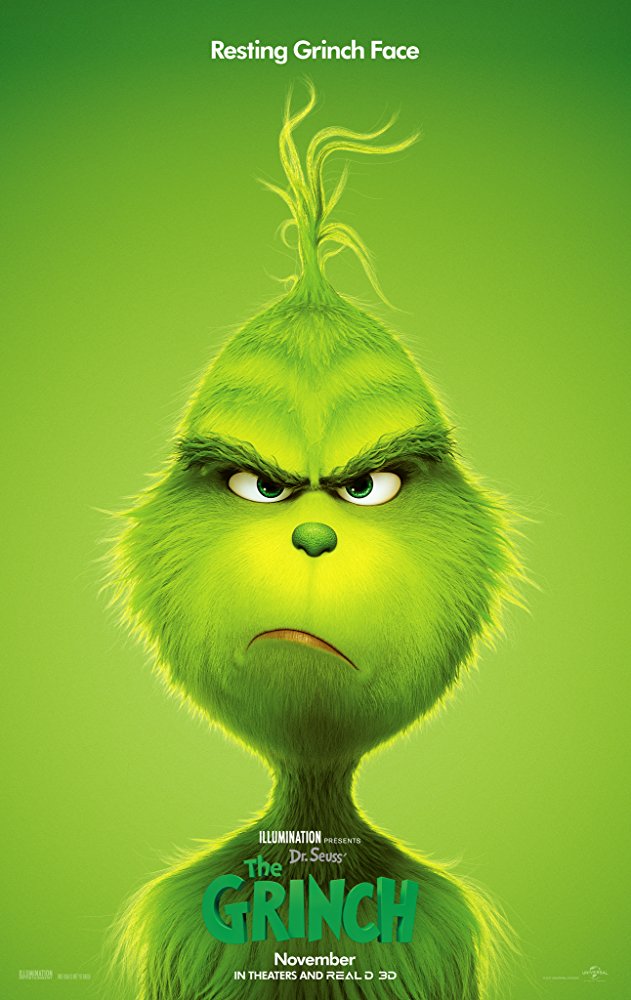