A U.S. Army Chief Warrant Officer (Matt Damon) deployed in Baghdad during the "Shock and Awe" stage of the Iraq war is sent on one mission after another to scout out areas identified as housing WMDs. After every one turns up nothing he begins to question the veracity of the intelligence reports and ultimately questions why the U.S. is even there. Also with Amy Ryan, Greg Kinnear, Antoni Corone, Nicoye Banks, Bijan Daneshmand, Jerry Della Salla, Jason Isaacs, Brendan Gleeson, Igal Naor and Khalid Abdalla. Directed by Paul Greengrass. [1:55]

SEX/NUDITY 1 - A woman wears a low-cut tank top that reveals cleavage in a couple of scenes. Men and women wearing swimwear sit and walk around a swimming pool.

VIOLENCE/GORE 7 - A military team storms into a house, shoots many men (blood spurts and sprays) and one man at point blank range in the head (no blood seen). A man is shot several times (blood spurts and we see him fall to the ground and later with a pool of blood under him). Two men are shot and a grenade explodes throwing two men into the air. Two men are shot (blood is seen on their faces and necks) and a man is shot in a street (we see him fall dead).
► A military team with guns drawn enters a house, they search for a man, we see women and crying children rushing out of the way, gunfire is exchanged and we see a few people struck (blood splatters on the walls and a pool of blood collects under one man).
► Two men fight with punches and kicks and one man shoots the other in the stomach (we see blood on his shirt and the wall behind him). Two men are shot at: one is shot dead (we see him fall to the ground) and the other is chased and held at gunpoint.
► We see a soldier on the ground with a bloody leg wound and he screams from the pain. A man in a car is shot at (the car windows shatter), and another man in the street is shot and we see blood spray.
► Gunfire is exchanged between a military team and a sniper and the sniper is shot (we see a jerking movement through an open window and we hear a grunt but no body or blood is visible).
► We see huge explosions with large balls of fire light up the night sky. We hear bombs dropping, sirens blaring and news reports of an attack on Baghdad. We hear and see people panicking and running through buildings as they crumble around them.
► A prisoner is shown lying on a jail cell floor and when he is rolled over, we see his very bloody and swollen face (it is implied that the prisoner dies). We see a man lying dead on the floor with blood pooled under him.
► A man is struck in the head with the handle of a gun and then punched in the face. A man punches another man in the face (he has a bloody nose), they fight and several others around them begin to fight (we see shoving and punching, but no one appears seriously injured). A man interrogates another man and grabs his throat causing the man to gag and gasp. A prisoner is shown with blood on his head and face after an interrogation.
► We see prisoners on their knees and held at gunpoint, dogs are barking viciously and other prisoners have bags over their heads in several scenes. We hear prisoners moaning behind jail cell doors.
► A military team blocks a car in the road, and pulls the men inside the car out and holds them at gunpoint. Two cars speed toward a man in the street, the man is grabbed and pushed into one of the cars, and is taken into a building and forced into a chair.
► A man is chased through an alley, he tries to climb a wall, another man grabs him by the leg and his leg falls off (it's a prosthetic leg). A man follows another man through many parked buses and then to a dark alley.
► A military helicopter is struck mid-flight by an RPG, it spins out of control and in flames and crashes to the ground.
► A military team prepares to search a chemical weapons facility: we see people looting and running out of the compound and we hear that there is a sniper inside. A military team suits up with gas masks when entering what they think is a chemical weapons compound.
► An armed soldier chases two men through a house, and women and children scream and run. Military vehicles are blocked by civilians who are protesting in the streets, several soldiers get out of the vehicles and confront them, and there is some shoving and yelling.
► A man gives an order to kill another man. A man announces that his military team is on a "kill no capture mission." A soldier yells at a man. People argue bitterly in several scenes. Men discuss the future of Iraq and several argue about their vision of what is going to happen.
► A man tosses a nearly full bottle of urine at another man, who complains and calls him names. A man spits on another man. We see a warehouse that is covered with decayed bird droppings. We see a bombed out city in several scenes.

SUBSTANCE USE - We see many people holding beer bottles around a swimming pool and again in a lobby, and a man asks if he can have a beer (the reply is no). A man smokes a cigarette, and men are shown smoking cigarettes during a meeting.

MESSAGE - It is not for the U.S. to decide what happens in Iraq. 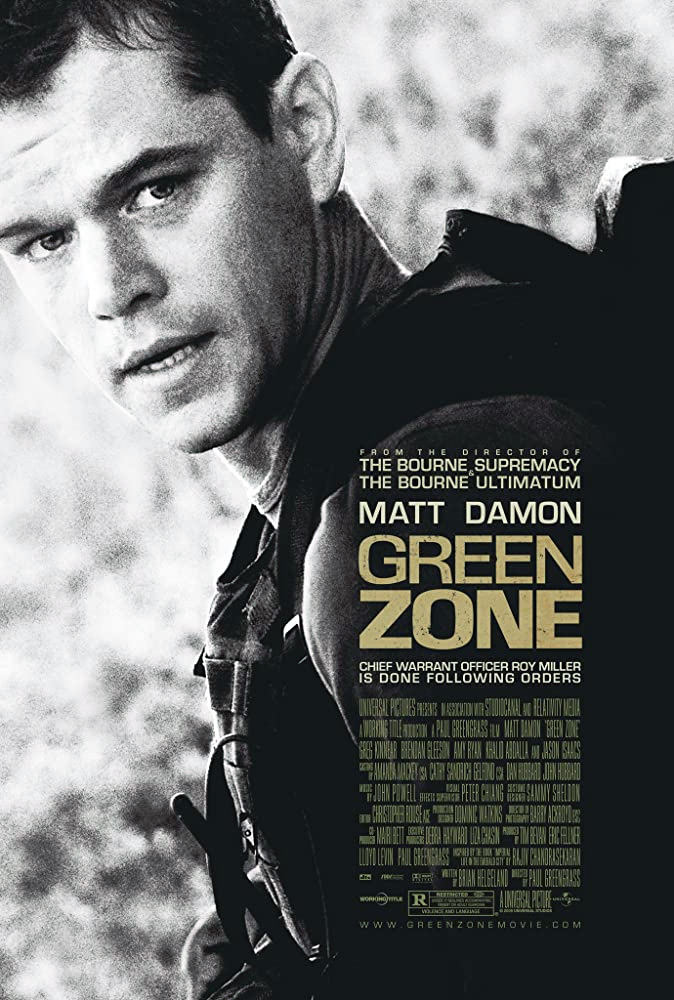