Doug (Seann William Scott), a bouncer out of place in his brainy family, finds himself drafted to join a semi-pro hockey team made up of other misfits. He soon leads the team to glory, punching out anyone that stands in his way. Also with Jay Baruchel, Alison Pill, Liev Schreiber and Eugene Levy. Directed by Michael Dowse. [1:32]

SEX/NUDITY 7 - A man has sex with a woman who is bent over a table: we see a portion of her bare breasts as the man continues to thrust and three older men watch when the man gives them a thumbs up and continues to have sex with the woman. A man opens a door, we see another man on top of a topless woman (her bare breasts are visible) and sex is implied.
► A man asks a woman if she would like to kiss, and the man and the woman kiss passionately until the woman pulls away. We see a man and a woman kissing passionately. Two women and a man kiss, the man pulls away and watches the two women kiss passionately. Several people watch as two young men kiss, and one man lifts the other and spins him around. A man and a woman lie side by side in bed, fully clothed, holding hands.
► Two men wearing underwear and jock straps crudely thrust against a man's hockey goalie helmet as they make crude remarks about the man's mother's genitals and having sex with her (we see pictures taped to the helmet and they are presumably the helmet owner's mother).
► Two men tell several other men to write on a passed-out man's genitals, they make crude remarks about the two men being gay because they want to write on a man's genitals and a third man offers to sign a man's genitals after two men tell him that he has female genitals.
► A man wearing nothing but brief-style underwear asks another man if he had ever masturbated while high on drugs; the man then puts on a robe and walks away, implying that he's is going to masturbate.
► A woman tells a man that she is "horny a lot" and then crudely says that she is sexually promiscuous. A woman tells a man that he makes her want to "stop sleeping with a bunch of guys." A man makes a crude remark about a man possibly giving a group of single mothers "herpes." While announcing a hockey game a man tells the crowd that he is going to "make love" to his wife. A man tells another man that he had been invited to watch his cousin perform in a strip club; he remarks half-jokingly that it might seem odd since they are "family" although he would be attracted to the idea. A man shouts a crude sexual response to several men about homosexual pornography and two men chant the same phrase in response. A man makes a crude sexual joke to another man about being interested in him, sexually. A man makes a series of crude sexual gestures toward another man as a joke. A man crudely tells another man that a person, as a joke, had offered him "50" male genitals to perform oral sex. A man makes a crank call to a television show, making a crude joke about a man preferring performing sex on male genitals.
► We see a man lying in bed, shirtless and his bare chest is visible.

SUBSTANCE USE - A man snorts cocaine off a woman's bare back and we see men taking video with their cameras, a man takes a pill from a bottle and makes a remark implying that he had taken Ecstasy, a man tells another man not to take his prescription pain medication and then asks if the man has any prescription pain medication, a man tells a group of people that he is high on painkillers and another man asks if he would share and the man agrees. Throughout the movie we see men and women drinking alcohol at bars and at home, a man drinks what is presumed to be liquor from a sports drink bottle while telling a man that a second man is drinking "a lot of hand sanitizer," a man drinks to inebriation repeatedly, and a woman tells a man that she is trying to cut down on her drinking (we see a series of empty beer bottles in front of the woman as she takes a drink). A man rolls and smokes cigarettes, men throughout the movie smoke cigarettes, and men chew chewing tobacco.

DISCUSSION TOPICS - Living out a dream, regret, revenge, fights in hockey, disappointing your parents, working with what you've got, redemption.

MESSAGE - Try your best to do your very best. Hockey is a violent sport. 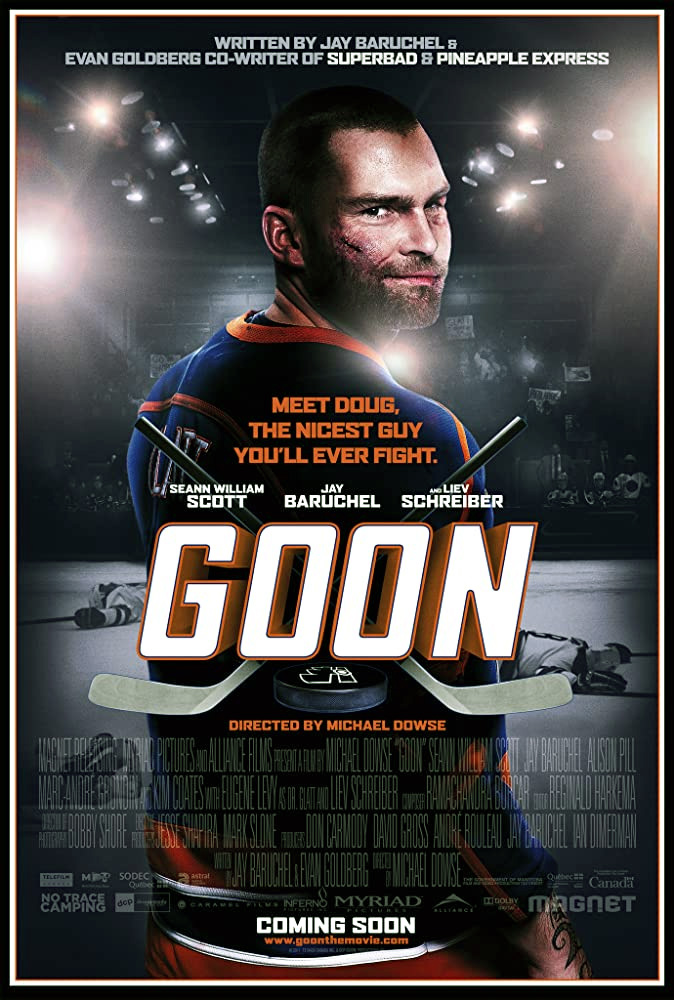