Set in the future, after a catastrophe, the film describes a utopian society where an all-powerful Council of Elders controls everything and all actions are carefully controlled in an attempt to avoid all conflict by removing race, love, sex, ambition, color art and individuality. The Giver (Jeff Bridges) serves as the repository of global memories and advisor, until he grows old and must train a younger replacement, a teen boy (Brenton Thwaites). Based on Lois Lowry’s 1993 Newbery Medal-winning young adult novel. Also with Meryl Streep, Odeya Rush, Katie Holmes, Taylor Swift, Cameron Monaghan and Alexander Skarsgård. Directed by Phillip Noyce. [1:35]

SEX/NUDITY 2 - A teen boy kisses a teen girl and she says, "What was that?" and she becomes frightened and walks away. A teen boy looks out his window and admires a teen girl in a window across the way, brushing her hair; he later dreams of himself and the girl kissing briefly in the woods after attending a wedding. A teen girl refuses to go away from home with a teen boy, but kisses him goodbye.
► People of all ages are not permitted by the rules of the world to touch anyone outside their own nuclear family unit and they are not allowed to kiss or hug family unit members. Couples apparently do not have sex, but it is unclear how the women become pregnant, other than the government assigning them to this career; women and men are chosen to work as nurturers, caring for the babies, whom the birth mothers never see again and nurturing center staff deliver babies to the doors of chosen "family units" on assignment. The world government requires its communities to be asexual, but to adhere to strictly assigned biological-male and biological-female clothing uniforms.
► Footage plays in a slide show of pregnant women with huge bellies, lying clothed in hospital beds. A newborn baby is held in a gloved hand in close-up, its skin red and a little wet and the mother smiles in a hospital bed in the fuzzy background.
► Elders of a community watch a tape of a teen boy and a teen girl kissing and an older woman asks, "What are they doing?" and a woman says that love leads to sex and murder, so emotions must be stopped. An assigned mother tells her children that the word "love" is antiquated and no longer applicable.

SUBSTANCE USE - Daily drug injections suppress all emotions and we see children pushing their wrists against an injection device on a wall of their homes, a teen girl receives an extra dose of an emotion suppression medication in a large hypodermic needle that we see inserted into her arm, we hear that a boy is never to take any other medications than a morning prescription, we see that a boy does not take any medication, and we hear that euthanasia occurs daily with injections and see a large bore needle stop above the skin of a teen girl's arm. A man pours a wine glass of bubbly white liquid that could be wine for himself and a glass of water for a teen boy and they both drink. 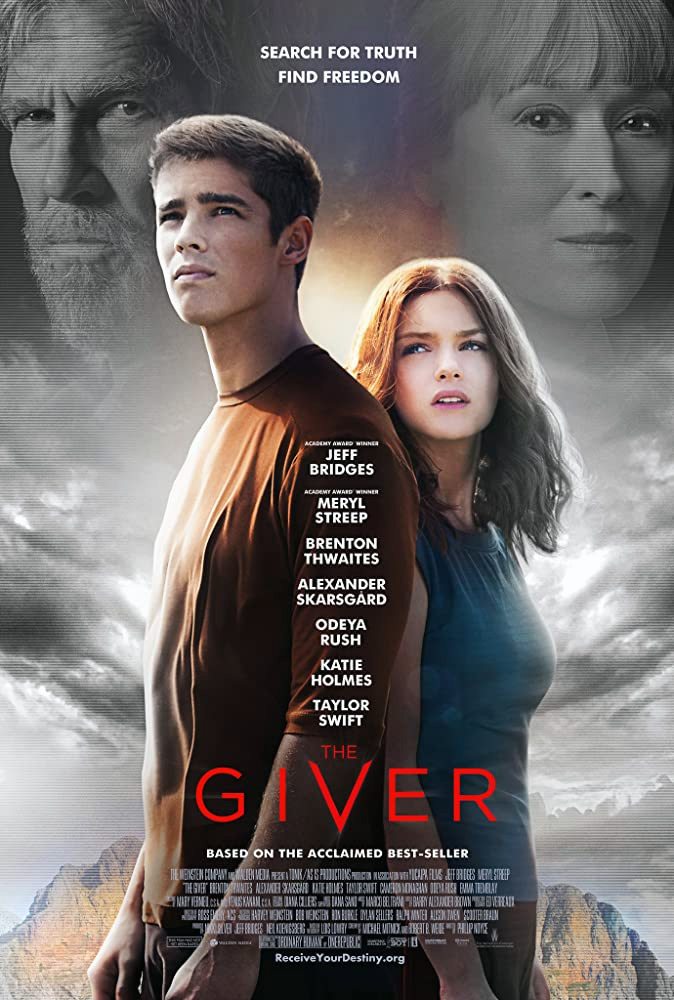