Nicolas Cage resumes his role as The Ghost Rider, aka Johnny Blaze, returning to settle another score in this sequel. While in Eastern Europe, Johnny is asked to help the church save a boy (Fergus Riordan) from the devil (Ciaran Hinds). A villain (Johnny Whitworth) interferes and makes Johnny angry, releasing the Rider and wreaking havoc. Also with Christopher Lambert, Idris Elba and Violante Placido. Directed by Mark Neveldine & Brian Taylor. [1:35]

SEX/NUDITY 2 - A woman lies dying in a cave at night and we hear a man's voice ask if she wants to make a deal and she nods; the screen blacks out and we hear that she had sex with the devil and bore his son, who is presently about 9 years old.
► A man tries to kiss a woman, but she pushes him away. A businessman in a café approaches a woman and asks if she is a gypsy wanting business (implying prostitution) but the woman's son appears, causing the man to quickly leave. A man tells a woman that she used to be his girlfriend.
► In several scenes, a woman wears a tight T-shirt covering large breasts; there is very little exposed cleavage. We see a man without a shirt.

VIOLENCE/GORE 7 - A middle-aged man with one bloody eye is identified as the devil; he turns a younger man into the Power of Decay, and touching dozens of people makes them turn to stone or ashes.
► Creepy looking monks wear tattoos of scripture covering their faces and bald heads, they touch people on the throat, making the people pass out, and they form a circle and put a young boy in the center on a rock in order to behead him; a monk raises a cutlass, but is stopped by a demon, they fight and all the monks turn to ashes and stone. We see a burned out industrial area with blackened machinery and a firefighter is attacked by a demon and turns to ash.
► An Orthodox church in Turkey is guarded by ninjas wearing black, the sky turns yellow and red, then black, two men and a woman shoot perimeter guards with high-powered rifles, ninjas fall (presumably dead) and many black-robed and hooded spectators chant incantations as the devil (as an old man) and his young son sway back and forth on a stage: A man shoots guards and spectators, another man tries to grab the boy, the man is grabbed himself and begins to turn to ashes, the boy breathes fire into a man's mouth, the devil pulls the boy into an SUV and drives away, the Ghost Rider flares up, chases the devil and three other SUVs, vehicles drive off the road and explode, the Ghost Rider encounters a demon, he sucks the soul out of him (he turns to ashes), the Ghost Rider wraps the devil in a long chain, and flings him up and then down into the center of the earth, where we see him flaming and screaming as the Ghost Rider laughs and shouts.
► Man shoot several monks in a monastery using automatic weapons (we see the monks fall, presumably dead, but without visible blood); a man falls over a balcony to the floor and the camera cuts to other men shooting at a mother and her son running from the building (no one is injured), men chase in SUVs, an SUV drives off the road, crashes and erupts into flames and another SUV drives off a bridge off screen and a man falls over the bridge in close-up (we later see he is unharmed). Two chase scenes feature SUVs chasing a woman and a boy in a truck at night.
► Two men struggle in a warehouse, and one man transforms into the Ghost Rider with a huge skull of flames: while flaming, he jumps on his flaming motorcycle and chases a convoy of SUVs chasing a woman and a boy, the woman's car is forced off the road and into the wall of an abandoned industrial building, the men chasing them leave their vehicles and beat the woman and the boy (we see a scratch on the boy's face and a drop of blood falling to the ground), the Ghost Rider beats several men using flaming bike chains, he laughs maniacally and crushes the skull of one man as the man screams; SUVs erupt in flames, other men fire automatic weapons at the Ghost Rider, a large caliber gun shot throws the Ghost Rider into an SUV that bursts into flames and the camera cuts to a man in a hospital with red bruises on his abdomen (he gets up and leaves).
► The devil attempts to send his spirit, a black cloud, into a young boy but fails (we see the black cloud disappear in the air). An elderly man puts a curse on a boy over a cell phone, and the boy screams and collapses, but awakens unharmed; the boy runs away, but breaks his ankle (he screams and the ankle heals itself quickly). A woman pushes away a man that tries to kiss her and shoots him; he falls back, presumably dead (no blood is seen).
► A man takes another man into a wine cellar to exorcise the Ghost Rider: the first man gives the second man bread to eat, the second man walks out and is trapped in a stone dome, where he goes through withdrawal convulsions, spews black smoke and chains, spins in the air and drops to the floor; he wakes up on the floor, saying he is cured.
► A flashback shows a man crunch a bottle in his hand to draw blood and sign a contract with the devil in blood. Three times, we see flashbacks of wars with shooting and bombings, all attributed to the devil.
► A showdown in a warehouse shows the Ghost Rider commandeering a huge construction machine that lights up with flames; the Ghost Rider smashes men and SUVs and whips other men with flaming bike chains while laughing maniacally and roaring, as men shoot him without effect (he is also unharmed by an exploding grenade).
► A woman lies dying in a cave at night, we hear a man's voice ask if she wants to make a deal and she nods; the screen blacks out and we hear that she had sex with the devil and bore his son.
► A man tells a woman that he is possessed by the Ghost Rider, who comes out in fire to give people what they have coming to them. We hear that the Ghost Rider is an angel captured by the devil, driven insane and now seeks revenge on evil. A man tells a boy that urinating while on fire is like using a flamethrower and is fun.

SUBSTANCE USE - A man on a hospital gurney asks for Morphine and Valium, a man steals several bottles of medication from hospital medical cabinets (we can't see the labels), and a man opens unmarked medicine vials and pours 5 or 6 pills into his mouth and swallows. A man drinks alcohol from a small flask several times and from three dusty wine bottles, a man drinks wine from a dusty wine bottles, and a monastery wine cellar contains hundreds of dusty wine bottles in alcoves. A man lights a cigarette, it goes out and he drops it.

MESSAGE - Evil powers can be captured and used for good. 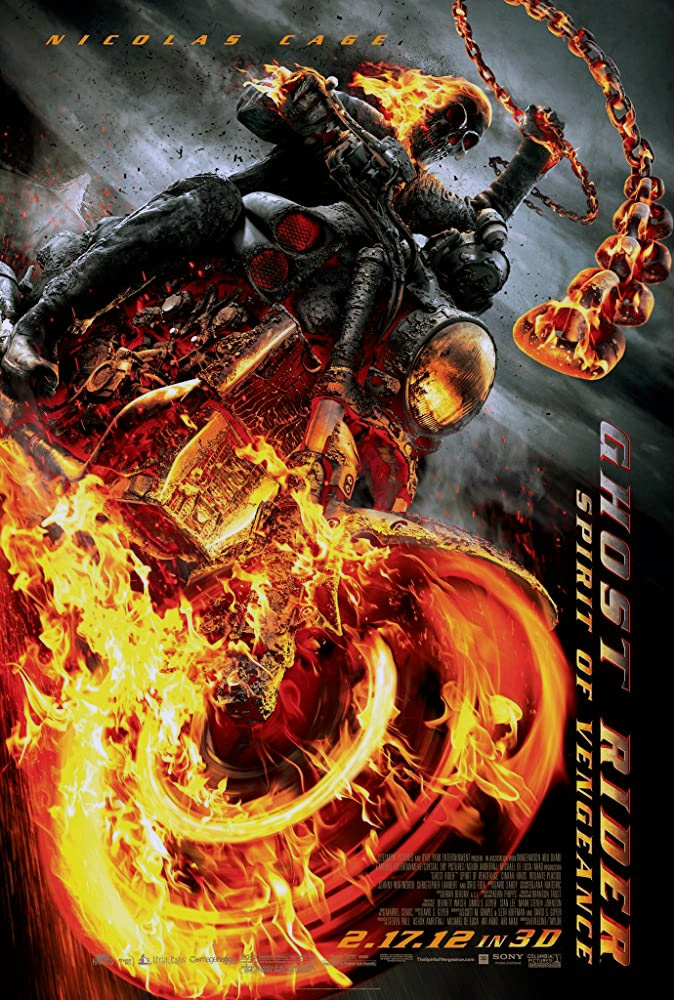