When a complex system of satellites that control extreme weather goes haywire, the scientist (Gerard Butler) who created the system is called into action to track down the cause before the planet is destroyed by extreme storms. Also with Jim Sturgess, Abbie Cornish, Alexandra Maria Lara, Daniel Wu, Eugenio Derbez, Amr Waked, Adepero Oduye, Andy Garcia and Ed Harris. Directed by Dean Devlin. [1:49]

SEX/NUDITY 1 - We see a few men in a locker room with towels wrapped around their waist; bare chests, abdomens and backs are seen. A woman wears a low-cut top that reveals cleavage.
► A man and a woman in bed kiss (she is shown wearing a low-cut, short nightgown that reveals cleavage and bare shoulders) and they are interrupted by a phone call. A man and a woman hug in a few scenes.
► A woman tells a man, "She's hot," about his girlfriend. A woman tells a man, "You're not supposed to be sleeping together," about him and his girlfriend (they both work for the government).

VIOLENCE/GORE 6 - Huge storms blow through major cities: enormous chunks of ice fall from the sky and strike vehicles and buildings in a city as people run screaming, a giant wave rolls through the ocean and then freezes and moves across a beachfront freezing anything in its path (we see people frozen as they run), cars swerve on icy roads, a jetliner falls from the sky and crashes to the ground, and many frozen birds fall from the sky; an arena is struck by lightning and it explodes sending glass and debris through the air, a bridge crumbles and throws cars off, a crane topples crushing vehicles on the ground, a giant wave rolls over a sand hill in a desert and a man on a camel tries to run away but is enveloped, and other waves crash through cities toppling buildings and washing people away; giant tornadoes swirl through cities throwing rubble, we see a young boy separated from his dog during a storm (they are reunited), buildings burst into flames, and a space shuttle explodes on the launch pad.
► A road heaves and cracks as red hot gas main pipes push through it from underneath and flames burst through the openings; cars speed to avoid the openings created and we see several fall through, and tall buildings collapse like dominoes as people run and scream.
► A man in a space station is locked in a passage way, the walls of the passage blow out and the man is sucked into space (we see his face turn gray as he screams). A man is pushed in front of a moving car: he is struck and thrown into the windshield (we see him lying with his leg twisted under him on the road with blood on his head and face) and we see him die. A mechanical arm holding a satellite spins out of control nearly crushing several people and causing destruction to the satellite and the surrounding area (no one is harmed). A man using a space suit floats in space and recovers a panel from a satellite; his propulsive backpack system malfunctions and sends him in different directions crashing into and damaging machinery outside a space station (he catches onto a cable before sailing into space and he is not injured). A man and a woman move through a structure in space and cling to a satellite as explosions throw them around. A space station begins to self-destruct and parts of it explode causing people onboard to be thrown; the people scramble to board shuttles to leave the station. A space station explodes and we see debris move through space.
► Armed UN forces walk into a patch of desert that is completely frozen and we see people frozen mid-stride; one man touches the hand of a frozen person and the hand breaks off (we see frozen flesh (there's no blood flow). Men with flashlights move through an office and examine a computer.
► A man shoots an RPG at a car approaching and it explodes (presumably killing the occupants). A car chases another car through streets as lightning strike the ground and breaks up the roadway as well as structures that fall in their path; the passengers in the cars exchange gunfire and the driver of one car is struck and killed (we see him flinch from the shots while no blood is seen); one car shoves the other car off a ridge and it rolls, lands on its roof and explodes (we see the man inside struggling to get out as it bursts into flames).
► A man punches another man in the face twice; the struck man pulls a gun and threatens the attacker and they fight with more punches landing; the gunman shoots the gun and breaks a glass panel that bursts and sucks him into space. A woman with a gun shoots in the air in a crowded area causing people to run and scream. A woman holds a gun to a man's head and police officers arrest him. A woman holds a gun on a man and leads him to a waiting car that they use to speed away. A woman enters her apartment and hears breaking glass, she draws her gun and moves through the area until she finds a woman and holds the gun on her (she puts it down and no one is harmed). A man with a gun questions a man and a woman and then puts the gun away. A man punches another man in the face knocking him back onto the ground. A woman with headphones on and using a computer jumps when a man touches her shoulder.
► A man argues with a government official while being questioned about a satellite system and a space station and we hear that the man punched another man in the face. A man and a woman argue in a few scenes. Two men talk about their parents having died. Two men argue in a few scenes.
► A voice over describes rising temperatures on Earth and melting ice caps, hurricanes, tornadoes and droughts as we see images depicting the destruction of these events; we hear that a heat wave killed 2 million people in a day. We hear that 300 people died due to a malfunction of a weather control system.

SUBSTANCE USE - A man drinks a beer and offers one to another man who declines.

MESSAGE - We all share one future and one planet with one climate; we should not destroy it. 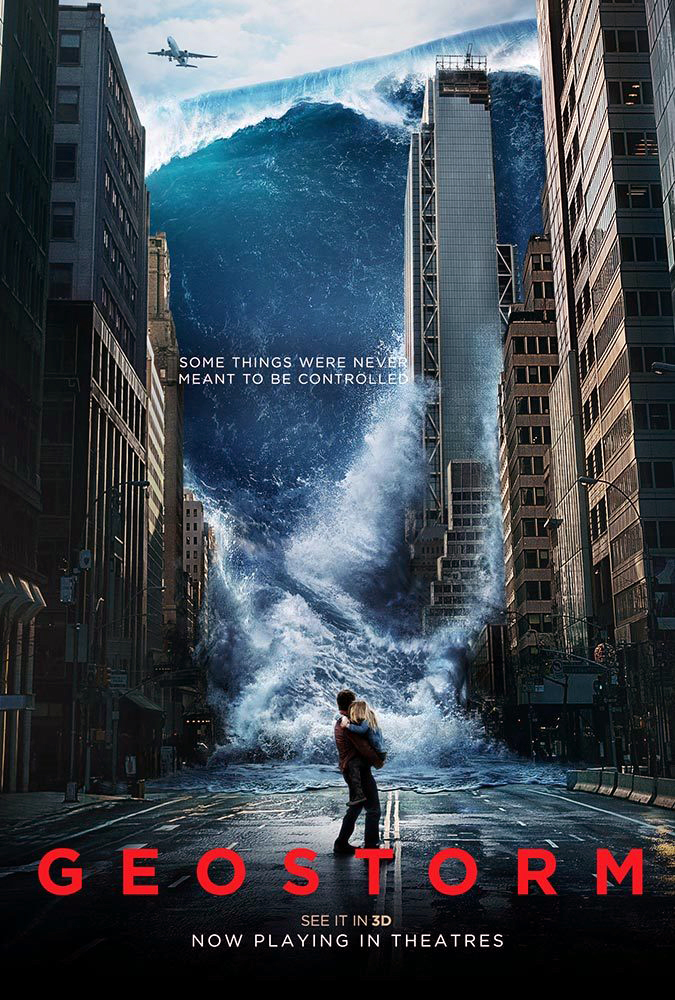