Bill Murray provides the voice to the wise-cracking, fat and happy animated cat: When Garfield's beleaguered owner Jon (Breckin Meyer) adopts a dog, Odie, Garfield is jealous and does whatever he can to get rid of him. However, when a TV personality steals Odie in order to make him do tricks on camera, Garfield summons his courage and several animal friends and manages to reunite his now expanded family. Also with Jennifer Love Hewitt, Liz Wilson and Stephen Tobolowsky. Directed by Peter Hewitt. [1:25]

VIOLENCE/GORE 2 - A man chases a dog and cat, the man threatens the dog with a shock collar, the cat jumps on the man, the man tosses him and puts the collar on the dog. A man is surrounded by many dogs that snarl and snap at him, a swarm of rats also surrounds him, and the man is attacked (we see this in silhouette); eventually we see the man with a shock collar on his neck, he is zapped a few times (we see an electric current glow) and fall to the ground (no blood or injuries are evident). A dog is shocked with a shock collar, being forced to do tricks. A dog chases a moped, then a car, then a truck through busy streets and he ends up getting lost. A cat and a mouse run across a busy street and are nearly hit by cars, and are nearly trampled by people crossing the street. A man punches a man in the face and he falls to the floor. A cat re-directs trains and there are several near collisions. A cat is caught in a net by animal control and taken to the pound. A cat climbs through an air shaft, he is blown through the shaft bouncing off the walls, he slams into a wall (we see his imprint in the metal wall) and eventually crashes through a vent and lands on the floor. A cat is surrounded by many rats in an alley and they talk about eating him. A cat chases and jumps onto the back of a moving truck, the truck slams on its brakes and the cat slams into the back windshield. A dog snarls and barks at another dog. A dog chases a cat and tries to lunge at him in a few scenes. A cat throws something that knocks something down that knocks something else down, etc, etc, until a bookcase tips over nearly crushing the cat. A cat is pulled up in the air in a bucket, the rope breaks free and the cat crashes to the ground (he appears uninjured). A cat falls from a roof onto the ground after being hoisted into the air in a bucket. Many dogs chase a cat through a dog show causing a lot of property damage and knocking people down, the cat runs up a woman's dress, the woman runs while being chased by the dogs, and she runs into people knocking them down. A man chases a mouse and swings a broom at it (he does not manage to catch it), he trips on a ball and falls on the floor. A cat surfs down a stair well on a food tray, runs into a floor cleaner, spins around, flies out a window and crashes through the roof of a truck. A cat has a mouse in his mouth (we see a tail sticking out of his mouth), then spits it out. A cat flushes the toilet while a man is in the shower (we hear the man scream and presume that the water has gotten very hot). A man spits food in the sink after eating cat food. A cat jumps on a man's stomach to wake him up. A cat runs into a door, a cat shoves a dog, a cat shoves a dog off a chair repeatedly, and a cat hits a dog with a pillow. A woman tells a man that a dog "won't make it if he has to live his life in a cage." A cat asks for shoe laces while in a cage at the pound. A cat burps several times. In an animated short entitled "Gone Nutty" a squirrel jumps across deep crevices, jams an acorn into a tightly packed collection that begins to swirl like a drain, he is sucked down though a tree, he is thrown over a cliff, he falls a great distance, slams into the ground, a flaming acorn barrels down and crashes into his head, and the ground breaks apart creating the continents and leaving him on a tiny bit of ice in the middle of the sea.

MESSAGE - There's always room for one more in a loving family. 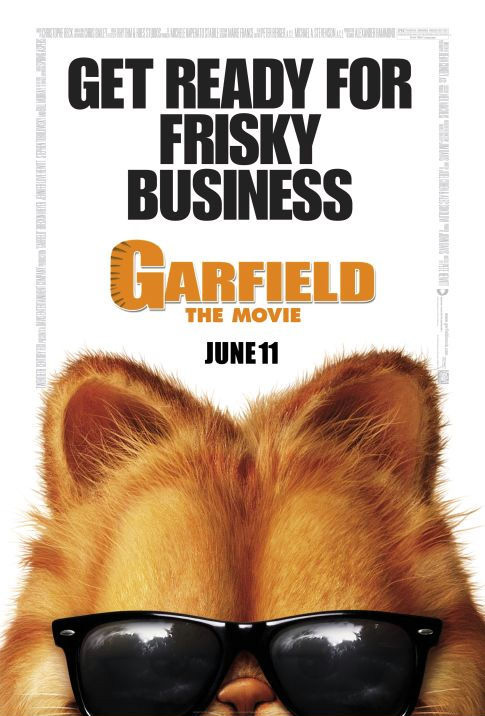