SEX/NUDITY 7 - A man takes down his pants exposing his bare behind, slaps himself and wiggles, taunting his son who has just yelled profanities at him. In two scenes a young woman is whacked on the shins with a cane until she reaches orgasm. A young man rubs against another man's crotch. A young woman begins to take a man's pants off in order to perform oral sex (it happens a couple of times); once he acquiesces, and another time he refuses. A woman blows in a man's ear and he groans and writhes a bit. A man and woman are seen in bed; the woman is in a negligee which exposes some cleavage. We very briefly see a man's pierced nipple. A man thrusts about as a demonstration. We see a horse's sexual organ a couple of times and an elephant's once: A young man grabs both, in separate scenes, and manipulates them (the elephant sprays a man with semen). We see a horse mounting another horse and thrusting. A young man holds a salami between his legs while saying, "ding-dong." A young man tells his mother that she needs to satisfy her sexual desires. A man tries to be seductive by licking his lips provocatively. A young woman does a sexual hand gesture. A young man accuses his father of molesting his younger brother. A young man sucks milk directly from a cow's utters.

VIOLENCE/GORE 8 - A pregnant woman goes into labor and a young man delivers the baby; the woman screams feverishly, the baby is delivered when the young man pulls on it; he falls back holding the baby, while the baby is still attached to the umbilical cord which is attached to the mother. The young man bites the umbilical cord and swings the baby around by the end of the umbilical cord still attached to the baby, spraying everyone and everything with blood until the baby begins to cry. A young man falls from his skateboard and screams in agony when he breaks his leg; we see his torn pants and a very bloody, exposed bone; a young man proceeds to lick the wound. A woman on TV is stabbed (the image is in black-and-white and fuzzy), she screams and there's blood on the wall behind her. A dead deer is shown lying on the side of a road. A man takes a knife and opens the deer's abdomen from which bloody intestines pour out onto the road. We then see the man wearing the deer's bloody carcass while dancing around, and he is promptly hit by a semi-truck which sends him skidding along the road. A young man in a hospital bed with a cast on his leg screams in pain when his friend shakes and pulls on his leg. In a couple of scenes a man whacks a woman's shins repeatedly with a bamboo cane -- at her request. A young woman is hit in the face with a bamboo cane and she screams. A young man puts a gun in his mouth and there's a conversation about blowing his brains out. A boy is repeatedly injured by running into the side of a car (leaving a bloody head and face), being beaned in the mouth with a baseball (leaving a very bloody mouth and a handful of teeth), being hit in the head with a drinking glass, and running onto an airport tarmac and into a plane's propeller (this happens offscreen, but a crowd of people is sprayed with blood). A man slams a young man against a wall, holds him by the neck and kicks a hole in the cast on his leg. A man kicks open a bathroom door and throws a young man through a glass shower door. A young man accuses his father of molesting his younger brother. A man spanks his grown son in a restaurant. There is a scene where the police fire a warning shot in the air to stop a quarrel. A man is knocked out when he's shot in the neck with a dart. A young man throws a bust through a window and then jumps out himself. A young man has strings that hang from the ceiling tied to his fingers and his father yanks down hard on them causing him to leap up in pain. A young man drives a truck, with part of a house on the flatbed, through a tent village causing a lot of damage and throwing a man from the window of the house. The house then falls onto the young man. A man throws a young woman into some barrels and a young man into some shelves. A young man is kicked in the head by an elephant and thrown down. A young man recklessly rides his skateboard through a shopping mall while being chased by yelling security guards and eventually slams into a door where we see his nose bent against the glass. During the commotion an elderly man using a walker is knocked to the ground. There's a brief food fight. There's lots and lots of yelling. A soap on a rope falls into a toilet and a young man sticks his head in to try to retrieve it. A man tears up his son's sketches while insulting him. A young man plays with the fish on his plate by poking it with his fork and making it swim and talk. A man drives his pick-up truck through a skateboard ramp breaking it into splinters. In a cartoon piece the jaw of a centaur (he's half zebra, half human) is torn off and he lays on the ground bleeding; then he's tied to the bumper of a car and dragged around while his exposed upper jaw is dragged on the pavement -- and while the exposed teeth are being filed on the cement. There are a couple of scenes containing discussions and crude insults about hating the handicapped. A young man runs screaming into a building and kicks open an office door. A young man has an umbilical cord taped to his stomach, and a young man with meat strapped to his head and sausages dangling from strings.

MESSAGE - Learn from your mistakes. You'll never know if you can do something unless you try. Do things your own way. 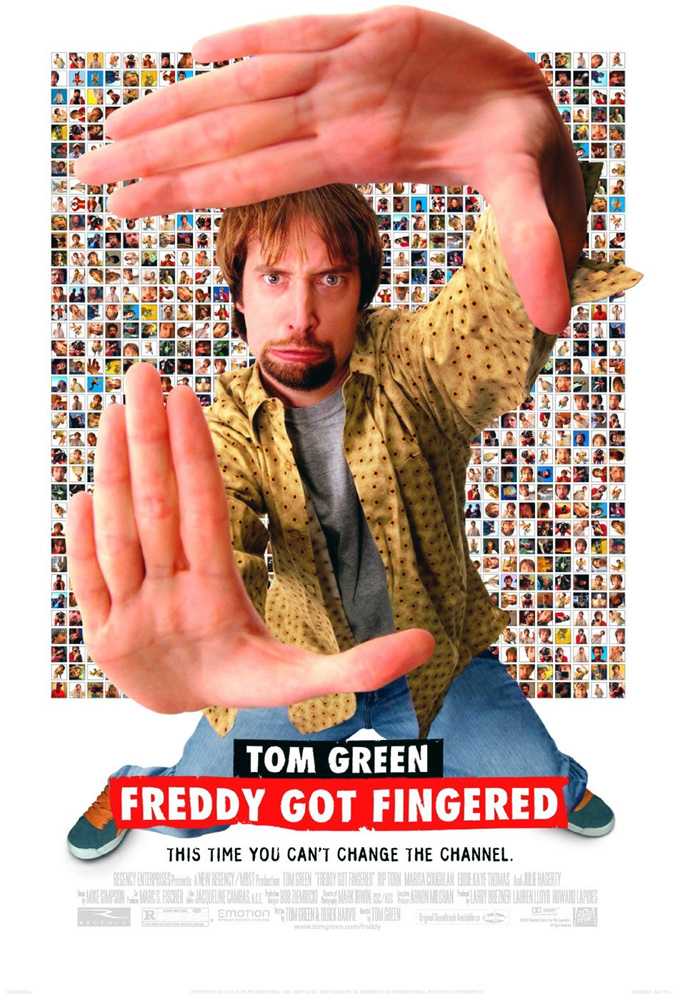