Why is “Freaky” rated R? The MPAA rating has been assigned for “strong bloody horror violence, sexual content, and language throughout.” The Kids-In-Mind.com evaluation includes an interrupted sex scene, a sexual threat between three teen boys and a teen girl, a few kissing scenes between teen boys and girls as well as two teen boys and a teen boy and a man; many scenes of murder with an assortment of weapons including saws, wooden spikes, daggers, bottles, a sickle and a gun with a lot of blood and gore revealed, and nearly 40 F-words and other strong language. Read our parents’ guide below for details on sexual content, violence & strong language. After a teen girl (Kathryn Newton) is attacked by a serial killer (Vince Vaughn), she and the killer magically change bodies and proceed to wreak havoc on a town and with each other’s lives. Also with Alan Ruck, Katie Finneran, Mitchell Hoog, Uriah Shelton, Misha Osherovich, Melissa Collazo and Kelly Lamor Wilson. Directed by Christopher Landon. [Running Time: 1:41]

– A teen boy thrusts into a teen girl while she leans over a car and she pushes him away telling him that he is taking too long and makes a crude anatomical reference (“It’s a vagina not an all-night drive through”), and the boy asks for her to manually stimulate him instead.
► Drawings on bathroom stall walls show several line drawings of penises and one with a girl’s face implying oral sex and a crude name for the act. Nude statues are seen in a house and bare breasts, abdomens, genital areas (without detail) and legs are shown. A teen girl wears a low-cut tank top that reveals cleavage. Teenage cheerleaders wear short skirts that reveal their bare legs to the upper thighs. A man showers in a locker room shower and we see his bare back and upper chest. While urinating in a stall, a man moves his hips side-to-side making a slapping sound (we do not see nudity). Drawings on bathroom stall walls show a line drawing of a person with a red anus and the words, “My anus is bleeding.”
► A teen boy and a teen girl kiss passionately. A teen boy takes another teen boy to a room and he kisses him (please see the Violence/Gore category for more details), and then threatens him if he tells anyone. A teen boy and a teen girl kiss. Three teen boys surround a teen girl and one boy talks to the girl about having sex with all three of the boys (please see the Violence/Gore category for more details). A teen boy kisses a man (it’s actually a teen girl in a man’s body) in the back seat of a car. A teen boy cuts his finger and a teen girl puts his finger in her mouth to lick the blood off as her teacher reprimands her for flirting.
► A teen girl looks at a teen boy with interest. A teen girl wakes up the morning after an attack and she looks in the mirror as if she doesn’t recognize herself; she then squeezes her clothed breasts. A teen girl touches another teen girl’s hair and the other girl asks, “Oh, are you…? It’s OK if you are,” and she does not reply. A teen boy touches a teen girl’s clothed buttock and makes a sexual remark (please see the Violence/Gore category for more details). A teen girl wakes up, kisses her fingers and presses them to the lips of a young man pictured on a poster next to her bed.
► Teens talk about crushes. A woman asks a man to have coffee with her, not knowing that the man is actually her daughter in the man’s body. A man (actually a teen girl in a man’s body) recites a love poem to a teen boy. A woman returns home and quizzes her teen son about a teen girl tied in a chair in the dining room; the boy says they are “role-playing,” the woman asks, “Isn’t role-playing a sexual game?” and the boy says yes and confesses to being straight, and his mother says, “You are not straight.” A teen boy makes a crude remark about a teen girl being dressed as a beaver (their school mascot costume). A teen boy talks about a rumor that a teen girl got a carrot stuck in her genitals. A man offers another man sex in exchange for drugs. Teen boys ogle a teen girl as she walks through a hallway. A teen girl asks another teen girl if a man molested her when he attacked her. A teen girl texts others that another teen girl is gay, and she writes that she is a “lesbian” and “vagitarian.” A teen boy asks a man about his size while the man is urinating and a teen girl reprimands him. A teen boy talks about going to a high school dance to wait for the drunken boys to realize that they are gay.

– Serial killers are hard to kill no matter what they look like. 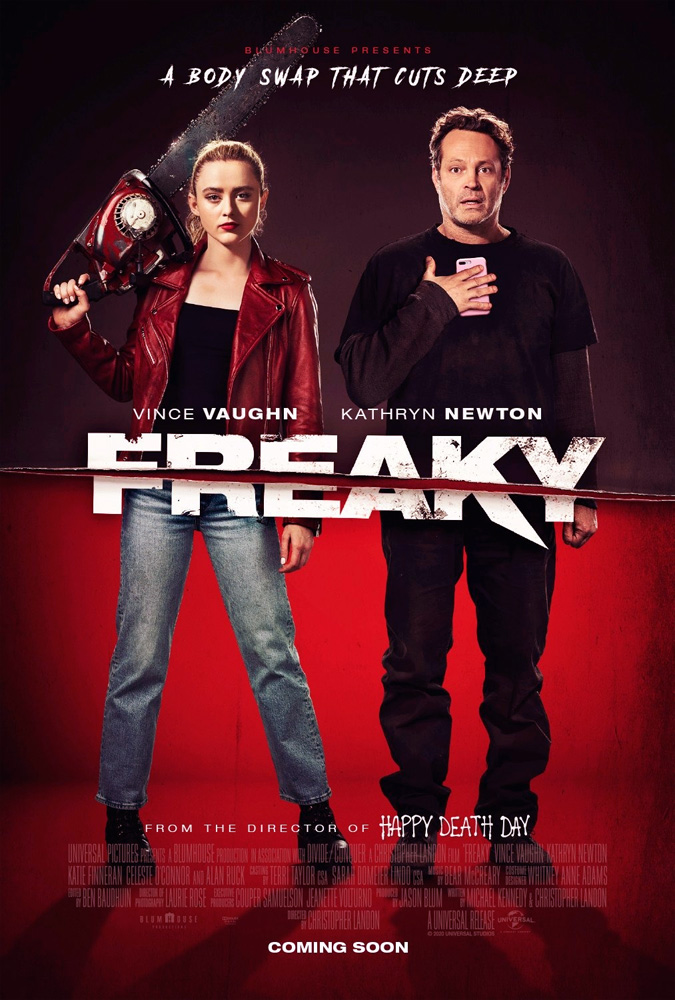