Four adopted brothers (Mark Wahlberg, Tyrese Gibson, André Benjamin and Garrett Hedlund) meet at their childhood home after their mother's funeral. She was murdered during a convenience store robbery, and when it becomes obvious that the police are not trying very hard to solve the case and bring in the killers, the brothers decide to go looking for them on their own. Also with Sofía Vergara. Directed by John Singleton. [1:49]

SEX/NUDITY 6 - A woman sits on a washing machine with her legs spread apart, she sets it on spin and invites a man to have sex with her; we see him thrusting and she is moaning (they are then interrupted).
► A young man steps out of a shower and we see his bare back and buttocks, a man is bare-chested in his boxer shorts, and a man sits on a toilet with his pants around his ankles. Women wear low-cut tops and dresses that reveal cleavage in several scenes.
► A man and a woman run along a street; the man is in his boxer shorts and the woman in a bra and it is implied that they have had sex. A man and a woman kiss in a few scenes.
► A man and a woman go upstairs together and it is implied that they are going to have sex. A man tells another man that he is going to have to "share his woman." A man makes suggestive remarks about a woman.

VIOLENCE/GORE 7 - We see a surveillance tape of a woman being shot by two gunmen who are robbing a convenience store; the woman is shot twice and we see her lying on the floor.
► Two men with guns hold up a convenience store, they shoot the cashier (we see him hit by bullets and knocked back), and they shoot a customer off screen (we see the flash of the shots and hear the bangs).
► Several men shoot at men in a house with automatic weapons, parts of the house are splintered, and the men in the house shoot back; then, one man is stabbed in the chest (blood spurts), and one man is hit in the face with a rock and then beaten in the head repeatedly.
► A man is shot in the arm and then in the legs as he runs away (we see a lot of blood on his clothing and the snow beneath him), he spits blood, gasps for breath and he dies.
► A man climbs out a window and goes down the side of the building while shooting up at two men, who cut his rope and he falls to the ground (we see the man's badly broken leg with a bone sticking out of a bloody wound).
► Men chase each other in cars on snow-covered roads, they shoot back and forth at each other (one driver is shot in the arm), and they ram into each other: one car flips and slides along the roadway, two men get out of the car, and other men punch and kick them and then shoot them repeatedly.
► A man holds a gun on a man who gets the gun away and holds it on the first man; then they go outside a house where many armed police officers hold guns on both men -- the man with the gun shoots at the police, they shoot back and he is hit in the leg and chest (blood spurts).
► A man hits a man in the leg with a pool cue and he drops to the floor; he then follows him outside and shoots him three times in the chest (we see blood on the man's shirt).
► Two men fight with many punches, one falls to the ground and is held around the throat, one is head-butted and punched in the kidneys, and he falls to the ground motionless; he is then thrown into a hole through an ice-covered lake. Several men with guns barge into a party, they yell and shove people, and a couple of men punch other men in the face. A man punches a man in the face, he falls to the floor, and he gets up, shoves one man and punches another man.
► Two dogs attack a man, they bite his leg and arm, and he yells (we see blood on his pant leg). A man wraps a plastic bag around a man's head and holds it closed; the man falls to the floor and struggles to get the bag off (he does eventually). Police officers punch three men in the head and face while interrogating them (they all have bloody mouths). A man is pulled out of his car, thrown back onto snow, his shirt is pulled up and his stomach is slapped (it leaves a red welt). A man smacks a man on the head, they fight and wrestle, and one is pinned on the floor.
► A man douses a car with gasoline and threatens to light it while a man is inside. A man and a woman run while another man in a car chases them and shoots at them. A man forces a man and a woman to get on their hands and knees and eat food off the floor. A man pulls on a man's necktie and the man coughs.
► Several men play street ice hockey: they knock each other down on the ice, and they slam each other into fences and walls. A woman bandages a man's arm after he has been shot, and he flinches. A man locks a woman in a porch, she yells and pounds on a door.
► A man urinates (we hear trickle). 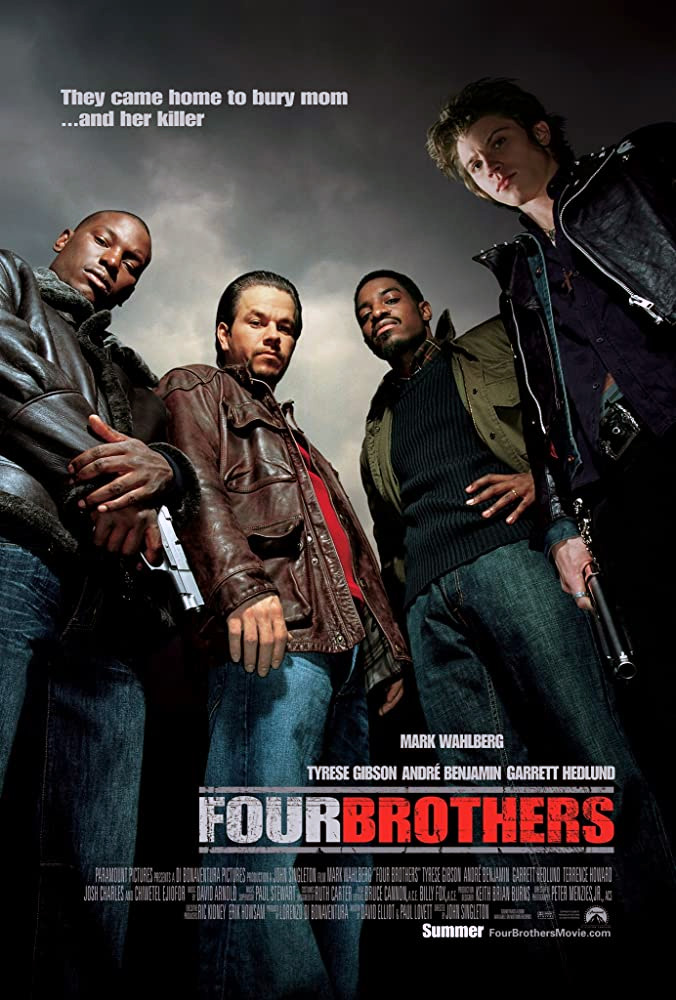