Why is “Four Kids and It” rated PG? The MPAA rating has been assigned for “thematic elements, some rude/suggestive comments, fantasy violence and language.” The Kids-In-Mind.com evaluation includes a few kissing and near kissing scenes, and a few cleavage revealing outfits, the implied death of a man caught in a house as it collapses, several dangerous activities undertaken by children including climbing sheer rock walls, flying, riding in helicopters, confronting adults that want to harm them, many arguments and discussions of the separation of families and blending families, and some mild language and name-calling. Read our parents’ guide below for details on sexual content, violence & strong language. A man (Matthew Goode) and a woman (Paula Patton) are single parents that bring their two families together for a holiday in a seaside retreat, hoping that they will begin to build a new, blended family together. That’s when the children encounter a magical creature that grants wishes. Also with Teddie-Rose Malleson-Allen, Ashley Aufderheide, Billy Jenkins, Ellie-Mae Siame, Russell Brand and the voice of Michael Caine. Directed by Andy De Emmony. [Running Time: 1:50]

Four Kids and It SEX/NUDITY 1

– A man and a woman lie on the ground together and he caresses her clothed hip as she moves to kiss him (they are interrupted). A man and woman put on tribal masks and pretend to kiss each other before they are interrupted. A man and woman introduce each other to their children and say that they have been seeing each other; the children become upset. A husband and his wife kiss awkwardly on the cheek in a video. A man and a woman lie down on a kitchen floor behind a cabinet and we hear her giggling; we later see them snuggling on the floor and they are interrupted by their children.
► Two teen girls talk about boys and one gives the other advice on how to get boys to pay attention to her; she tells her to hit them in the arm. A young girl talks about her father leaving her mother for a younger woman with a “tight, 20 year old tushy.” A woman says a man was “hitting on me.”
► A woman wears low-cut T-shirts and dresses that reveal cleavage in a few scenes. A creature has a mostly fur-covered body with drooping pectorals and we see buttocks cleavage a few times when it turns its back to us. A security detail wears tight-fitting outfits that reveal cleavage and the outline of hips, legs and buttocks.

Four Kids and It VIOLENCE/GORE 3


Four Kids and It LANGUAGE 1

Four Kids and It SUBSTANCE USE

– A young girl opens a hatch in a helicopter and we see small bottles of liquor and when the girl reaches for them a teen girl tells her no, and a man and a woman drink glasses of wine.

Four Kids and It DISCUSSION TOPICS

Four Kids and It MESSAGE

– What you want isn’t always the way life should be. 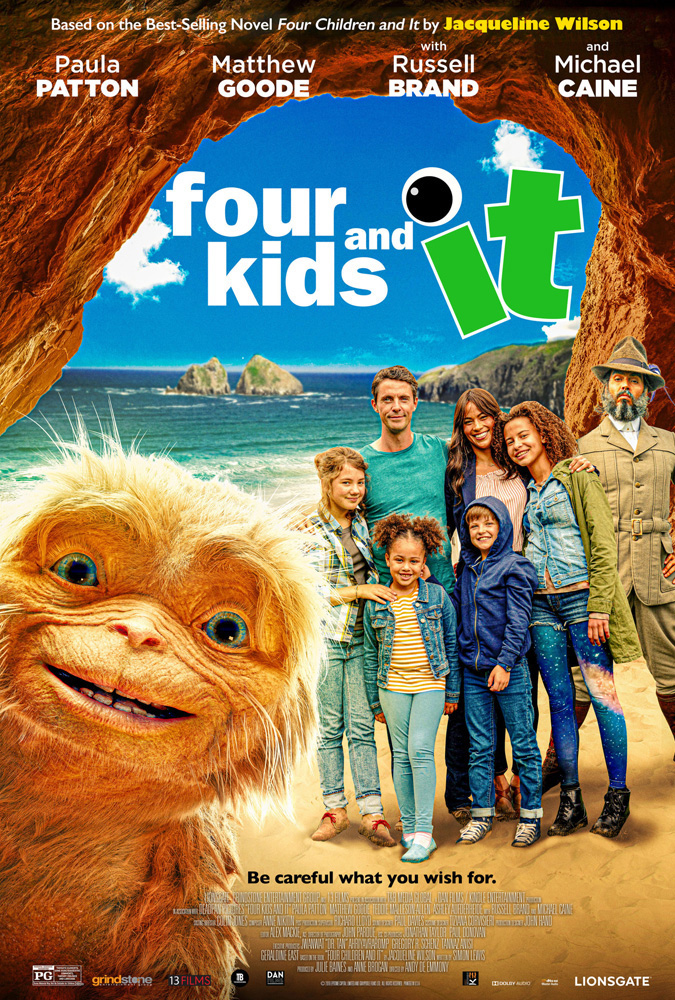