Why is “Five Feet Apart” rated PG-13? The MPAA rating has been assigned for “thematic elements, language and suggestive material.” The Kids-In-Mind.com evaluation includes a couple of kissing and near kissing scenes, conversations about relationships and sex, cleavage revealing outfits, discussions of a death during a cliff-diving accident, a near fatal fall into ice, many hospital scenes with CF treatment and surgical procedures, several scenes of prescription drug use, and at least 1 F-word. Read our parents’ guide below for details on sexual content, violence & strong language.”

A seventeen-year-old (Haley Lu Richardson) spends much of her life in the hospital as a cystic fibrosis patient, living by the routines of extensive treatments and self-restraint. When she meets another teen (Cole Sprouse) with the disease, they begin to fall in love, but are forced to always stay five feet apart since they could infect each other with their own distinct viruses. The teens struggle with the realization that they will never be able to touch each other. Also with Moises Arias, Kimberly Hebert Gregory, Parminder Nagra and Claire Forlani. Directed by Justin Baldoni. [Running Time: 2:00]

– A teen girl and a teen boy undress in front of each other, alone at a swimming pool, but do not touch as they show each other their scars from treatment of cystic fibrosis (please see the Violence/Gore category for more details); they stand in their underwear (she is wearing a bra and underwear and he is wearing briefs) that reveal cleavage, abdomens and thighs. A clothed teen boy and teen girl nearly kiss, but do not.
► A teen girl wears tank tops and V-neck tops that reveal cleavage and bare shoulders and arms a few times. A teen girl is shown in a bathroom from the waist up wearing a bra that reveals cleavage, bare shoulders and abdomen. A teen girl holds a small bikini top up for friends to see and laughs.
► Unable to touch each other for health reasons, a teen boy and a teen girl hold opposite ends of a five-foot pool cue as they take walks; in one scene, the boy says he wants to touch the girl but cannot and she takes her end of the cue and runs it along her collar bone and upper breast as he stares at her. A teen boy gives a teen girl CPR, alternating between mouth-to-mouth breathing and chest compressions and kissing her for several seconds, three times altogether (please see the Violence/Gore category for more details). In a hospital room a clothed woman sits in the lap of a clothed man sitting in the bed, and both talking to a teen boy patient standing beside them.
► A teen girl with CF wears latex gloves for infection control and tells a teen boy that latex is used for protection, while winking (a condom reference is implied). A teen girl tells a male friend with CF that they can never kiss or touch each other. A teen boy tells a teen girl that his boyfriend and he broke up, but “screw him”; she replies, “At least you got to do that” (he does a double take and chokes for a few seconds). A young man tells a young woman that her organizing of a medical cart is like foreplay for her and she walks away. A teen girl tells a teen boy that lending his room to a couple to have sex is disgusting, but sex itself is fine. A teen girl tells a teen boy that she has never had sex and he says she is sexy. A young man asks a male friend, “Have you two…” (implying sex) and the friend says that no, he likes boys. A woman is shown with a large abdomen and we hear that she is pregnant; we later hear that she delivered the baby.

- Two teenagers in a hospital have medicine carts that include shelves loaded with many pill bottles as well as bottles of liquid medicines and boxes of other types of medicines and nutritional liquids, a teen girl organizes two medicine carts, a teen girl swallows a dozen pills and capsules with pudding and two tablets with a beverage, a teen girl spills an entire large bottle of capsules and they scatter on a floor, two teen patients breathe inhalation medicines through large nebulizers in a few scenes, and a teen girl posts on a Vlog that she needs a few rounds of antibiotics for a cough and a 102-degree fever. Several teens and twenty-something men and women drink toasts with glasses of champagne, and we see a close-up of champagne being poured into a glass.

- A diagnosis of cystic fibrosis does not preclude living a full life. 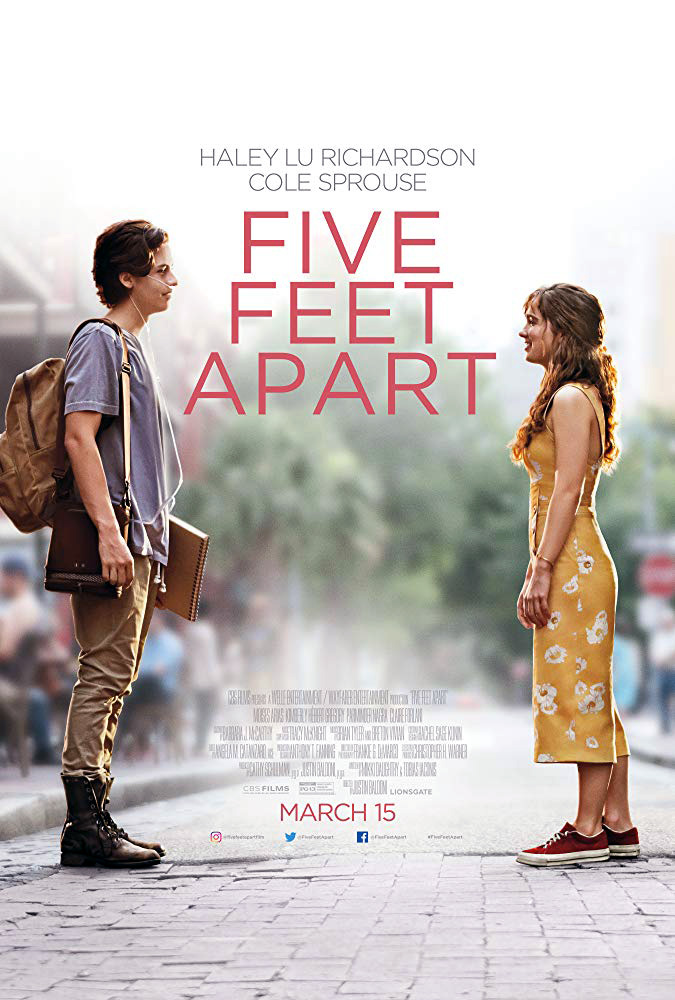