The creators of "Toy Story," "A Bug's Life" and "Monsters, Inc." go underwater in this adventure, which takes place in Australia's Great Barrier Reef and a Sydney dentist's aquarium. After a diver scoops up Nemo, a young clown fish, his distraught father Marlin, accompanied by his friend Dory who has short-term memory problems, sets out on an epic journey to find him. Meanwhile, with help from his fish tank mates, Nemo makes his own plans for escape. With the voices of Alexander Gould, Albert Brooks, Ellen DeGeneres, Erica Beck and Geoffrey Rush. Directed by Andrew Stanton. [1:41]

VIOLENCE/GORE 3 - A barracuda with very long and pointed teeth snaps viciously at two fish, one fish is knocked unconscious, and the other fish along with many eggs are gone when he comes around (the barracuda apparently ate them although we do not see it). A fish is hit in the nose, her nose bleeds, a shark gets a whiff of the blood and goes into a frenzy chasing two fish through a wrecked submarine, crashing into doors, lunging through hatches, breaking through the hull and trying to squeeze into a torpedo tube; the two fish push a torpedo into his mouth, he spits it out, and it floats toward an underwater mine field setting it off. Two fish swim into very deep and very dark water, they see a light and begin to follow it, but it turns out to be a deep-water lantern fish with very sharp teeth, and it chases them and snaps at them (one fish ends up in its stomach, along with its lighted lantern, briefly). Two fish are surrounded by jelly fish (one is stung a couple of times), they bounce off the tops and try to get out but one is trapped; the other returns to save it and they both fall unconscious after being stung several times (one has scars on its side). There are tense moments when a young fish goes into an aquarium filter to clog it with a pebble and is sucked back into the filter tube toward a fan -- it is pulled out just before hitting it. A wrecked submarine slips off a reef and nearly pins two fish against a rock formation. Two fish are sucked into a humpback whale's mouth and one rams repeatedly at its "teeth" (actually baleen plates used to filter krill and plankton) trying to get out. Eventually, water rushes through, the two trapped fish cling to the whale's tongue, and they are shot out of its blowhole. A large fishing net scoops many fish into it, they scream and panic, but then they swim hard downward and the net breaks and the fish are freed -- one fish seems injured but it's fine. A father fish panics when his son swims into open water, a diver rises behind the young fish and scoops him into a net. The father fish chases in terror but is pushed away by a boat propeller. A girl screams when a pelican flies through a dentist's office and a fish jumps into her hair. A girl grabs a bag with a fish in it and shakes it violently. Two fish flop onto a table and one is flipped down a drain (we see him swirling through pipes). We see a photo of a girl holding a plastic bag with a dead fish in it and we hear that she "shook the bag too much." A man's mouth is drilled by a dentist (he yells and the drill whines). A dentist pulls a tooth out of a man's mouth when he is startled and the man yells. Two fish flap around on a pier surrounded by seagulls, and one is picked up and pulled on by the seagulls. A pelican scoops the two fish up and flies off, is chased by many seagulls, they swoop and fly and end up slamming into a boat's sails (their beaks poke through). A large shark smiles and laughs menacingly at two fish showing his many rows of pointed teeth, he escorts them to a meeting with two other sharks and the fish are frightened that they will be eaten. A frightened fish swims erratically in a tank and runs into the glass a few times, and a pelican flies into a window a few times. Two fish approach an eerie trench with fish bones in it. A pelican swallows two fish, but they fight back and he has to eject them. Two crabs snap at fish as it passes, a fish threatens a crab by holding it out of the water where seagulls can see it as a potential meal. Two fish twirl and spin through an underwater vortex. A young fish goes through initiation rites in an aquarium and swims through a fast-flowing stream of bubbles that they call "ring of fire." Fish and turtles swim through a fast moving underwater current. A fish swims through a large school of fish, runs into one and they fall to the sea floor. A boy turtle head-butts a fish, one fish smacks another fish in the face with its fin, and a group of baby turtles playfully tackle a fish. Two fish yell at each other in a couple of scenes, one fish tells another fish to go away and hurts its feelings. A puffer fish yells and puffs up a couple of times. A fish says "I have a hook in my lip," a fish asks "Am I dead?," a shark has a hook in his nostril, and a fish is scarred and we hear that he fell on dental tools. A fish gets stuck in a tube, two fish steal a crab's shell to tease it, and a baby fish bounces off a sponge and lands on the sea floor crying. A young squid inks when it is frightened. A father fish grieves over the loss of his family. A young fish tells his father that he hates him. A pelican sits on the ocean surface, a bubble pops next to it and another pelican thinks it's flatulence. An aquarium is filthy and the fish talks about what they are swimming in (their own waste). A fish burps. One fish is nicknamed "shark bait."

MESSAGE - Parents must know that eventually they must let their children go. A parent's love can help them do extraordinary things. Our shortcomings can sometimes become our strengths.

(Note: A short film precedes the feature and contains the following: A shapely doll in a bikini sunbathes, a shapely mermaid doll wears a bikini top and mermaid tail, and a snowman is anxious to get out of his snow globe to approach the dolls. A snowman tries to break his snow globe using various methods, including TNT and a blow torch.) 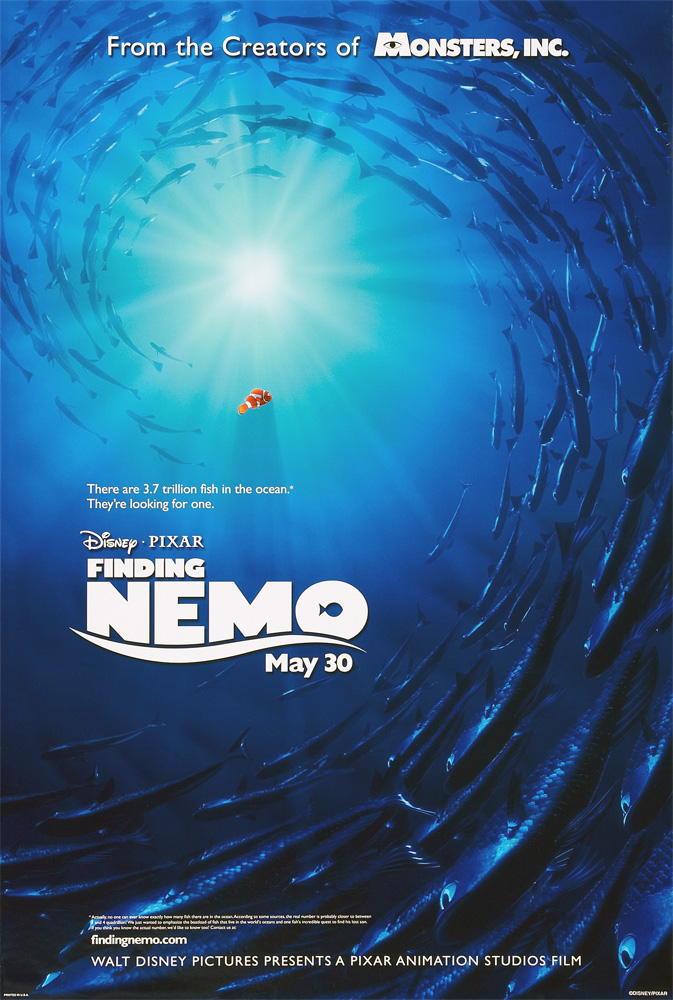