A series of mysterious deaths arouse the suspicion of a police detective (Stephen Dorff) and a health examiner (Natascha McElhone) and they begin to wonder whether the victims' cause of death had something to do with visits to a website called Feardotcom.com. Also with Udo Kier, Stephen Rea and Gesine Cukrowski. [1:38]

SEX/NUDITY 5 - A woman takes off her bra (we see her bare breasts) and climbs on top of a young man (he is videotaping her). We see more bare breasts, and a woman is strapped to a table (she is wearing her panties and a strap goes across her bare breasts). A dead woman is discovered in a bathtub and we see her bare breasts and there are a few autopsy scenes that show nude women lying on a table and we see their bare breasts. A man is shown lying on the bench of a booth in a bar and a woman crawls out from under the table and although nothing is said it could be construed that something sexual had been going on. A man and a woman kiss while being videotaped. A poster of an exotic dancer shows her bare legs in a cabaret costume. We see a photograph of a woman in a short skirt, her blouse exposing some cleavage and she is in a seductive pose. A man tries to flirt with a woman. A man and woman hug, and a man caresses a woman's hair. A woman wears tight-fitting clothing and we see some cleavage and a bit of her bare midriff, and a woman wears a full slip that exposes some cleavage.

VIOLENCE/GORE 8 - There are several scenes depicting people dying from fear induced by hallucinations: A man jumps onto railroad tracks to try to save a little girl that he sees standing on the other side; a train barrels down on him and we see him hit a wall, blood gushing from his mouth (we see him later with blood on his eyes, nose and mouth and a terrified expression frozen on his face). A swarm of large bugs crawl on a woman who screams and shakes, then they disappear, then they re-appear covering her again and this time they crawl out of her mouth as she screams. A woman walks toward an open window and we then see her body crash onto the roof of a car in the street below. Police officers go into a darkened apartment with their guns drawn and find a dead woman in a bathtub (her eyes, mouth and nose are stained with blood). We see a young man lying dead on a jail cell floor: his eyes, mouth and nose are covered with blood and the walls are painted with blood (the words are in German and are translated to read "murderer"). A man appears very agitated, he gets into his car, lights a cigarette, drops it on his lap, the car fills with smoke, begins moving on its own and speeds into a wall sending the man crashing through the windshield (we see him later in the morgue with a very bloody head and face). A man slumps down dead after seeing images of torture and seeing himself crumble to pieces and blowing in the wind. A man coughs and gasps and dies. A man is shot in the leg and blood spurts out, a man is shot in the chest and blood spurts out. A woman stabs a man in the back, and a man stabs a woman in the neck with a long needle. A man pokes a woman with needles (we see him approaching her and then hear her screaming). A woman goes into a dark theater alone and is attacked from behind by a man who places a handkerchief over her mouth; the woman struggles, kicks and screams for some time. A man draws a line across a woman's chest and then drags a scalpel across the line (no cutting). A woman is tied with her hands over her head and a man cuts off her clothing with a scalpel. There are several scenes that show images on a computer screen of a website that carries live scenes of torture and murder: there are repeated flashes of bloody human organs, an arm is severed, blood gushes from a woman's mouth, people are strapped onto tables, a woman's face is covered with plastic and she's gasping for air, women are screaming, people have bloody wounds and are in different stages of death. A woman wades into and then swims in murky water and finds a corpse; she drags the corpse out of the water and we see cuts on the face. A cadaver is pried opened in a morgue and organs sealed in bags are pulled out. We see a dead man hanging from a wall; his shirt and head are blood-soaked. A man watches a video tape of a woman being tortured. A photograph shows a woman's face being cut with a scalpel and blood drips from the wound. A plastic ball melts and turns black and a swarm of large bugs pour out of it. A man struggles against police officers as they arrest him and we see his mouth nose and eyes dripping blood. A man threatens another man with a gun while the other man holds a scalpel to the throat of a woman, holding her as a shield. There are several suspenseful scenes where people walk down darkened stairs, into elevators, and into darkened rooms while seemingly hearing or sensing that something is following them. A man hits a woman and we see her with a bloody nose. A man punches, a few times, someone on the other side of a video camera. There are a few morgue scenes showing dead bodies with autopsy scars across their chests and down their abdomens. A woman sees blood pouring from books and files on a desk. We see photographs of internal organs and the face of a dead woman, and we see police photos of a dead woman after having been tortured. A man is startled when a woman appears in an elevator and as he looks at her he sees images of her screaming and she has blood dripping from her nose. A man appears to be hit with a wave of energy from a computer and he falls back off his chair and lands hard on the floor, and a similar thing happens to a woman. We see a strange image in a videotape; it appears to be a blur of a ghostly face. We see a creepy homeless woman living in an abandoned steel mill and she appears to be watching television although she appears to be blind (her eyes are filmy). We see a man on a stretcher and his nose is bleeding. A woman puts her foot into her slipper and recoils when she discovers a dead mouse. A huge bug crawls onto a desk, a woman kills it with a book, and we see goo splatter on the desk. We see sketches of human anatomy that reveal the bone structure and musculature of the limbs. A man appears to be stalking a woman: he videotapes her walking to work and while she is working. A woman describes the kinds of bugs that we live with every day (like dust mites), and a man is visibly grossed out. A woman says "we had to pry it out of his fingers" about a man found dead with a book in his hands.

MESSAGE - The Internet can kill you. 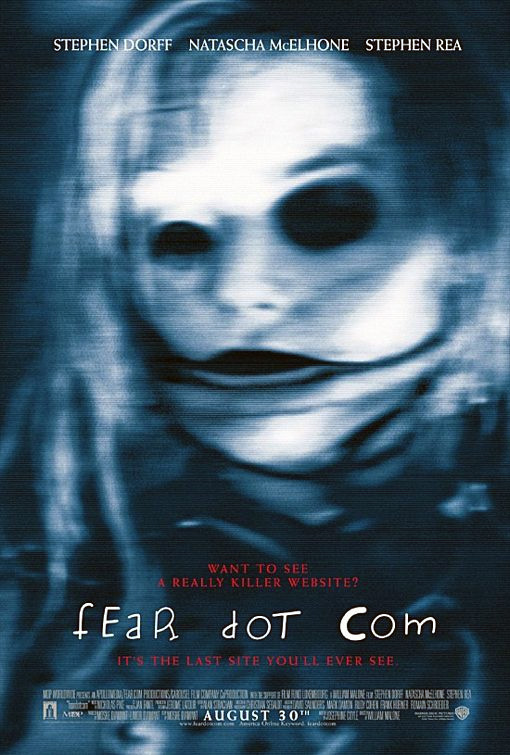