Adam Sandler plays a veterinarian working in a Hawaii aquarium, who is so afraid of commitment that he concentrates on having affairs with tourists, since he knows he will probably never see them again. One day he meets a local high school art teacher (Drew Barrymore) who suffers from short-term memory loss and he finally falls in love and is ready to make a commitment. There's a complication however: Since she can no longer form new memories and never remembers who he is, he has to make her fall in love with him every day. Also with Sean Astin, Missi Pyle and Rob Schneider. Directed by Peter Segal. [1:46]

SEX/NUDITY 5 - A man and a woman kiss, they go into a room, lie on a sofa and kiss, and a man watches briefly through a window making sexual gestures. A man and a woman kiss in many scenes; in one scene the man caresses the woman's abdomen and tries to touch her clothed breast. A man and a woman kiss in the rain, her shirt becomes drenched and we see the outlines of her nipples. A man and a woman sleep in bed together (we see the man's bare shoulder). A man imagines a woman pushing him down on the sand and kissing him. A woman (we think) grabs a man's buttock after asking if she can touch his muscles. A woman (we think) offers sex to a man and refers to her willingness to "experiment." A woman says to a man, "I want to do something extra fun tonight" (implying having sex with him); he declines her offer and suggests that she try "that guy over there," pointing to a character that appears to be a woman. Introductory scenes show many women discussing their whirlwind affairs with a man (a few make sexual references). A man and a woman flirt in many scenes. A man and a woman (we think) appear to be a couple. A man arranges, suggests activities and asks for detailed descriptions of another man's sexual conquests. A man dresses like woman with a wig and a bra made of coconuts: he caresses the coconuts and licks one suggestively. A man looks at and admires a woman. Walruses kiss each other. It is suggested that one character who looks like a woman is actually a man, although it is not clear. There are many sexual euphemisms and sexual innuendo: A man says to another man "pull on your poi-poi," a man tells another man to have "Waikiki between the cheeky" with a woman, a man imagines telling a woman that his "...nipples are too sensitive," a man talks about having "guilt-free sex" with a woman, a man talks about "his coconuts," a woman (we think) says that she "prefers sausage to taco," a woman says to a man that she would "shut her eyes while she serviced [his] manhood," a woman asks a man "Do we have sex?" and a man talks about having "wet dreams" in several scenes. A woman reads in her journal, "We made love. It didn't last long but it was incredible," and a man and a woman talk about the man's ex-girlfriend having been unfaithful with an older woman. There are several references to the enormity of a walruses "male part," a man talks to a walrus about the walrus' numerous partners, a man says to a walrus, "remember to use a condom," and a woman asks a walrus whether she should "take advantage" of a man. A man makes a sexual gesture with a dishwashing hose, a man makes a sexual hand gesture, a woman congratulates a man for having had a sex change operation, a man and woman talk about having many first kisses and the man argues that he should be allowed to caress her after so many first kisses. A man's shorts reveal a bit of buttock cleavage, and he puts a marijuana cigarette in the cleavage. Women in many scenes wear low-cut tops and dresses that reveal cleavage. A man flexes his gluteus and pectorals in several scenes. Men are shown bare-chested in many scenes.

VIOLENCE/GORE 4 - We see a photograph of a woman with a bruised and cut face and with a large incision scar on the side of her head. A car swerves to miss a cow that is walking across a road, the car spins a few times and slams into a tree, we hear that the driver suffered a few broken ribs, but that the passenger suffered brain damage (we see the accident a few times and see photos of the crumpled car in a newspaper article). A man punches and kicks a man several times, a woman hits the man repeatedly with a bat on the back and legs, then chases him and hits him repeatedly. A woman screams when she wakes up with a man in her bed, he screams, she hits him repeatedly with a stick and he lies on the floor unconscious. A man has a large bloody wound on his side (we hear that a shark bit him), and another man stitches him up (the wound opens up and bleeds in a few scenes showing a bloody spot on the man's shirt once). A woman screams and cries when she is told about an accident which left her with no short-term memory. A car runs over a penguin in the road (he's dusty but appears uninjured). Two men threaten a man, one of them jumps toward him, he tosses him on the ground and holds him there. A man hangs from a chandelier, it breaks free from the ceiling and he crashes onto the floor. A mast breaks in half, part of it swings toward a man who is trying to steer the boat, and he jumps clear. We see many people in a clinic with their heads bandaged: they have all suffered brain injuries and we hear about one who lost part of his brain in a hunting accident. A man throws a slipper at another man hitting him. A man pretends to be getting shocked by a battery jumper cable, and a woman screams and appears distraught when she tells him that that's how her grandfather died (it's a joke). A walrus appears sick (moaning and lying motionless), a man tries to help him breathe by pushing on his side, then the walrus vomits (for a long time) all over a woman. A man jumps off a dock and onto a speeding skidoo; we hear a crunch and he moans after injuring his private parts. We see a dead man (his skin is tinged blue) on a slab in a morgue and another in the distance with a toe tag. A man slaps a woman in the face with a fish. A woman smacks a man on the chest. We see a sonogram image of a pregnant sea lion.

SUBSTANCE USE - People are shown drinking alcohol and one character nearly lights a marijuana cigarette. A man eats a "special brownie" that's apparently laced with marijuana. It is suggested that one character is using steroids.

MESSAGE - Love is worth the effort of trying to overcome whatever obstacles there may be, even when they seem impossible to overcome. 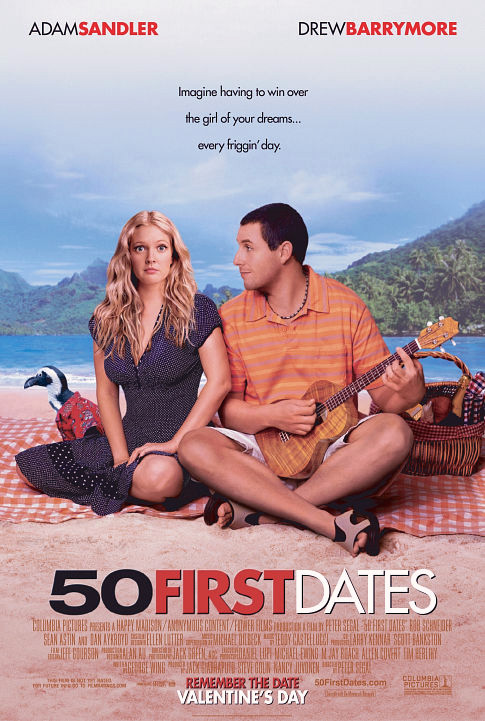