SEX/NUDITY 3 - A woman in bed under covers and wearing a thin-strapped slip reveals one bared arm and shoulder; a shirtless man beside her reveals his full bare chest, shoulders and arms as he speaks on a telephone while a man on the end of the line says that the Bible has a thing or two to say about adultery and the first man hangs up.
► A husband and his wife dance in a hotel corridor after their wedding, he dips her and smiles broadly; he carries her to a room off screen and the scene ends (sex is implied); later, we hear that the woman is pregnant, the camera cuts to a hospital nursery window full of newborn babies and we hear that she had a son. A husband and his wife (in a thin-strapped slip) stand at a window at night, viewing the city and they kiss briefly. A wife and her husband kiss briefly on a city sidewalk. Two heterosexual couples embrace and kiss briefly when WWII ends.
► We hear that the Catholic Church blames a man for breaking up a marriage by dating the wife of another man and they call for his suspension as a baseball manager; a baseball commissioner suspends the manager for a year and the manager slams a cabinet door in anger when he hears this. A baseball manager walks onto the edge of the field and shouts at the opposing hitter, asking how many of his teammates' wives he is "climbing on"; the hitter ignores him.
► In a baseball locker room, a white man wears only a long towel (revealing bare chest, arms, back and lower legs) and he speaks to a shirtless black man sitting on a bench (we see his bare abdomen, chest, arms and shoulders); the first man tells the second man they should shower together, the second man grins, the first man says, "That didn't come out right" and explains that race should not keep the shower segregated; the two men enter the steaming shower where we see several men and one man looks at the black man and leaves quickly, but no one else reacts.
► A man lies on top of the bed alone in dim lighting while wearing only shorts that extend to mid-thigh; we see his bare chest, arms, abdomen and legs. In one scene, we see a man alone in bed, covered to mid-chest with a sheet. A woman wears a slip with thin straps that reveals cleavage. In a hotel room, a man sits in a chair, shirtless. In three shower scenes, we see a man in a side view revealing upper chest and upper back.

VIOLENCE/GORE 4 - In newsreel footage, we see police officers roughly pushing black men along a sidewalk.
► A runner to first base spikes the first baseman in the calf; the injured man goes down, but gets help to stand up to finish the inning (we see no blood); in the clubhouse, the injured man lies on his stomach as the doctor stitches a six-inch cut that is red but not bleeding in close-up and the injured man grimaces a little.
► In a ballgame scene, a pitcher nearly hits a batter three times and then throws a fastball straight into the batter's forehead, knocking him down; players from both dugouts rush the field, pushing and shoving while shouting (no one injured), and the downed man watches dizzily from the ground; we later see a reddish abrasion on his forehead, covered by two pieces of white tape.
► Two black men in a car pull up to a curb by a bar when white men approach with scowls on their faces; the driver races off, weaving in and out of traffic, and tells the other black man that whites don't like him playing ball with white men.
► Throughout the film, a black baseball player is constantly belittled, insulted, profaned, discriminated against in baseball, and shouted down by white players and the white public in dozens of scenes. In a crowded ballpark scene, spectators shout vicious abuse at a black player for several minutes during warm ups until a white player crosses the diamond and throws an arm around the black man's shoulders, silencing the crowd.
► In one intense scene of ridicule of a black ball player, an opposing ball club manager steps onto the field near home plate and shouts insults at the black batter, using the N-word over 25 times and making sexual slurs (please see the Sex/Nudity category for more details); the crowd boos and calls the N-word, we see a close-up of the face of a white boy about 10 years old as he picks up on the chant and shouts "N-----! Get out! We don't want you!" and a white player on the black man's team rushes out of the dugout and confronts the opposing manager, telling him to shut his mouth or he'll do the shutting and the manager grins.
► A black ballplayer has several short arguments about segregation with white ball players, a gas station attendant and an airline clerk. A hotel refuses to house the Brooklyn Dodgers because they include a black player. A white player grabs a black player by the arm and they both begin shouting until other men hold them apart to stop a fight. A ball player steps off the field after his turn at bat and into the entrance tunnel of the stadium where he violently slams and breaks his bat against the wall three times, then screams and cries; the manager sees him and goes after him to help him calm down and the player returns to the game.
► A baseball manager shouts at a new black recruit, warning him that any display of temper against the ridicule he will receive while playing on a white team will hurt him; the recruit looks stunned and indignant, but agrees to keep his temper under control. A man slams an office door and shouts that he will wring the neck of a bigoted ball club manager; later, we hear that the manager was fired from baseball forever. In a motel kitchen, a ball club manager calls a team meeting at night and slams doors and knocks pans to the floor while he shouts at the team to make up their minds to accept a black ballplayer in their club.
► In three scenes, a baseball player running for home plate tackles the catcher so that the catcher cannot catch the ball for an "out" (no one is injured).
► We hear that a baseball player was court-martialed out of the US Army, because he would not go to the back of a transport bus. We hear that a ball club general manager received hundreds of death threats for hiring a black player and that the FBI was investigating.
► In a hotel room, a ball pitcher rests his apparently sprained elbow in a bucket of ice.
► A woman puts her hand to her mouth at a ball game and says she will be sick; the camera cuts to the ladies' room where she wipes her mouth in the mirror (we see no vomit) while another woman tells her that she may be pregnant.

SUBSTANCE USE - Several man walk out of a bar while holding open beer bottles and one takes a drink, several men drink beer from bottles, a man drinks from a can of beer while in a shower, a man drinks from a bottle of beer in a motel room and a man drinks a short glass of whiskey. Several scenes in an office and a ballpark show a man holding a cigar with rising smoke (he does not smoke), and a man is shown holding a pipe but not smoking it. 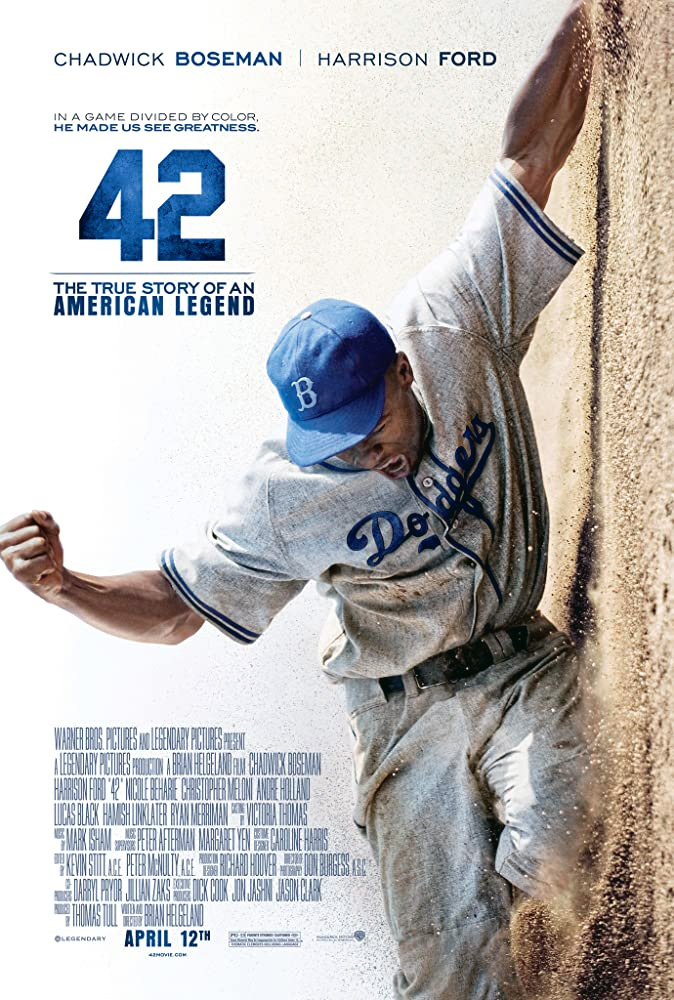