Why is “Escape Room: Tournament of Champions” rated PG-13? The MPAA rating has been assigned for “violence, terror/peril and strong language.” The Kids-In-Mind.com evaluation includes many scenes of death and near death caused by melting in acid, sinking into sand, by electrocution, a plane crash, a near drowning, and at least 2 F-words and other strong language. Read our parents’ guide below for details on sexual content, violence & strong language. Sequel to 2019’s Escape Room: Six people find themselves trapped in a series of escape rooms once again, after solving the puzzles that allowed them to escape the previous hazards. With Taylor Russell, Logan Miller, Deborah Ann Woll, Thomas Cocquerel, Holland Roden, Indya Moore, Carlito Olivero, Matt Esof, Jamie-Lee Money, Wayne Harrison and Lucy Newman-Williams. Directed by Adam Robitel. [Running Time: 1:28]

– Two women try to open the door of a cab as acid pours down on them, we see them melt into puddles, and a mist surrounds them. A beach setting has sand that sucks items and people under the surface; a woman is pulled under, a man puts on a life preserver and jumps into the sand after her, the woman surfaces and the man is pulled back up by a rope until the rope breaks and he is sucked back under, and presumed dead. A man climbs a ladder on the outside of a lighthouse and the ladder rungs reduce in size as his time runs out; he is unable to reach the top and he falls back into sand that swallows him and he disappears implying that he is dead. A man is trapped in a glass room as it fills with water and he yells for help; a woman on the outside causes an explosion, the flames break the glass and the water pours out onto the floor with the man coughing and then reviving.
► A man and woman on a subway train discover that the train is speeding along the tracks without a conductor; the train stops short and the people in it are thrown against the walls and to the floor. A man is electrocuted and slumps to the floor dead. Three women are trapped in an area where when a timer counts down, acid drops from above them (we see each of them with burn marks on their skin); one woman is trapped in the acid rain under an umbrella that melts and drips on her until she takes cover in a car. A woman is surrounded by a laser grid and she is zapped on the cheek and the back (we see some blood). Two men are zapped with electricity and they moan; one has blood on his face. A woman falls toward a laser grid but it stops as she falls through it (she is not harmed). A man steps on tiles in a sequence to solve a puzzle and exit a room safely; he falls and strikes his head on a counter knocking him unconscious (we see a bit of blood later). A woman runs through a laser grid dodging them without being harmed and jumps into a bank vault as the heavy door closes behind her. Several people hide in a cave and it begins to crumble causing them to run for safety. Sand pours into a building and it breaks apart as two women scramble to get out; a stove slides across the floor toward one woman that touches the red-hot burner burning her hand (we see a burn mark on her hand); one woman gets out and the other goes through a door inside and we don’t see her again until later. Two women climb onto a street through a manhole and a third woman runs toward them telling them not to close the hole (it closes). A woman in a taxi falls through a trap door under the seat and onto a bed in a room. A woman holds another woman over a deep hole and loses her grip; we see the woman fall and presume that she is dead. Three people climb out of a room and through a passage, and they slide under a closing door to safety.
► A man and a woman try to get into a warehouse and another man approaches them; he steals a necklace the woman is wearing and the first man and the woman chase him through streets and onto a subway where they are separated. A hotel room crumbles and the ceiling moves down toward a man in the room; the ceiling fan spins and hits the man and breaks apart and the man wakes up screaming. A man strangles another man on a TV show and we see blood in his mouth.
► Oxygen masks fall from compartments in a crowded plane as it jostles and a distorted voice makes an announcement over the intercom. We hear news reports of four bodies having been found in a deadly escape room and that the authorities are closing in on those responsible. A woman talks about people falling into ice and we see a flashback to an ice-covered lake and people moving under the surface before they apparently die; she says, “I hear their screams and I see their faces.” A woman talks about her fear of flying and that her mother died in a plane crash; we see flashbacks to the crash scene with a dead woman dangling from the wreckage as her young daughter calls for her. A woman says that she cannot feel physical pain.
► A woman opens a cooler filled with crabs and she reacts to the odor. A man pulls a seashell off a mannequin’s eye and we see a hole with an electrical plug in it that the man pulls out.

– A man tries to light a cigarette in a car and a woman stops him.

– Our memories are a treasure. You can’t cheat the game. 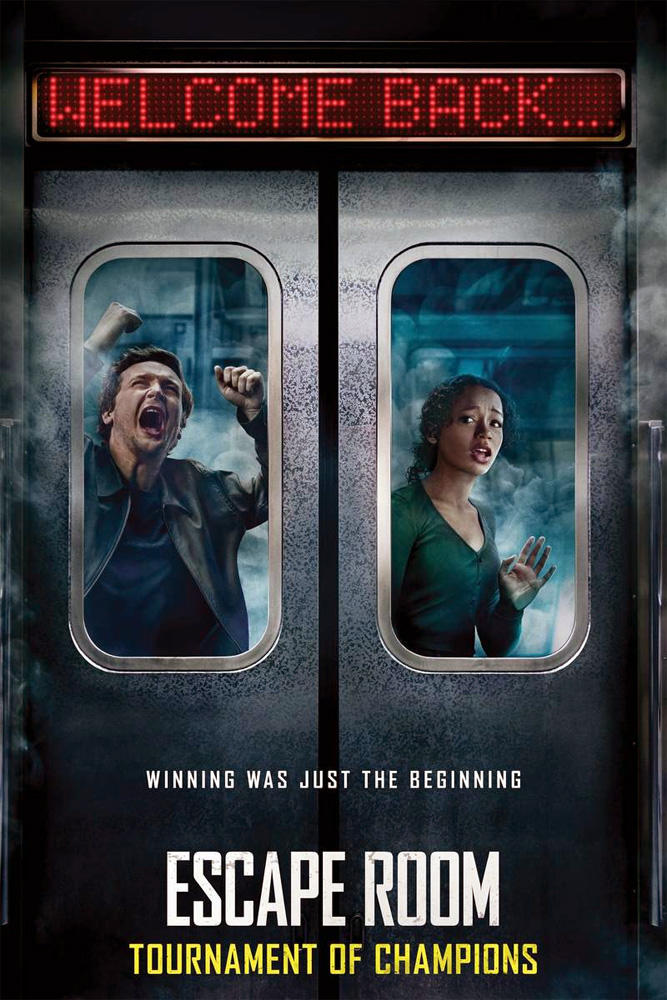