Missionaries travel to the Amazon basin in search of a little known tribe, the Waodani, in hopes of converting them to Christianity. Misunderstandings abound when they are unable to communicate and the missionaries are murdered by tribe members. The missionaries' wives continue to try to convert the Waodani to Christianity and forgive the killing of their husbands. With Chad Allen, Louie Leonardo, Chad Allen, Jack Guzman, Christina Souza. Directed by Jim Hanon. [1:52]

SEX/NUDITY 3 - Waodani women wear short skirts and wraps that cover their breasts, and Waodani men are shown in their native garb that consists of a small loin cloth that reveals their bare chest and buttocks. Several men are bare-chested in a couple of scenes. A man removes his pants and is left bare-chested and in boxer shorts. Two nude toddlers swim (we see bare buttocks, while their genitals are not clearly visible).
► A husband and wife kiss a few times. A Waodani man says that they need women to make them drinks, in several scenes.

VIOLENCE/GORE 7 - Waodani men spear several men, the men fall to their knees, one falls into a river, and blood soaks their shirts as they scream -- we hear crunching when the men are struck by the spears, and one man shoots a pistol in the air as he falls to the ground dead; two Waodani women hack at the fallen men with machetes (we do not see the men being cut up, only the strokes). We see parts of the massacre scene repeated again in flashback.
► One group of Waodani attack another group, one man is speared through the shoulder (we see blood on the wound and the man breaks the spear off), and then through the abdomen (we see the man lying on the ground with the spear sticking out of his abdomen and blood on the wound); others are speared, we watch one die and it is implied that many of the men are killed and the women of that group are absorbed into the first group.
► A Waodani man is speared by another Waodani man three times in the chest and abdomen, and we see blood on the man and we hear three crunches when he is speared.
► A man holds a spear to the chest of a Waodani man and appears to want to kill him but does not. A Waodani man holds a Waodani woman by the hair and raises a machete to her, she pleads with him not to kill her and states that she is pregnant.
► A huge snake pulls a girl off a boat and into water, three Waodani men jump into the water slashing at the snake, and they pull the girl out of the water but she is dead (we see her dead later).
► A dead Waodani man is found with many spears in his body and blood on the wounds. We see a dead man floating in shallow water, wrapped around a fallen tree.
► A Waodani man is stung by a stingray, a Waodani woman says that he has been "poisoned," and the man thrashes in pain. A Waodani man sits in a hole in the ground waiting to die and he calls for his infant son (presumably to be placed in the ground with him to die).
► A Waodani man chases a leopard through thick jungle, he is distracted at one moment, the leopard leaps on him, but it is speared through the chest and falls on the man (we see the blood-soaked spear). A Waodani man spears a wild boar (we see it with blood on the wound) and blows darts at monkeys swinging in trees (they fall to the ground). We see a dead monkey lying on the ground, a Waodani man strokes it and swears to avenge its death by finding and killing the leopard that killed the monkey.
► Several women are told that their husbands were found dead after having been murdered by the Waodani. We hear that a woman died of cancer and we see her body in a coffin as it is hammered shut. A Waodani man talks about a woman having been killed and eaten by the "foreigners" and that they attacked him. We hear a man talking about how many people the Waodani have killed. The Waodani talk about "foreigners" coming and that they are cannibals. A boy talks about hearing stories about the violence of the Waodani.
► A Waodani man is chased by several dogs who bark and snarl at him, men shoot at him, and he runs away, diving into a river and swimming away unharmed.
► A Waodani man drags a Waodani woman by the hair. A woman gives people injections in their arms. A boy throws sticks and stones at a dog (we hear the dog yip and it runs away).
► A Waodani woman swings on a bucket that dangles from a rope attached to a plane, the plane begins to go out of control, the rope is cut and the plane flies away (the woman is OK)
► A man tells his son that they cannot shoot an indigenous group of people because "they are not ready for heaven." A group of Waodani burns their huts and moves to another place in the jungle.

SUBSTANCE USE - The Waodani men talk about needing "drinks" and it is uncertain whether they are alcoholic or not.

MESSAGE - Religion can redeem anyone. Even murder can be forgiven. 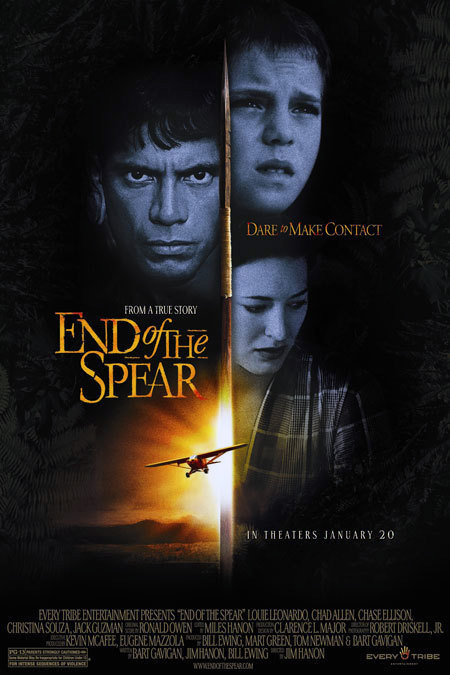