Why is “Encanto” rated PG? The MPAA rating has been assigned for “some thematic elements and mild peril.” The Kids-In-Mind.com evaluation includes a couple of kissing scenes, the evident but off screen murder of a man in front of his wife, frightening visions that depict the crumbling of a house, a girl in peril, people in danger, a few arguments and some mild language. Read our parents’ guide below for details on sexual content, violence & strong language. Animated tale about a young girl (voiced by Stephanie Beatriz) frustrated by being the first in her family to not receive a gift of a special power. Feeling like an outsider, she tries to find a way to get back in her grandmother’s good graces. Also with the voices of María Cecilia Botero, John Leguizamo, Mauro Castillo, Jessica Darrow, Angie Cepeda, Carolina Gaitan, Diane Guerrero, Wilmer Valderrama and Rhenzy Feliz. Directed by Jared Bush, Byron Howard & Charise Castro Smith. [Running Time: 1:39]

– A man and a woman kiss in a couple of scenes. A man and a woman are married and we see them kiss at the ceremony; the wife tells her husband that she is pregnant with triplets and he falls back on a bed in shock.
► We hear that a young man is going to propose to a young woman and someone says that he wants 5 babies. A woman’s dress reveals cleavage in a few scenes.

– A woman relates a story about how a family came to be living in a magical place and why they are imbued with special powers; a flashback shows a woman holding triplets as armed men on horseback ransack a village, many people run away, and one man stands in front of the armed men and we understand that he was killed. A house crumbles and people scatter trying to get away from the rubble; a man jumps through a wall with a bucket on his head and a girl is trapped but sheltered by a pile of furniture that collects around her, and when the rumbling stops she runs away.
► A girl chases mice into a passage where she finds a man and chases him, and she falls from broken timbers and dangles from a piece of bamboo before the man grabs her hand and he falls over the edge; the girl holds the man by the hand but drops him when she is startled by a mouse (he falls a short distance into shallow water, without injuries).
► A young girl goes toward a door with a glowing handle to receive her special power and when the glowing stops and the door disappears, she does not receive a power and she sees how disappointed her grandmother is. A girl enters a forbidden room and a magical house tells her that it can’t help her there; the girl walks along dark stairwells and through passages, she comes upon a chasm and uses a rope to swing across and when she stomps on the ground on the other side, part of the ground breaks away and she stumbles back, bumps into a vase and mice skitter out and screech; she then goes through a large door that closes loudly behind her. Trapped in a room, a girl sees glowing pieces of a puzzle on the floor; she puts them together and sees a depiction of a disaster that scares her. A girl races to a celebration and reports that their house is crumbling and the candle that apparently gives the house its magical power is flickering; the grandmother and others go to the house and see that everything is fine and the woman yells at the girl for lying. A young woman yells at her younger sister accusing her of ruining her life. A man is struck in the nose by a plant abruptly shooting up, out of the ground, in a couple of scenes and we see him with a bandage over his nose in one scene.
► A woman yells at her granddaughter and blames her for the problems that are taking place; the girl yells at her grandmother and tells her that she always saw the worst in a man that eventually went into hiding. A leopard stands over two mice with its mouth wide open and a young boy tells it, “Don’t eat those.” A man yells, “I don’t care what you think of me.” We hear about the special powers some people have, which include being able to see the future, super strength, being able to heal people with a meal, controlling the weather, shapeshifting, and understanding animals.
► A house rumbles, walls begin to crack and rain pours down on people gathered around a dining table. A house rumbles and we see cracks appear in the walls as a tile from the roof falls to the ground below shattering. A man prepares for a vision, his eyes glow green, and wind blows around him and a girl as he sees a house crumbling.
► A leopard scoops a young boy onto its back and runs through trees; the boy falls and is caught in a hammock and other animals help him. A house comes to life and we see it moving and helping the family that lives inside it. A chair sweeps a girl from one spot at a table to another when her grandmother becomes upset with her and tries to keep her quiet. A woman is shown to have super strength and we see her carrying a pile of donkeys in a few scenes, and she kicks the wall of a house to make it stand up straight; an imaginary scene shows her fighting a three-headed dog with a sword and punching an iceberg that stands in the way of a sailing ship.
► A man is shown with a badly swollen ear, nose and hands after being stung by bees in a few scenes. A woman is shown with dark clouds hanging over her and they sometimes rain and clap with thunder. A young woman flings her hair into a girl’s face. A young boy is afraid of not getting a gift (special power) and he hides under a bed. A man spits out water onto other people at a table when he is startled by something he hears.

– People at a dining table are shown with glasses of wine (we do not see anyone drink). A boy and two girls drink coffee that makes them hyperactive and jittery in a few scenes.

– Big problems can be fixed when people work together.

(Note: “Far From the Tree,” a short film precedes the feature and contains the following: A raccoon follows its mother and she repeatedly catches it when it sneaks away and she angrily screeches at the young animal, and slaps a shell out of its paws when it won’t stay put; it then gets away and is confronted by a wolf that scratches it on the nose before the mother raccoon intervenes and we see that the mother has a long scratch over her eye from a previous encounter with a wolf.) 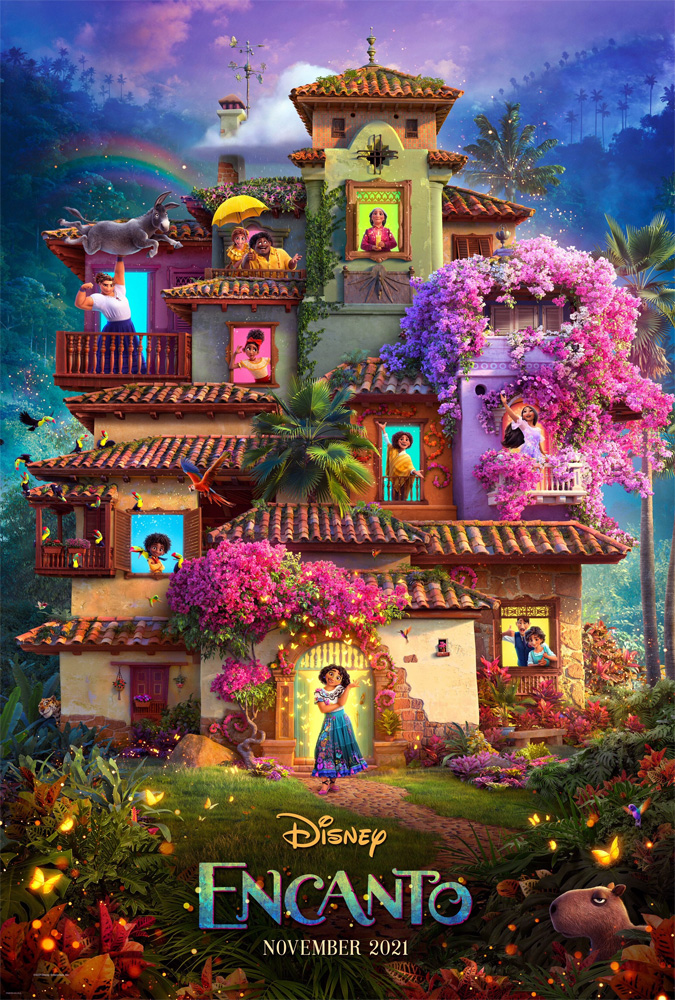