Why is “Emily and the Magical Journey” rated NR? The MPAA has not rated this film. The Kids-In-Mind.com evaluation includes a reference to kissing and several cleavage revealing outfits, encounters with magical creatures and beings with a few perilous activities undertaken by a young girl, without injuries incurred, and some name-calling. Read our parents’ guide below for details on sexual content, violence & strong language. A young girl (Tipper Seifert-Cleveland) finds herself in a magical land where she is the only person that can save the creatures living there from a darkness that has begun to overtake them. She also begins to understand her mother’s grief after her husband died. Also with Harriet Slater, Chelsea Edge and Jenny Lampa. Directed by Marcus Ovnell. A creature speaks in an unidentified language partially translated. [Running Time: 1:25]

Emily and the Magical Journey SEX/NUDITY 1

– A young girl teases her mother as to whether she wants to kiss a man, after they were talking and flirting.
► Women wear low-cut tops and dresses that reveal cleavage in several scenes. Two large creatures are shown with two fur-covered abdomens and buttocks.

Emily and the Magical Journey VIOLENCE/GORE 2

– A young girl climbs into a bucket and lowers herself into a deep dark well: when she reaches the bottom she follows a light into a passage where she hears voices telling her several disturbing things (“Go back,” “You won’t make it,” “She doesn’t love you,” and “It’s your fault your father is dead”); she screams to make it stop and she sees images of her mother suffering debilitating grief after her husband died. An earthquake rumbles and a girl runs out of a deep well as large ice columns collapse around her; she pulls herself up to the surface very quickly and she is helped by the explosions below.
► A large creature runs toward a girl and picks her up, running with her until it collapses (it seems exhausted). A young girl sees glowing creatures flying over a river at night and they fly away; she follows them and finds a glowing crystal hovering in the air and as she approaches it, the screen fills with a bright light and the girl awakens in a forest unharmed. A woman introduces a young girl to a large creature (it has the head of a bull with large horns and claws), she screams and the creature moans (it sounds afraid). A young girl tries to walk through a burned out field, a vine grabs her leg, and two large creatures run after her when she gets away. A young girl walks through a forest and steps onto a bridge as a woman sees her and becomes frightened and hides. A young girl follows a woman into a passage under a tree but can’t fit between tree roots. A young girl touches a book and a flying creature flits off the cover and sprays glowing trails behind it. A woman blows on a handful of glowing particles that turn into flying creatures and when a young girl steps on them, they fly through the air with her and she screams; we see her lying on the ground later near a burned field and a castle and she is frightened as large beams of light shoot into the sky and the ground rumbles.
► A crystal glows in the sky and several creatures are revived after having fallen motionless, the sky turns blue from grey, the fields fill with flowers and a castle builds itself back up. A woman grabs a young girl and carries her over her shoulder and they pass two men tied to a tree with a rope (the woman and a creature took their clothes to disguise themselves). Three men walk through a field and yell telling a girl there is danger; we see them again trying to save an area from turning to darkness.
► Several men murmur in a huddle and accuse a young girl of waking the monsters. A woman tells a young girl that fear makes a field of darkness grow. A woman describes what happened after an earthquake that caused a crystal to fall from the sky, saying that the darkness started to spread, a witch moved into a castle and children turned into adults. A woman watches people moving around in the distance and she says, “I love the smell of fear.” A young girl hears a noise coming from a room and enters it where she finds a chest filled with paintings and children’s stories; her mother finds her and becomes angry yelling, “You know you are not allowed in here,” and tells her to go to bed. A woman reads about children in a book and decides that a young girl can save herself and creatures in the area that find themselves in a dire situation. A young girl talks to a photo of her father in a couple of scenes.
► We understand that a young girl’s father died but we do not know how. A young girl seems sad when there is no one in the stands to watch her play a basketball game. A tiny fur-covered creature is shown in a bottle and it bounces up and down, a creature made from braided roots is shown in a small jar and a winged creature is shown in another when a woman says they are the last of their kind. A woman pulls several large objects out of her dress (they are not evident until she pulls them out magically).


Emily and the Magical Journey LANGUAGE 1

Emily and the Magical Journey SUBSTANCE USE

Emily and the Magical Journey MESSAGE

– With the courage to dream, anything is possible. 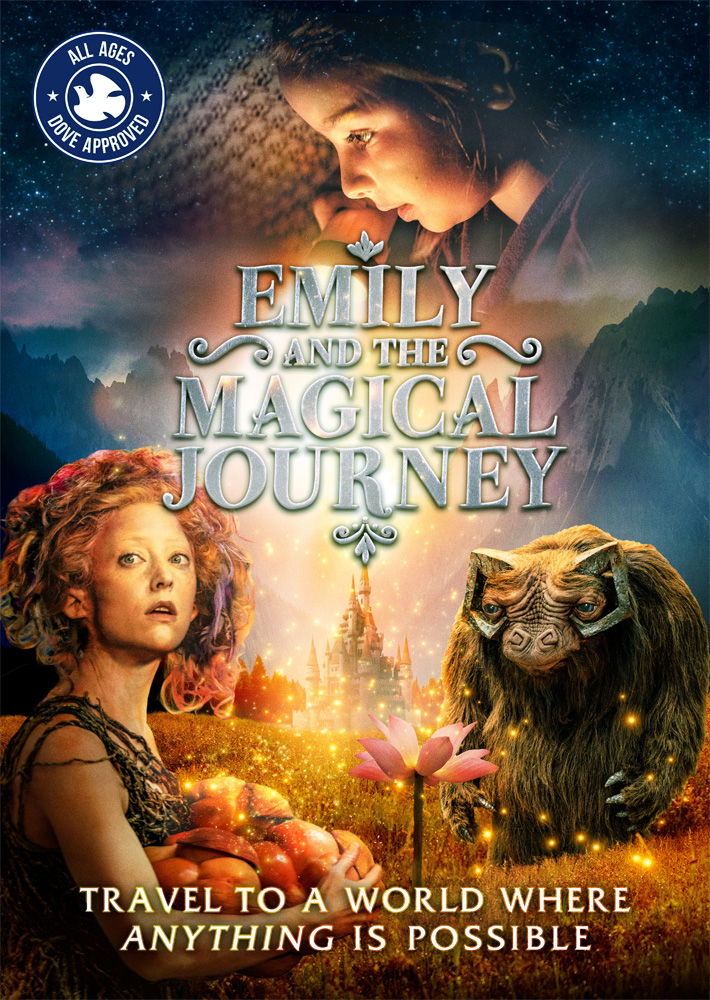