A new take on the classic fairy tale of Cinderella: Ella's father marries an unpleasant woman whose two abusive daughters do their utmost to make Ella (Anne Hathaway) miserable. In this version Ella is given the "gift" of obedience at birth by a fairy, and she has no choice but to obey any command, by anybody. As Ella gets older it becomes more difficult to keep the spell a secret from people who wish to take advantage of her inability to say no. Also with Hugh Dancy, Joanna Lumley, Cary Elwes, Minnie Driver and Steve Coogan. Directed by Tommy O'Haver. [1:36]

SEX/NUDITY 3 - A young man and a young woman kiss and hug several times, and a young man and a young woman talk of love and hug each other. A young woman flirts aggressively with a young man. A giant woman caresses the hair of a male elf and they flirt; also a giant woman holds an elf man in her arms and they sing to each other about love. A man (he's magically trapped in a book) and a woman flirt. Young women kiss (or lick) the floor where a young man has walked (a woman says "don't tongue the floor"); also, the young women swoon at the idea of the young man showering "naked." Throngs of young women swoon over and chase a young man in several scenes. A young man and a young woman hug and dance together and he dips her. A young woman tears off part of her dress to reveal a short skirt and bare legs. Women wear low-cut dresses that reveal cleavage, a woman wears a short top that reveals her cleavage and bare abdomen. Women giants wear low-cut, short tops and short skirts that reveal cleavage, bare abdomens, bare legs. Men and women giants dance together. A young woman wiggles and thrusts her hips while dancing (she's forced to do so). A young woman sings and dances with a few provocative moves. A man is bare-chested while having his arm bandaged. We see the giant buttock cleavage and part of the bare buttocks of ogres in a few scenes. Elf women wear low-cut, short outfits with fishnet stockings and they dance in a line (cabaret-like).

VIOLENCE/GORE 4 - A young woman holds a dagger over a young man intending to kill him, she drops the dagger, is led away by guards and locked in a prison cell (a man says "she'll have to be put to death"). A man talks about ogres having "ripped" a man "to shreds." A girl's mother dies (we see the woman lying ill in bed). A man plots to kill a young man. A young woman beats up two men with many punches and kicks. Ogres fight with human guards, knocking them to the ground, and one ogre sits on a guard. Giants also swat guards sending them through the air. Men and women, giants and ogres, fight with guards with punches, kicks and sword play. Ogres knock out guards and one opens his mouth as if to eat the guard's hand. A man puts a poisoned crown on his head, we hear sizzling, he whimpers and collapses (we see him later with a bandage on his head and seemingly stupefied). Three ogres surround a woman and an elf and threaten to eat them, they pull a knife, and the woman is tied and dangled over a pot of boiling water. Men with swords fight three ogres who hold large sticks with nails sticking out of the end, and they knock each other down, an ogre stands over a man with a stick. An ogre is tied, dragged behind a horse and slams into a tree between his legs (he's obviously in pain), and an ogre is held with a sword to his throat (one man has a cut on his arm and we see a bit of blood on his shirt sleeve). A guard throws an elf through the air and the elf crashes into a stone wall. A snake rises up to bite a young man's leg, a woman stomps on it and kicks it across the room and a group of other women charge it, threatening to hurt it. A young woman stands in a road, a horse and carriage charge toward her and she is knocked out of the way just as they pass. Giants (whom we hear are gentle beings) are whipped and forced to work in fields as slaves. Two men shoot stones (with a slingshot) at an elf who is tied to a large wooden wheel, and when he is released he falls to the ground, stretches his neck and we hear loud cracking. A young woman chains herself to a tree. A young woman shoplifts from a market place (she is forced to), guards chase her, she runs away knocking into people, she swings from a banner, leaps over barrels and crashes into one that is filled with wine. Guards force elves into a carriage and take them to the kingdom where they will be forced to sing and dance. A giant steps on a snake and the snake faints. A large snake slithers around a scepter handle in several scenes, and appears threatening. A group of girls tease another girl for being different and one of them shoves her to the ground. A girl bites another girl on the arm. Two young women boss another young woman around, forcing her to do things that she doesn't want to do, and they also tease and abuse her. A woman smacks a woman on the head with an envelope. A young woman is dismissive and abrupt toward a young man. Throngs of young women chase a young man in several scenes: In one scene the man runs and knocks down another young woman. Three women are covered with poison ivy blisters (they scream and scratch). A woman has a facial treatment that makes her face look malformed (as if from an extreme facelift). A young woman faints from excitement. A giant flatulates and the gust blows an elf off a bench. An infant girl urinates on a woman when she lifts her up in the air.

SUBSTANCE USE - People are shown drinking alcohol; some to the point of intoxication

MESSAGE - Nobody should be forced to do something they don't want to do. Image is not everything. Will power and love can triumph over spells. 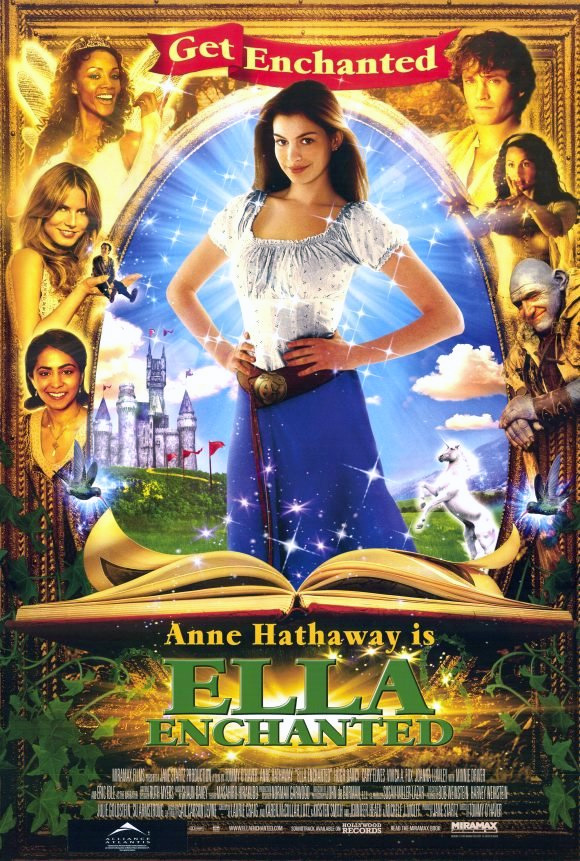