Paul Walker stars as a guide in the frozen wilderness of Antarctica. When a scientist (Bruce Greenwood) arrives searching for a meteorite that just may have come from Mercury, he takes him, against his better judgment, to an extremely isolated and unmapped region. Then a severe storm forces him to leave behind his team of beloved sled dogs. Inspired by a true story. Also with Jason Biggs and Moon Bloodgood. Directed by Frank Marshall. [1:52]

SEX/NUDITY 2 - A man and a woman kiss, a man kisses a woman on the cheek and a man and a woman hug a couple of times.
► Two men talk about relationships and family and a man talks to another man about "striking out" with a woman.
► Two men are shown bare-chested in a sauna.

VIOLENCE/GORE 4 - A leopard seal bites the leg of a dog (we hear the dog yip and see blood on its paw), and other dogs jump on the back of the seal and bite it; the seal gives up and swims away. A dog pulls a piece off the carcass of a dead whale, it runs, and a leopard seal chases it; the seal dives through the ice and swims beneath the dog, which runs along the surface. A dog eats from the carcass of a beached whale, a leopard seal lunges at it and snaps its sharp, blood-drenched teeth at it (the dog runs away). Leopard seals are shown fighting over food (they are very large and have pointed teeth).
► A dog falls over a ledge and down a slope, we hear it whimper and it lies still (we see the dead body partially buried by snow the next morning, and the other dogs cry for the dead dog and one lies down with it).
► A sled dog has a bloody paw (we see bloody prints in the snow). Dogs chase birds, catch them, carry them in their mouths (the birds hang limp) and then eat them. One dog snarls at another dog that's trying to eat from a bird.
► A man falls down a slope, he breaks his leg, falls into frigid water and begins to freeze and he has trouble breathing (he turns bluish); he then is pulled out of the water and wrapped in many layers of blankets. A man's fingers are frostbitten and they are tinged blue.
► A sled breaks through ice, the man on the sled is thrown into a hole, hangs from the sled and he is pulled back up (he is uninjured). A man has a very bad cough and collapses while driving a sled that's being pulled by dogs.
► We see a dog buried in snow (its limp ear and collar are visible). A man grieves over a dog that's lying still in the snow, assuming it is dead. A dog lies still in the snow after a cold, stormy night. A dog separates from a pack to remain with a dead dog, and it howls and calls for the others.
► A dog knocks a man down and licks his face. A man steps on another man's chest and throws a boot at him (they're play fighting).
► Eight sled dogs are left at a camp when humans are forced to evacuate because of injuries. Several people plan a dangerous expedition. Several dogs pull a heavy sled with equipment and two men on it through deep snow, in several scenes. A man talks about working dogs and that they will, "run themselves to death." A dog licks a man's face and mouth, the man panics, falls on the ground, burps and gags.

SUBSTANCE USE - People drink alcohol at a celebration.

MESSAGE - You have to take chances for the things you care about. 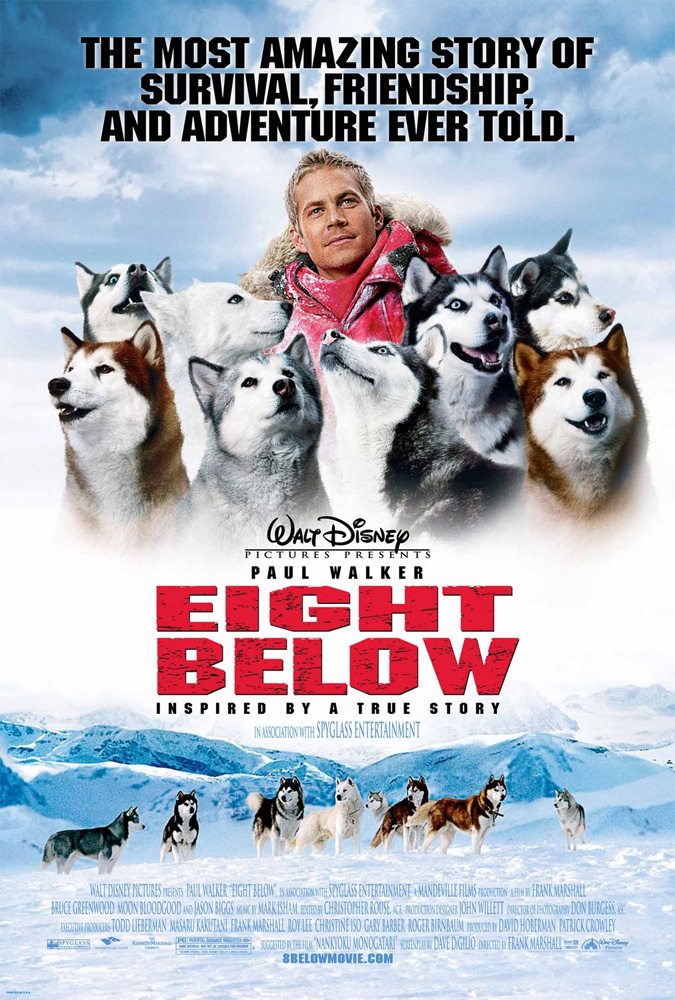