Crime thriller taking place in modern London: A midwife (Naomi Watts) helps deliver a baby by a 14-year-old Russian girl who dies, and she soon discovers through the girl's diary that she was forced into sexual slavery by a Russian organized crime family. While she tries to find out more about the girl, she meets the Russian-born (Viggo Mortensen) driver for the crime family, who repels and attracts her at the same time. Also with Vincent Cassel, Armin Mueller-Stahl and Sinead Cusack. Directed by David Cronenberg. [1:40]

SEX/NUDITY 8 - A man has sex with a young woman: she is on her hands and knees (we see her bare breasts and thighs as he thrust from behind and we see his bare chest and thighs) and he climaxes while another man watches.
► A fully nude man fights with two men in a steam room and his genitals, bare buttocks, back and chest are all visible in brief glimpses. A man sits fully nude in a stream room, and his genitals, bare buttocks, back and chest are visible. A young woman lies nude on a bed (we see her bare shoulders, abdomen and stocking-covered legs while her arms cover her breasts and her leg covers her pubic region). Several women wear low-cut dresses that reveal cleavage. Two men are shown bare-chested with towels wrapped around their waists in a steam room.
► A woman dances around a pole: she is wearing a short skirt that reveals her bare thighs, a man watches her and tries to kiss her (his shirt is open and reveals his bare chest), two other women in the room kiss and another man and a young woman kiss.
► We hear that a 14-year-old girl was pushed down a flight of stairs, then brutally beaten by a man, and raped by another, much older man. A man says that London is a city of homosexuals and that London has made his son gay.

VIOLENCE/GORE 9 - A young man nervously runs into a barbershop, locks the door and pulls the blinds, and then slashes a man's throat with a straight razor, using a slow sawing motion -- the victim gags and gasps, we see the open wound, and blood spurts and soaks the man's shirt.
► A man tries to stab a man, they fight, one man is slashed on the abdomen (we see blood), and they wrestle on the floor and struggle over a knife; another man joins the fight and one man is stabbed in the chest, a man is slashed on the back (we see a bloody slash), many punches are thrown, and one man is stabbed in the back of the head (he twitches and dies).
► A man with a knife in his chest pulls the knife out and tries to stab a man who takes the knife away by breaking the man's arm and then stabs him in the eye (we hear a crunch and see blood pooling on the floor from his face).
► A young man urinates on a gravestone, two men approach him from behind, one slashes his throat (we see the slash open and blood pours from the wound as the young man gags and collapses dead on the ground).
► A man cuts off the fingers of a frozen corpse (we see one cut and the severed digit falls on a table; there is no blood).
► A man uses a blow dryer to thaw out a frozen corpse's clothes so he can remove his wallet. We see a dead man in a chest freezer (he has blue-tinged skin and blood around his mouth and neck).
► A pregnant teenage girl bleeds on the floor (we see blood on the floor and her legs and feet) of a pharmacy and collapses after asking for help.
► We see a dead body on the shore (it's very pale and bloated and has sand in its mouth) and we see that he has many tattoos, and that all of his fingers have been cut off.
► A baby is born and lies motionless on a table covered with blood; the baby begins to breathe after receiving oxygen and we hear that the mother died (we see her lying still on a table).
► A man kicks another man in the stomach and crotch. A woman yells at two men, one man lunges at her and pushes her back against a car, and the other man pulls him off. A man slaps another man in the face.
► A man prepares to throw a baby into a river in order to kill it (he is stopped). Two men throw a body wrapped in a blanket into a river and we see it sink.
► We hear that a 14-year-old pregnant girl has puncture marks on her arms (we see bruising) and we hear that she and others are forced to take drugs. A man insists that another man has sex with a woman while he watches in order to make sure that he is not gay.
► We hear that a 14-year-old girl was pushed down a flight of stairs, and then brutally beaten by a man and raped by another, much older man. A man is introduced as "the undertaker" and he says he's going to take out a corpse's teeth and cut off the fingers. We hear that a man's mother died when he was young. A man tells a man to "deal with" another man, implying murdering him. A man complains that blood was drawn from him and that he's sure that he has the "queer disease" now. A man says that another man traded a little girl for brandy. A man talks to his niece about her boyfriend leaving her, and about her having miscarried because he was black and she was white. A 14-year-old girl talks about trying to figure out a way to commit suicide. A Russian man says, "You cannot trust a Russian." A man makes a threatening gesture toward another man.
► A man becomes angry and he throws a bottle of alcohol against stereo equipment, breaking the bottle. A man stumbles out of a car apparently very drunk and another man helps him. Soccer fans yell at and chide each other.
► A man puts a cigarette out on his tongue. We see the umbilical cord of a newborn being clamped. We see a man having his knees tattooed. A man spits chewed up nuts on a corpse. A man spits in a man's face (we see some goo). We see many heavily tattooed men.

SUBSTANCE USE - We hear that a 14-year-old girl and others are forced to take drugs, and we hear that a 14-year-old girl has puncture marks on her arms. A man drinks alcohol from a bottle in several scenes (he is portrayed as an alcoholic), people are shown drinking alcohol at a celebration, men drink alcohol in several scenes, a man drinks shots of alcohol, a man stumbles out of a car apparently very drunk, a young man drinks a beer, and people smoke cigarettes and drink alcohol at a party. Men smoke cigarettes in several scenes and a man puts a cigarette out on his tongue.

MESSAGE - Dreams of a new life in another country may result in forced prostitution, drug addiction and death. 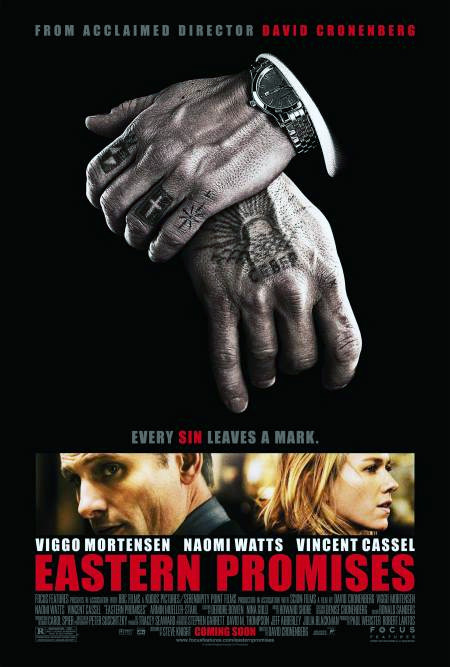