Rap artist Marshall "Eminem" Mathers makes his acting debut in this autobiographical drama set against the 1995 hip-hop scene in Detroit. He stars as a trailer park kid whose ambition is to become a great rap artist, while dealing with his unemployed mother (Kim Basinger), an ex-girlfriend who may or may not be pregnant (Taryn Manning), and a current one who wants to escape their surroundings as much as he does. Also with Mekhi Phifer and Eugene Byrd. [1:58]

SEX/NUDITY 6 - A man and a woman kiss passionately, caress each other, he opens her dress and we see her bra, panties and stockings; he drops his pants and we see his leg, she hikes her leg up to his waist and they begin to thrust and moan until they both appear to climax. A man and woman having sex in an office (they're partially clothed) are interrupted; we see them thrusting briefly. We see a nude woman (bare back and buttocks) from the back, seated on a man's lap and bobbing up and down (we also hear them both moaning). Men and women dance suggestively, men and women kiss and caress each other, and men and women flirt. A man pulls down his pants and we see his bare buttocks. A woman talks to her son about her sex life. A man admires a woman as she walks up stairs in a short skirt. A woman wears tight, short skirts and tight sweaters that reveal cleavage, bare abdomen and fishnet stocking-covered thighs. A younger man is having a sexual relationship with an older woman. A man talks about his girlfriend being pregnant.

VIOLENCE/GORE 5 - A man puts a gun in his pants and accidentally shoots himself in the leg (we see a little blood on his pantleg and then a lot of blood on his clothes and the hands of two other men who are with him). A group of men surround and threaten another man, and one man threatens him by holding a gun to his face; they begin punching, kicking and shoving him over and over again, while a little girl watches from a nearby window and screams in terror (we see the man bloody and bruised later). A group of men fight another group of men with punching and shoving, some are slammed to the ground and one fires a gun in the air and waves it around. A man pulls a man's legs out from under him and he falls down onto the hood of a car, some other people shove and scuffle and a man pulls a gun. A man attacks another man slamming him into a table and wall, and punching him in the face repeatedly (we see the man's bloody nose). A man and a woman argue, he shoves her back into a table, another man jumps him and they fight with punches, slamming into furniture and the floor. A man shoves another man and gets very close to his face while yelling at him. A group of men pour gasoline on an abandoned house, then one lights a book of matches and sets it ablaze; the men in the house scatter trying to get out before they are consumed (one jumps from a rooftop onto the roof of a car). Two men shove each other in a few scenes. A man throws a beer bottle at a man, it nearly hits him in the head, then the two men yell and shove each other. There are a couple of conversations about a young girl having been raped by a drug dealer in an abandoned building. During the rap "battles" (there are a few of these scenes), the contestants hurl verbal insults and threats at each other. A crowd boos and heckles a man off a stage. Two men yell at each other. Men shoot paint balls at a cow statue, a wall (nearly hitting two men) and at a police car. A man vomits in a bathroom; we hear gagging and see some spittle on his mouth (people make references to his "hurling on his shirt" later).

SUBSTANCE USE - People are shown smoking tobacco and marijuana and drinking alcohol. Two characters appear to have a drinking problem and one is shown falling down and stumbling while drunk.

MESSAGE - Extreme circumstances can force us to do what we know we can do, but may be afraid to try. 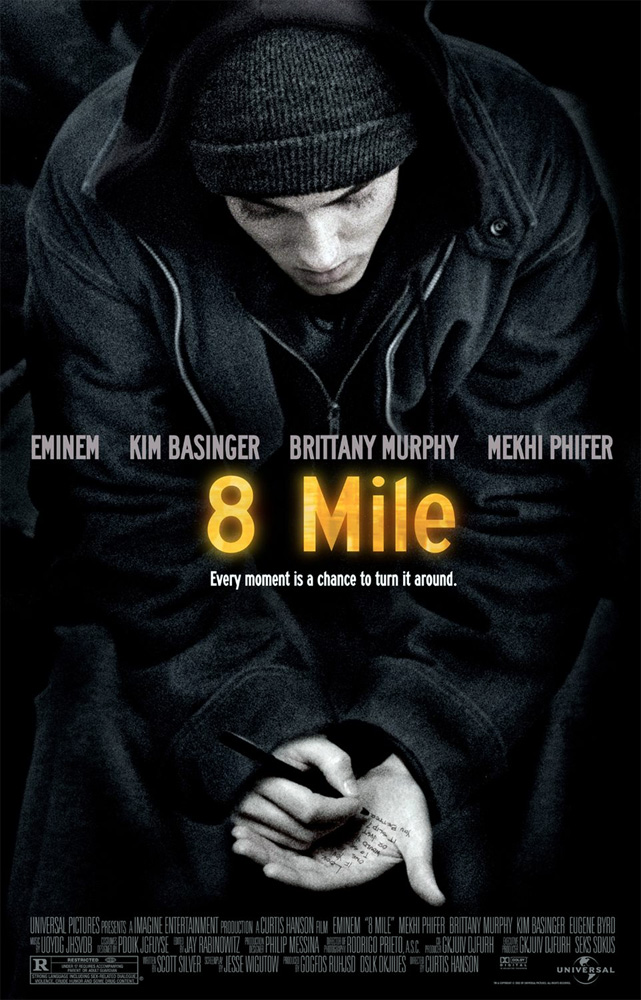