SEX/NUDITY 6 - Lots of sexual innuendo (including several references to fellatio) and some passionate kisses (one is between two men, who are doing it as a joke). One scene takes place in a strip club: many scantily clad women dance around poles; several women pour pitchers of water down their white T-shirts (the outline of their breasts is very clear); a man dances with several scantily clad women; and a woman licks and kisses a man's lips, reminds him about the "slippery lap dance" she gave him the night before, and then asks if he'd like to have another (they go into a private room, but no sexual activity occurs). Twice, a man imagines he's about to receive fellatio (he wakes up before anything happens). A woman in a cleavage-revealing dress lifts up her skirt and reveals her panties to a man; a close-up shows a bulge in the front, obviously because she has male genitalia. A woman tells a man he gave her money to see her breasts; she then puts his hand on her clothed breast (we see a close-up of this), and another man briefly puts his hand on her other breast. A blind boy feels a woman's face with his hands, then feels her clothed breasts for awhile. During a scene that looks like a music video, we see many scantily clad women dancing and a brief close-up of a woman's thong-clad (and mostly bare) buttocks; also, a shirtless man is massaged by several women and then squirts what appears to be sunscreen from containers he's holding near his crotch, simulating ejaculation. A man rubs his clothed nipples in front of two other men, a woman swallows a large cylindrical popsicle and licks her lips suggestively at two men, and two woman put on necklaces that make their breasts grow (we see a close-up of this, and also see two men's pleased reaction). A few times we hear a woman's surname, which is also a slang term for an erection. We see a close-up of a giant scantily clad woman's cleavage and a close-up of her panties as she steps over a man and a young boy; after she's destroyed, her large panties fall on top of a man. We see two nude men covering their groins, a man in his underwear twice, a few bare-chested men, a scantily clad female animated character dancing briefly during the opening credits, and lots of women in cleavage-revealing tops (several women who wear tight, cleavage-revealing bodysuits are seen several times; they tell several people that they're "really hot chicks" and tell a few men that they will give them erotic pleasure).

VIOLENCE/GORE 4 - Nearly all played for laughs. Two men are knocked out when hit in the head with a fire extinguisher, and two others are knocked out when zapped in the neck with stun guns. A giant, scantily clad woman eats a man, throws two men into a wall, and chases after some people before being destroyed by a laser beam (after she's destroyed, the man who was eaten lands on the ground, covered in black goo). Two men are hit by two different cars (the men roll on the ground but aren't injured). Ostriches surround two men, knock one to the ground, then chase them both into a car; one ostrich breaks through the top of the car and knocks the men out with a headbutt. A woman squeezes a man's hand when he reaches through a slot in a security window; she also threatens to cut off his finger after he reaches in again and gets his arm stuck (he and another person spit on his arm and eventually get it unstuck). A man is thrown onto a couch and briefly choked, a man slaps another's face, a person is slapped in the back of the head, a man is punched in the face, a man punches another's arm, a man accidentally backhands another, a blind child accidentally hits a man's crotch with a baseball bat and another blind child accidentally kicks his crotch (the man appears to be in a lot of pain), several men threaten to beat up two others and put trash cans over their heads (one man walks into a table and falls down), two men briefly scuffle, two men are thrown out of a house and then hit in the head with their shoes, two men are pulled into a van and driven around for a bit, two men are grabbed by their shirts a few times, police officers grab and arrest two men, men hold another man on the ground, two men climb over a fence and then roll down a hill, a passed-out partier falls from a roof into bushes, and a man punches and rips apart a drive-through window's speaker. During a police interrogation, a detective punches a dummy, throws hot coffee on its face, and also puts a lit cigarette on its arm, causing it to deflate. We see three men locked in cages, two people in shackles at a police station, and two people bound and gagged with bubble wrap. We see a sign that threatens trespassers with castration (the sign also includes a crude definition of castration). In two different scenes a dog growls at a man; in one scene it's implied that the dog bites a man's genitals. It's implied that a bird flies into a window (we hear a thud and a squawk). We see the outside of a house that has been trashed by partiers the night before. Several instances of scatological humor, including a man audibly urinating on a potted plant and a dog urinating on a plant and on a person lying on the ground.

LANGUAGE 5 - Two F-words (one is barely audible), a profane finger gesture (seen during the end credits), several anatomical references and slang terms (one is seen on a sign), some scatological references, several mild obscenities, and some insults.

MESSAGE - No matter how badly you screw up or how ignorant you are, you can still save the day. 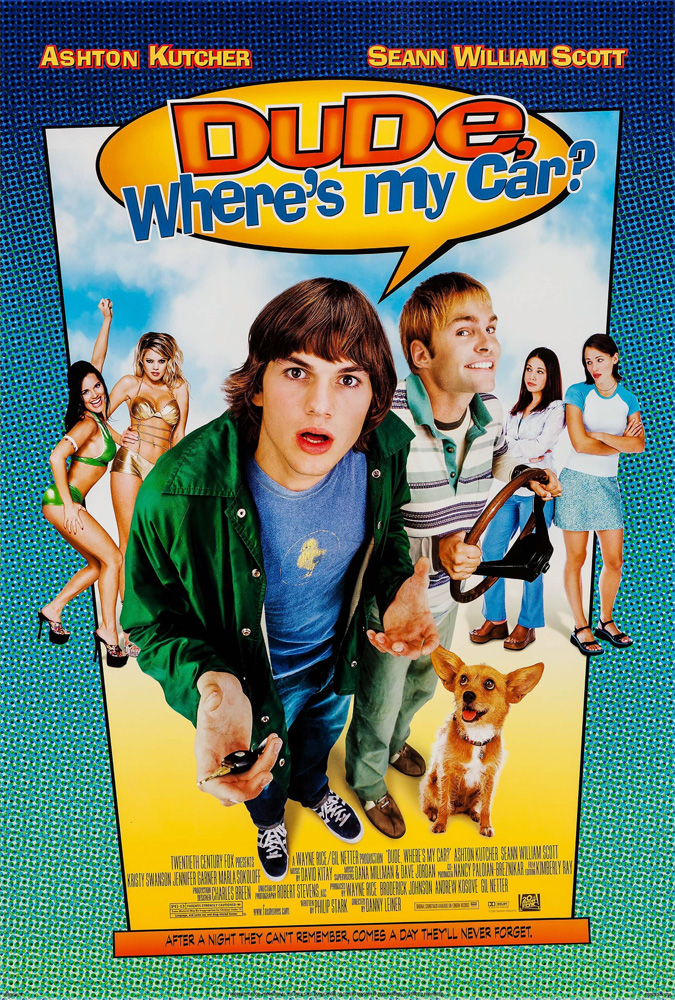