Mike Myers stars in the title role of Dr. Seuss' classic 1957 story of mischief: Conrad and Sally are left at home with a sleepy sitter and are ordered not to go into the living room "or else" by their mom. Well, just when things become more boring than they can bear, a giant, talking, not-so-good-at-rhyming cat in a striped stove-pipe hat appears at their door wanting to play. And, play he does until their house is in rubble and the children are begging him to leave. Also with Spencer Breslin, Dakota Fanning, Alec Baldwin and Sean Hayes. Directed by Bo Welch. [1:22]

SEX/NUDITY 3 - A man and a woman kiss on the cheek. The Cat reacts with interest when he sees a woman's photograph (it unfolds like a centerfold and he makes noises like "hamana-hamana-hamana"). The Cat admires a young woman dancing in a short top and skirt (she has a bare abdomen and cleavage). The Cat dresses up like a female entertainer and he wears melon halves to cover his buttocks and a bikini top. The Cat begins to describe "where he came from": "When a mommy and a daddy cat..." The Cat says to a garden hoe "you dirty ho," then he acts like he is going to lick it. The Cat bends over and we see bare buttocks (they're prosthetic). A woman wears a short skirt and a tight top that reveal a bare lower thigh and cleavage.

VIOLENCE/GORE 3 - A man yells at a man, a man yells at a woman, a man yells at a boy and a girl and threatens them. A boy and his mother say hurtful things to each other. A fish is thrown into a toilet and he says, "this is where they killed my brother." The Cat pulls out a cleaver, threatens a man, and then cuts his own tail in half (we see him with a bandage later). A man falls from a high ledge into water below. A car spins out of control, it nearly runs into a truck, and then it crashes into a sculpture. The Cat is hit many times by children with bats (they think he's a piñata), and once in the crotch (he screams). A girl gets sucked up into a swirling purple funnel cloud and then falls back down, and a man is squeezed out of a drain pipe and left covered with purple goo. We see a video on TV of a man tackling another man in a Parliament meeting, others join in and we hear punches and yelling. The Cat punches an elephant (we see the trunk and hear whimpering from within a sofa where they fight). A boy stuffs a loaf of bread down his pants to act as padding for a cookie sheet luge he does down a staircase; he ends up going through the open front door and crashes into a parked car (he doesn't appear injured). The Cat, a boy and a girl ride a woman through water like a water flume (they're sitting on her, and she's apparently asleep through the whole thing). A boy and a girl run screaming when they first see the Cat in the Hat. A dog growls at a woman. The Cat threatens a boy with a bat. A man burps loudly, removes his girdle (his bare stomach is showing), picks his belly button, picks his nose and removes his false teeth. The Cat spits up a fur ball (it's huge and we hear squishing sounds), and he burps loudly. A dog urinates on a fire hydrant, a dog urinates in a man's food, and the Cat vomits in a bag a couple of times (we hear "splat"). The Cat has multiple piercings on his face. A man sneezes and purple goo comes out of his nose. A Thing chokes on paper and the other Thing gives him the Heimlich maneuver. The Cat's activities are cartoonish in nature but end up in a lot of property damage: The Cat flings a girl through the air and into a sofa, he flings a boy through the air (we hear a crash), he falls from a ceiling and lands on the floor, and an oven explodes and sprays purple goo all over the kitchen. Thing 1 and Thing 2 destroy a house: they throw dishes breaking them, they throw furniture, they splatter purple goo all around, they ride the babysitter down the stairs (her head goes thump-thump on the steps; she remains fast asleep). A house is covered with purple, bubbling goo, and a house collapses in rubble.

LANGUAGE 2 - The Cat nearly enunciates 4 anatomical terms, 1 clinical scatological term, a device's acronym is spelled as the scatological term S.*.*.T., 2 mild obscenities, 1 religious exclamation (or it could have been "Oh my cod"), name-calling.

SUBSTANCE USE - A man carries a six pack of beer and we see many empty bottles in his house.

MESSAGE - Its fun to have fun, but you have to know when to stop. 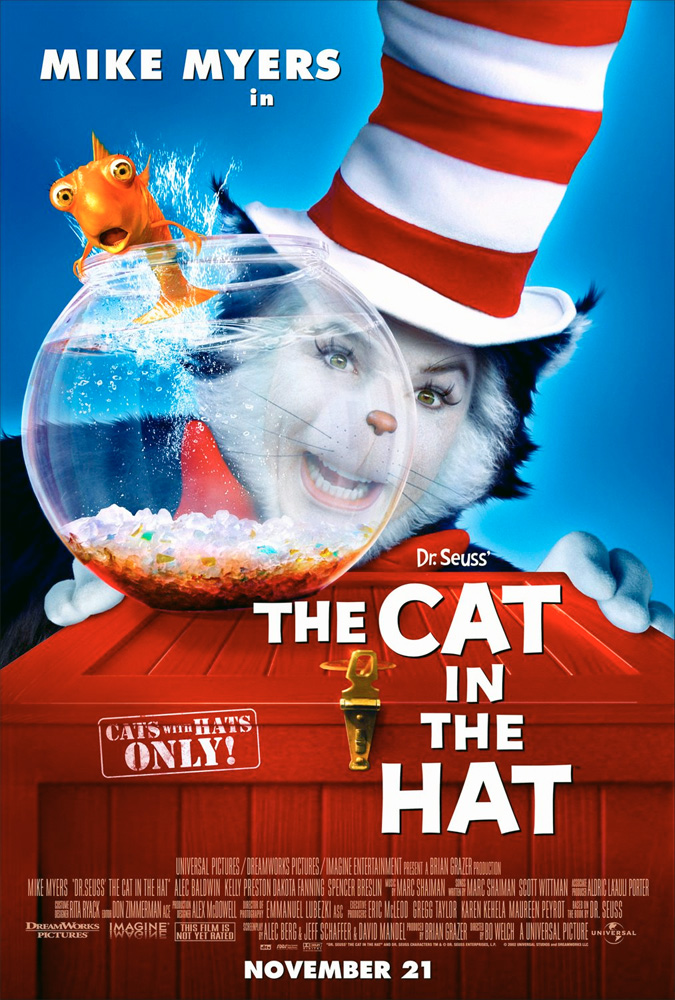