Inspired by a true story about an 11-year-old boy (Nathan Gamble) who was inspired to help a dolphin whose tail had been lost in a crab trap, and how the process of recovery inspired many people. Also with Morgan Freeman, Ashley Judd, Harry Connick, Jr. and Kris Kristofferson. Directed by Charles Martin Smith. [1:53]

SEX/NUDITY 1 - Throughout the movie we see shirtless young men and teen boys wearing tight-fitting swimming shorts. A teenage girl's bare torso is visible when she wears a bikini bathing suit top and short shorts. A boy has a towel wrapped around his shoulders after a shower and a small portion of his bare chest is visible.

VIOLENCE/GORE 3 - A man discovers a dolphin washed up on a beach: we see a rope wrapped around the dolphin and a small amount of blood is visible on its tail. A boy discovers a dolphin washed up on a beach: a rope is wrapped around the dolphin and the boy removes some of it, we see small bloody cuts on the dolphin's tail and muzzle and the water around the dolphin turns red as the tide washes over it.
► A man and two women examine the tail of a dolphin; it appears slightly gangrenous and small healing cuts are visible as the man explains that an infection seems to be spreading. A woman tells a boy that a dolphin is very ill, showing him the dolphin's slightly gangrenous tail.
► On two occasions we see a dolphin pull away from a boy holding it, and the dolphin thrashes against the wall of a pool, breaking a prosthetic tail into pieces as people shout at the dolphin to calm down.
► An older woman tells a man that he will have to "put down" a dolphin. A man tells his young daughter and a boy that a dolphin will be euthanized and the girl cries loudly. An older man tells his adult son that it would be sad to see a dolphin euthanized, since the man had experienced the pain of losing his wife. A man tells his daughter and a boy that a dolphin's tail had to be removed because the infection had progressed too far. A girl tearfully tells a boy that a dolphin's tail had to be amputated. A boy asks a girl if a dolphin will live without a tail. A man explains to several women, a boy and his young daughter that a dolphin may become paralyzed if it continues to use its tail in a particular fashion. A television reporter discusses how a dolphin could become paralyzed if its missing tail was not fixed. A boy warns his mother that an otter could bite off her finger. A boy tells his mother that a dolphin had been run over by a boat but will recover fully. A man tells his daughter and a boy a Native American legend of children falling from a rainbow and turning into dolphins as they fall into the ocean. A woman sarcastically tells her young son that he could have "been stabbed by a swordfish" or drown in a pool. A woman sarcastically tells her young son that he must wear a seatbelt properly so he does not "face plant through the windshield." A man sarcastically jokes with a woman that spending time with his family makes him want to "sharpen his cutlery." Two women appear visibly upset while one of the women tells her young son that his cousin (the other woman's son) had been injured in an explosion while deployed in the military. A man tells a boy that he is sorry to hear that the boy's cousin had been injured. A boy explains to a dolphin that his cousin had been injured in an explosion. A young man becomes upset when he and his young cousin discuss how his injury from a wartime explosion injured his leg, leaving him unable to use it fully. A man shouts at a boy to stay away from an injured dolphin. A boy tearfully shouts at a young man. A woman shouts at her young son.
► We see a young man in a wheelchair and later with a brace on his leg after being hit by an explosion while deployed in the military. We see a woman show a boy and a girl an X-Ray of a turtle with a fishhook stuck in its throat and a man then shows the boy the removed fishhook.
► Wreckage after a large hurricane is seen, and it's intercut with scenes of a boy and his mother cowering in a hallway for protection and a man wrapping a blanket around his daughter's shoulders.
► A pelican chases a woman and she screams and runs away from it. On two occasions a boy is startled when a pelican appears and squawks. A boy shouts at a pelican as it nips at his feet and he stumbles down from the ladder he is standing on; he is unharmed. A girl shouts at a pelican. A man yelps when a pelican attempts to eat his hotdog.
► A man drops a glass on the ground in front of a young man to prove a point and the glass shatters. On two occasions a boy falls into a pool with a dolphin; he is unharmed. A teenage boy pulls a young man into the water of a bay; the young man is unharmed. A girl and a boy pull one another into the water of a bay.
► A boy runs directly into a girl holding a cooler, the cooler falls to the ground and fish and ice pour out of it (no one is injured). A boy and a girl shout in excitement when the girl turns on a blender without the lid causing milk and fish to spray over both of them. A dolphin sprays milk from its snout.
► A girl playfully shoves a boy. A girl accidentally knocks items off a shelving unit and they come crashing down. A girl and a boy steer a toy helicopter through the air, it comes very close to hitting a pelican, it flies away, the helicopter crashes to the ground and the boy steps on it to prevent it from moving.

SUBSTANCE USE - Two full margarita glasses are seen in front of a man and a woman at a party.

MESSAGE - Adversity can be the start of inspiration. 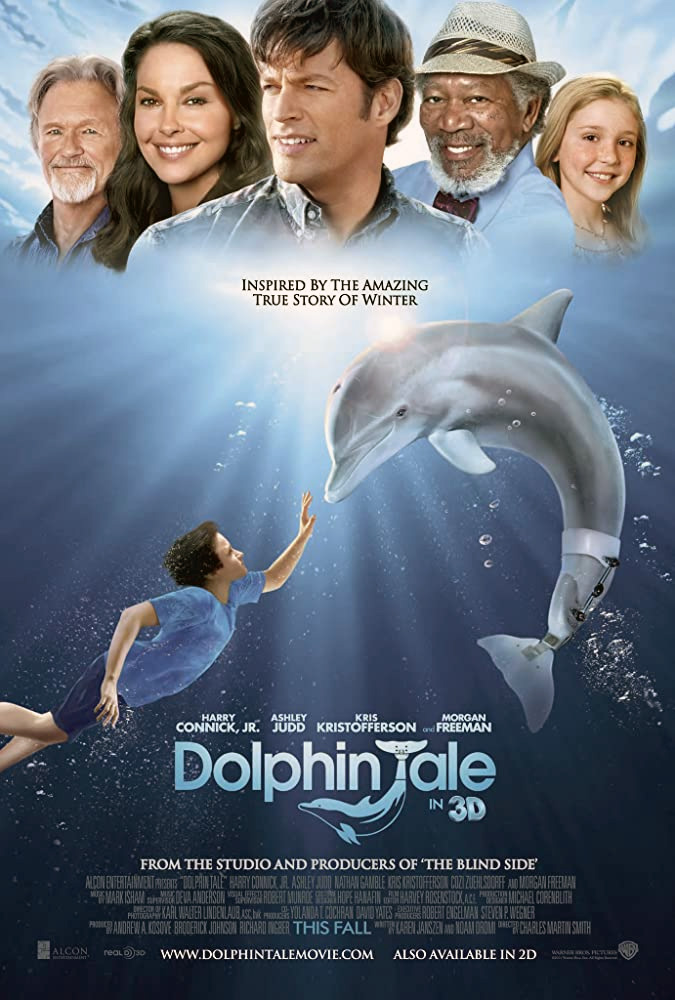