After his father's accidental death, a young man (Shia LaBeouf) becomes depressed and withdrawn and ends up being sentenced to house arrest for attacking one of his teachers. Frustrated with interminable boredom, he starts snooping on his neighbors, that include a single man whose dates seem to end badly. When the young man suspects him of being a murderer the police do not believe him and he takes matters into his own hands. Also with Carrie-Anne Moss, David Morse, Sarah Roemer and Aaron Yoo. Directed by D.J. Caruso. [1:44]

VIOLENCE/GORE 6 - A car slams into a stopped car on a road, it is thrown into the air and flips over, and slides on its roof (we see the two passengers in the car with bloody head and face wounds); another car then slams into the side of the overturned car, killing one of the passengers (we do not see the victim but we see the expression of the other passenger when he realizes what happened).
► A man with a knife holds a woman while slashing at a young man who tries to stop him; the man is then stabbed in the leg and then in the abdomen with garden shears and pushed back into a pit filled with water. A man twists another man's neck, breaking it.
► We see blood splatter and spray onto plastic sheeting that covers a window, and we hear a scream.
► A man slams a woman against a wall knocking her unconscious, and strikes a young man in the face using a bat; the two men struggle, and one man punches the other, binds his hands and feet, and drags him into a house. A young man punches his teacher in the face (we see him with a bruised eye).
► A young man falls through floorboards into water where dead bodies float (we see their gray-tinged and bloated faces) and the young man screams and struggles to get out (he eventually does). We see dead and decayed bodies wrapped in plastic in a passageway, pinned between beams of wood. We see photographs of dead bodies from serial murders.
► A young man sees a recorded image of another young man who looks like he is dead, causing him to panic (the young man is not dead but he is playing a prank on the first young man).
► A young man finds a woman bound, gagged, and hanging by the hands from a rafter. A young man with a baseball bat charges into a man's house looking for his friend, whom he fears has met an unhappy end. A young man is frightened when he thinks a man has discovered him in his house, and he runs screaming and knocking things over.
► A young woman jumps on a man's back and scratches his face with her nails (we see blood), and a young man pushes the man over a banister and onto a flight of stairs.
► We see a dead and dismembered deer wrapped in plastic. A man drags something wrapped in bloodstained plastic down a flight of stairs and into his garage.
► A young man watches a man and a woman in another house: he sees the woman running frantically through the house and screaming, the man grabs the woman from behind, and the young man panics.
► A young man chases several boys who have pulled a prank on him: the young man's at-home incarceration ankle bracelet begins to beep, he panics and runs back home, and police officers arrive at his house and force him to his knees.
► A young man and a young woman jump from a second story window into a swimming pool (they are uninjured). A man pokes a baseball bat through a door nearly hitting a young woman who's sitting on the other side.
► A young man breaks into a garage, complains of an odor, describes it as smelling like rotting flesh and says he sees blood and hair wrapped in plastic. A man talks about how he is going to kill a young man and a woman. A man gets into a young woman's car, confronts her about following him, and speaks to her in a threatening manner (she is frightened). We hear many news reports about a missing woman and the efforts to find out what happened to her.
► A father yells at his daughter and she becomes upset. A woman yells at her son in frustration. A little boy rides a big wheel on a street, and his mother chases him in a panic. While he is watching someone through his window, a young man jumps when a woman touches his shoulder from behind.
► A man speaks threateningly, and as it turns out it is to a rabbit in his garden (he picks it up and carries it away).
► A young man answers his door, stomps on a bag filled with feces and in flames, and smears the goo on the porch floor and his sock. A young man eats a large quantity of peanut butter and chocolate and he acts as if he is going to vomit.

SUBSTANCE USE - Young men and young women drink what looks like alcohol at a party.

MESSAGE - Spying on the neighbors can uncover very strange behavior. 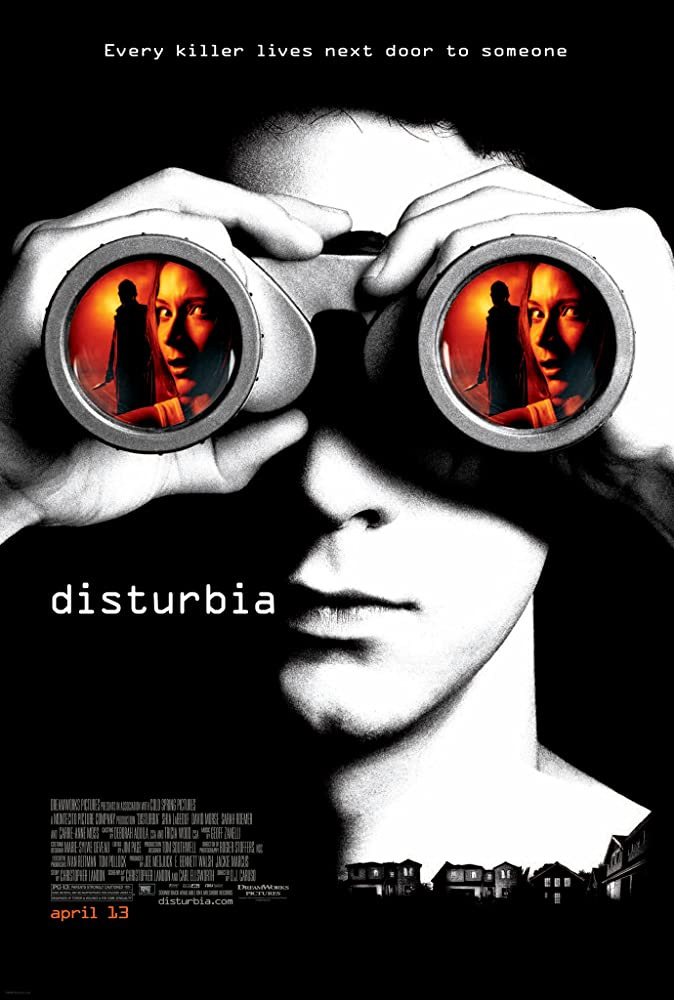