Parody of other films, with five people (Matt Lanter, Vanessa Minnillo, Gary "G-Thang" Johnson, Nicole Parker and Crista Flanagan) screaming and crying their way through a series of never-ending disasters that include earthquakes, tornado funnels, the clash of mentally ill superheroes, rabid rodents, wind storms, and more. Characters die repeatedly and reappear in other disasters, but the protagonists survive. Also with Carmen Electra and Ike Barinholtz. Directed by Jason Friedberg and Aaron Seltzer. [1:30]

SEX/NUDITY 7 - A completely nude young man is shown in a full frontal pose, but the area between knees and abdomen is pixeled out. A young woman shown from the waist up lifts her T-shirt, a large sign of "Hairy Girls Gone Wild" covers her breasts and we see a lot of hair above and below the sign. A young man appears in 5 scenes wearing only underwear that's bulging disproportionately. The wind blows the clothing off a male green giant and he covers his crotch. A woman wears cutoff jeans that reveal the bottom of her buttocks. A young woman appears in most scenes of the film wearing a series of short cocktail dresses that reveal bare legs and cleavage. A young woman wears a halter-top that reveals cleavage.
► A young man in bed speaks to a girlfriend, and a nude man in a Viking helmet, jewelry, and a clock in front of his genitals says, "I'm giving your girl the flavor of love" and leaves; the girl then rises (she's in a bra and brief panties and we see moderate cleavage), a dwarf wearing only briefs and socks hops out of the bed, flashes an obscene gesture and leaves quickly.
► A Hindu guru performs a marriage ceremony and tells the couple to tickle his pickle and he raises his robes to reveal trousers. A young man appears nude and we see a full frontal pose (his genital area is covered), jumps onto the back of another young man and we then see the nude man from the back and side (bare buttocks are visible); while struggling, the nude man asks the other man out on a date several times and receives no answer. A young woman pulls a crystal skull from under her skirt, implying she had it in her vagina.
► A young man kisses another young man on the cheek and rolls his eyes, suggesting sexual pleasure. A priest slaps a young man on the buttocks as he walks past him. A man embraces a young woman and rubs her clothed buttocks while making a suggestive remark.
► Three scenes show two young female wrestlers in one-piece bathing suits, showing significant cleavage, bare thighs and we see parts of their bare buttocks: both women wear knee-high black leather high heeled boots and one has a fishnet stocking, and they wrestle and play Twister. The film's out-take sequence is comprised of sexual language, female wrestling, and women showing significant cleavage in low-cut blouses. Throughout the film, a pregnant teen lifts her shirt to show her bare abdomen. A young woman raises her skirt to dance (we see no flesh).
► An unmarried pregnant teen sings about not wanting an abortion while her boyfriend sings that she should get one. A homeless young woman dressed as Cinderella states several times that she has sex with anyone for a price, all the way down to $5.00, dances with pelvic thrusts aimed at male spectators, refers to a prince as her pimp, kisses a man briefly twice, bats her eyelashes at several men, and removes her wig, becomes a man and states that he is a "tranny." A male singer dances with pelvic thrusts and sings about asking someone on a date, and opens his shirt to reveal a T-shirt that reads "I 'heart' Lance Bass," implying a homosexual relationship. A young man talks on a phone to his mother, asks how her work as a prostitute is going, and he hands the phone to a young woman who discusses mutual prostitution work. A man states that a woman told him that he is all of her top 4 lovers at once and that she's been around the block sexually. A young man tells another young man that the second man's mom gets around sexually. A middle-aged man looks at a woman's breasts and asks, "Are those things real?" A middle-aged man calls many young women at a party "hot" (they are wearing blouses that display a little cleavage, except for one that displays significant cleavage). A young man seeks a girlfriend throughout the film, referring to women with derogatory, sexually suggestive terms. A young woman sings a commercial, mentioning her line of sexy lingerie at Target.
► A series of quick scenes portray all of the film's characters, in groups or individually, singing a song about dating and implying that "dating" means sexual intercourse; a man sings that he is dating Matt Damon and his girlfriend responds that she is dating Hannah Montana, each additional woman sings that she dates a woman and each man sings that he dates a man, two characters sing that they date everyone, a man sings that he dates all of the cheerleaders and basketball players at a high school, and most of the characters dance with suggestive pelvic thrusting.
► A group of cheerleaders and basketball players dance and sway (sometimes suggestively), the girls wear miniskirts and tops that show abdomens but no cleavage and the boys wear knee-length shorts. A man in a Viking helmet, jewelry, and a clock in front of his genitals dances at the end of the film along with a dwarf wearing briefs and socks. Throughout the film, young men dance and grab their crotches.
► A young woman sports a full-length tattoo of a scantily clad woman on her left bicep (the figure shows bare cleavage, abdomen and thighs to the hip).

SUBSTANCE USE - A pregnant teen pours a pint of vodka into a gallon of orange juice and chugs it at a party, saying it is time to get the baby drunk, a young woman takes a gallon of scotch out of her big hairdo and chugs it (she does not seem affected by it), two party scenes show hundreds of bottles of beer, wine, and whiskey on a bar and tables, young men and women are shown holding cups and bottles of beer, half-filled glasses of wine, tall glasses of liquor and a few take sips, a man asleep on a bus stop bench rolls off and a bottle of whiskey rolls away on the sidewalk, bottles of wine are shown on a coffee table in a living room, and two young men fill tote bags with liquor bottles to take away from a party, but drop them when the building begins to shake and the scene ends. Song lyrics contain the phrase "hooked on reefer." A young woman holds a cigar in her mouth briefly in a quick camera pan over her face -- the cigar is unlit.

MESSAGE - Disaster movies are easy to parody, and parody movies are very easy to make. 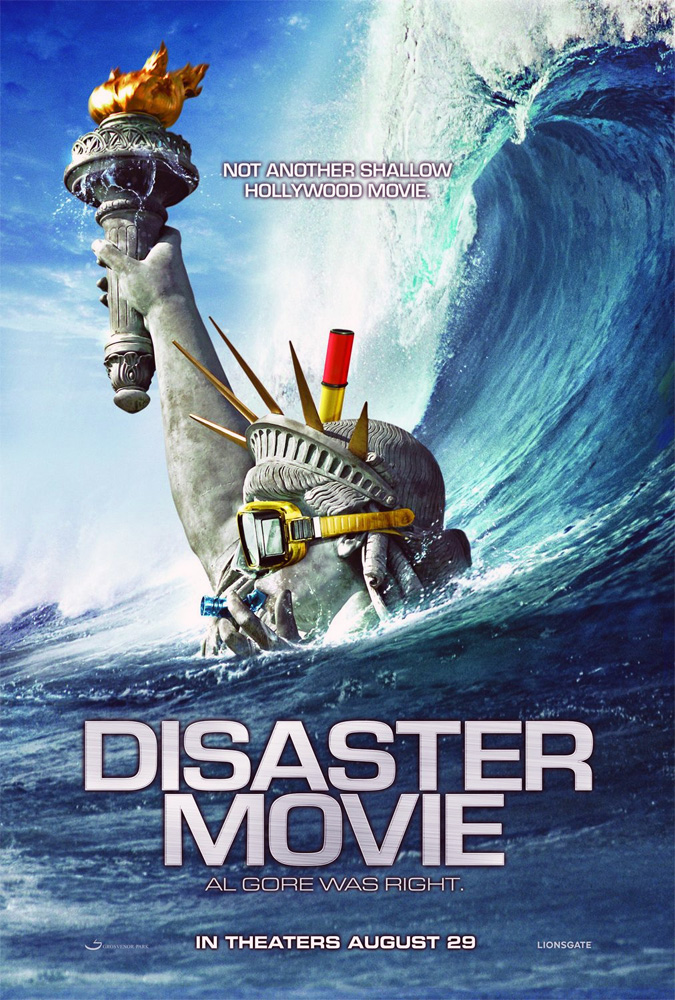