A group of high school seniors re-visit the infamous Dirty Deeds that their predecessors tried to complete with little success: the idea is to carry out 10 increasingly outrageous and wild challenges, which have to be completed from dusk to dawn on a Friday night. With Milo Ventimiglia, Lacey Chabert, Charles Durning, Matthew Carey and Alex Solowitz. Directed by David Kendall. [1:24]

SEX/NUDITY 7 - A young man masturbates using a loaf of bread: we see rhythmic movement, we hear a squishing sound and a look of satisfaction on his face at completion; he then kisses the loaf of bread and then licks it (please see the Violence/Gore category for more details).
► We see a woman in black leather bra and panties and a man on his hands and knees on the floor while the woman whips him on the buttocks.
► A young woman sits on a bed in her bra and panties while a young man is in the bathroom: she says to him, "I'm ready," another young woman comes in the room and caresses her shoulder, and another young man comes in the room, while the first young man comes out of the bathroom nude (below the waist is blocked from view); the other young man looks at him and is startled (the young women have run out of the room because the young man's parents have come home).
► Two girls hug and kiss on the lips (it is implied that one is interested in having sex with the other). A young man and several different young women kiss passionately in his car, in several scenes. Also, young men and young women kiss in many scenes.
► Young women wear low-cut tops that reveal cleavage and bare abdomens and short, shorts and skirts that reveal bare legs. A young woman wears a low-cut top that reveals cleavage. A man is bare-chested and in boxers when he answers the door.
► A young woman opens her shirt (she presumably shows her bare breasts) and gestures toward an older man to come toward her; he stands up but falls to the ground (please see the Violence/Gore category for more details).
► A dead man tips over and his head lands in the lap of a young man; a police officer misunderstands and thinks that there is sexual activity taking place.

VIOLENCE/GORE 4 - A young man is shoved against a car and punched in the stomach, and then another young man is punched. A young man punches another young man hard in the face, he falls back against a wall and we see him wiping blood from his mouth. Several young men fight with each other (it looks like a street brawl), one is thrown onto the ground, and another is head-butted, punched and kneed. A man grabs a young man by the throat, squeezes and yells at him. A young man throws a plastic bottle at a man on the street and hits him in the head knocking him to the ground.
► Two young men go to a funeral home and pull out drawers in the morgue; we see blue tinged feet with toe tags, and we see the two young men carrying one body to a car. Several people carry a dead body out of a school building.
A young man steals a man's prosthetic leg, the man threatens to shoot the young man, he gets up, stumbles and falls to the floor and his gun fires into the ceiling.
► A young man driving a large pick-up truck nearly hits students walking through a parking lot in a few scenes, and in one he drives the truck onto another car crushing it beneath him. A young man drives recklessly through traffic. A truck explodes.
► People talk about someone losing a part of his anatomy while trying to "do the deeds" and they talk of rumors about other bad things happening to people who tried to do certain things. A young man with a crazed look in his eye talks about killing another young man.
► A young man masturbates using a loaf of bread and when he is finished he puts the bread back on the store shelf, another man purchases the bread and we see him eating a sandwich made from it. Several young men urinate in a bottle, and then give it to another young man who drinks from it, spits and gags. A woman flatulates loudly as she walks and a young man makes a comment about the odor.
► People are frightened when it is believed that explosives are planted underneath the stage where they are seated.

MESSAGE - Doing anything just to be considered cool can ruin your life. 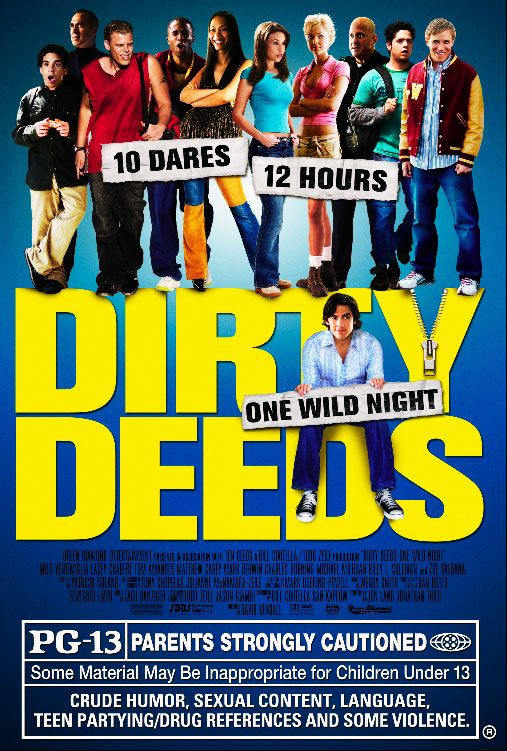