Matthew Broderick stars as a suburban man who calls himself the "Christmas Guy," and is extremely proud of his holiday decorations, until a new neighbor (Danny DeVito) moves in across the street and makes it his mission to create the biggest holiday light display in the world -- so bright that it will be visible from outer space. Also with Kristin Chenoweth, Kristin Davis and Alia Shawkat. Directed by John P. Whitesell. [1:35]

SEX/NUDITY 4 - A husband and wife kiss in bed, they snuggle, and are interrupted by a noise. A husband and wife kiss, and two husbands and wives kiss. A husband caresses his wife's hair tenderly.
► Three teenage girls wearing short skirts and fish-net stockings dance on a stage, and two men in the audience call out to them and make suggestive remarks (one says, "Who's your daddy?" repeatedly), not knowing that the young women are actually their daughters.
► Although it does not appear to have any sexual undertones, a man who had fallen into frigid water is wrapped in a sleeping bag without any clothes (we see his bare shoulders) and another man is in the sleeping bag with him without any clothes (we see his bare shoulders and chest) and rubs his arms and chest to warm him up; the man screams in panic when he regains consciousness and realizes what is happening.
► A woman wears extremely low cut tops that reveal cleavage and part of her bra in many scenes. A 10-year-old boy ogles two teenage girls who wear short skirts (their bare legs and bare abdomens are visible). Teenage girls wear low-cut tops that reveal cleavage in several scenes. A 10-year-old boy watches two teenage girls having a pillow fight (he sees their silhouettes through a curtained bedroom window). We see a painting of a nude woman posing on her stomach (her bare shoulders, back, legs and cleavage are visible) and a 10-year-old boy gawks at the painting.
► A man pulls at something under his shirt (it looks like a pink bra strap), and then he bends over and we see pink thong underwear. A man's bathrobe hangs open (we see his boxer shorts), and a woman laughs, points and says, "It looks like we have a visitor."
► Two teenage girls ask another girl if there are "any hot guys" in their school. An elderly woman tells a younger man, "I look hot" when she tries on a pair of glasses. A man tells a man that he suspects another man is a cross dresser.

VIOLENCE/GORE 3 - A man drops a flare into a box of fireworks, they all begin to explode, and one goes through the chimney and bounces around the house until it sets a Christmas tree on fire.
► Two horses pulling a sleigh with a man in it run out of control, the sleigh side swipes a car, nearly hits an elderly woman and her dog, breaks away from the horses and sails down a hill, jumps over a road, slides along an ice covered pond, and breaks through the ice and sinks (we see the man is OK later).
► A woman is struck hard in the face by a snowball and she falls to the ground hard. A woman trips over a shrub while jogging and crashes to the ground. A man slips and falls in snow. A man on speed skates trips and falls on the ice, another man slips and falls, and one skater is knocked down and two others fall too. Two women hit their husbands on the back of the head in annoyance.
► A man backs out of his driveway while two RVs are parked at the end of the driveway; the car squeezes between them but pieces sticking out of the RVs tear a large gash in the sides of the car and eventually rip both front doors off. Several trees burst into flames when gasoline is spilled around them.
► A wife holds a knife to her husband, and jokingly threatens him.
► A man says, "I got tasered and I wet myself." A man jumps into a pen with a camel, he slides through feces and the camel spits green goo on the man's face.

SUBSTANCE USE - Two women drink wine, and a man drinks a beer.

MESSAGE - Getting caught up in over-planning holidays can make you lose sight of the important things, like family. 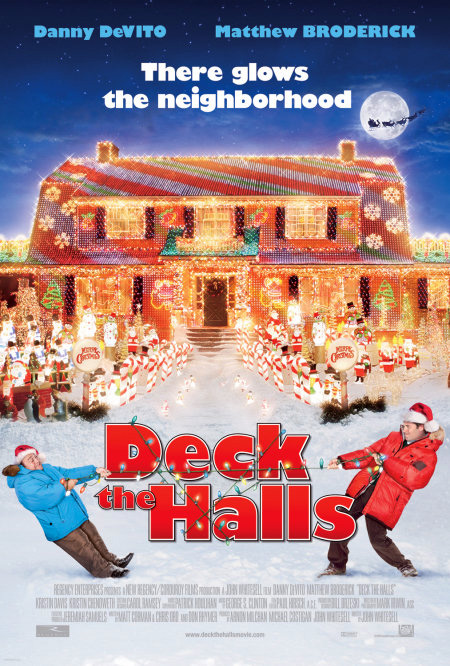