An audit manager (Ewan McGregor) working late hours in a law firm is befriended by a man (Hugh Jackman), who presents himself as a successful attorney, and introduces him to anonymous sex clubs for wealthy and busy professionals. Not everything is what it seems though, and during one liaison, the woman disappears. Also with Natasha Henstridge, Maggie Q and Javier Godino. Directed by Marcel Langenegger. [1:48]

SEX/NUDITY 8 - There are several scenes of a man and different women having sex in different positions (we see kissing, fondling and thrusting) and in varying degrees of nudity (bare breasts, bare buttocks and his bare chest are visible): a topless older woman pushes a man down on a bed and is straddling him; a man and a woman go to a hotel room, she begins to take off her top, they kiss, she takes off his shirt (he is bare-chested and she is wearing a bra), they kiss, thrust and moan (we see her bare breasts and buttocks as she thrusts on top of him); and a man pushes a woman back onto a bed, pulls up her dress, caresses her thighs, climbs on top of her, she moans and it is implied that they have sex.
► A man and a woman kiss, they go to a hotel room, they lie on a bed wearing underwear, they kiss and caress each other, and he leaves to get ice (no sex is implied). A woman leads a man by the hand into a men's room (it is implied that they are going to have sex, but nothing is shown). A man and a woman are shown in a hotel room, she wears a bra and panties and crawls on the floor toward him, rubs her head on his knee, and they kiss and caress each other (the scene ends). A man and a woman kiss, he caresses her clothed breast, he kisses the back of her neck and caresses down her abdomen to her hip.
► A man and a woman talk in a hotel, she wears a bra and he is bare-chested, and she sits on a sofa smoking and he sits on the bed (it is implied that they have had sex). A woman wearing sheer underwear that reveals nipples and bare buttocks talks to a man in a hotel room (no sex is implied).
► A man kisses a woman on the cheek and puts his arm around her shoulder. A fully clothed woman falls asleep in a hotel room and a fully clothed man lies next to her (no sex is implied).
► Women wearing sheer, tight-fitting outfits (their bodies are visible through the fabric, including their nipples) dance in a nightclub while men watch and drink. A woman's bare breasts are visible in a painting on a book cover. A man is shown bare-chested in a locker room, with a towel wrapped around his waist. Two women wear short tennis skirts that reveal bare thighs and tops that reveal bare shoulders and backs. A man in a T-shirt and jockey shorts walks down the hallway of a hotel and runs into a woman at the ice machine. Women wear low-cut dresses and tops that reveal cleavage and bare backs throughout the movie.
► A man talks about being a member of an anonymous sex club. A woman talks about the rules of a sex club and that they include "no rough stuff." Two women on an elevator argue and one says to the other, "You pee in front of men, don't you?" A woman describes sex with a man being "So good that you'd rather die than stop." Two men talk about their sexual encounters and how many women they have had sex with. A man talks about women having urges too. A man tells another man how attractive he thought two women were. A man talks about calling a sex line. A man asks another man who is working late in an office building if he is downloading porn.
► A man looks at a woman wearing a low cut dress (bare back and cleavage are visible) and she looks at him smiling suggestively (nothing happens). A man looks at and smiles at a woman on a subway platform, watches her while in the train and tries to follow her off the train.

VIOLENCE/GORE 7 - A man flips on the light switch in an apartment, there is a huge explosion and fire, heavy items fall from the windows onto the street below and we see the remains of a body later (he has charred skin with gashes and bloody patches).
► A man is shot, blood seeps into the front of his shirt, he collapses and blood pools under his head.
► A man walks into a hotel room, sees blood on the bed sheets, is struck in the head and falls to the floor unconscious (we see blood on his head later). A man punches another man in the face (he falls to the floor).
► We see a dead body wrapped in plastic in a morgue and when the plastic is lifted we see a dead women with a deep cut around her throat.
► A man holds a gun to a man's head and face. A man threatens to kill a woman. A man becomes angry, yells at and pushes a woman against a wall. A woman throws a glass at a man, and it hits the wall behind him and breaks. A man grabs a woman's face and jerks her as if to break her neck (he does not).
► We see photos of a woman with duct tape on her mouth and around her shoulders.
► A man talks about his mother having died when he was 19. A man talks about a man having killed himself (he was joking). We read about a man having been strangled and that the killing was drug related. 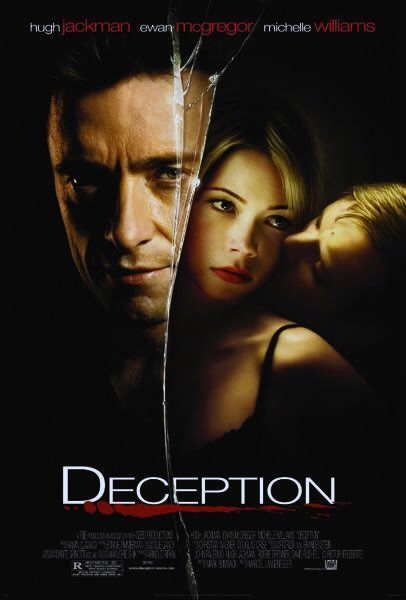