A children's TV show star (Robin Williams) who was fired over a bribery scandal and replaced by a squeaky-clean Barney-esque purple rhinoceros (Edward Norton), will stop at nothing to get revenge -- and his show -- back. Also with Danny DeVito, Jon Stewart, Catherine Keener, Harvey Fierstein, Pam Ferris and Michael Rispoli. [1:43]

SEX/NUDITY 4 - A woman kisses a man passionately and we see her push him down onto a couch, undress him, then undress herself, and climb on top of him -- all behind an opaque, backlit screen. A man and woman kiss a couple of times, and a man leans in to kiss a woman but she walks away. A man is shown bare-chested when he takes off his shirt while changing his clothes; a woman watches him and seems to be interested in him. Women in short dresses that reveal their thighs and cleavage are shown dancing in a club scene. A man is shown in long johns while being fitted for a costume, and he makes a face and twitches when the measuring tape is pulled across his private parts. A man pulls a cookie shaped like a phallus out of a sack during a children's television program (also, during this scene, a man spews a list of synonyms for male genitalia). There is a reference to homosexual love. A man says "he's jacked up higher than a prom dress in June."

VIOLENCE/GORE 6 - There are three scenes which show, in silhouette, a person dressed in a rhinoceros costume being beaten with bars and then shot repeatedly; one scene shows the victim then being dumped into a car and dumped in an alley (we see one photo of the victim with blood on his face and we see him in a coffin at the funeral), and one scene is a re-enactment in a dramatic context. A man in a rhinoceros costume is shot twice and the bullets tear off the ear and the horn of the costume (the man falls to the ground but is unharmed). There are several scenes of suggested violence -- the scenes change before actual violence is perpetrated: we hear after one that a man was decapitated (we see a man with an axe, see the victim tied to a chair and hear him scream), we see a man's very bruised and swollen feet (we see someone approaching him with a hammer), and thugs throw two men to the ground and then threaten them (they ask "have you two ever traveled together before?"). There is an extended scene showing a man on a street surrounded by onlookers as he pours gasoline over his head and lights a match (he does not end up setting himself on fire). A couple of thugs break a door down, grab a man by the throat, throw him around a room and onto furniture, and punch him in the face (we see him bruised and swollen later). A man is dragged out of a building, falls down some metal stairs and hits his head hard on a wall (we see him spit out a tooth and later he has a large bump on his forehead). Two men wrestle in some rafters, and one falls over the side and lands hard on the ground below. A man chases another man with a gun through an alley, and a man is kicked and punched a few times. A man tackles another man to the ground and yells at him, and the man who was tackled hits the aggressor on the head with a large spoon (we see him later with a large bump on his forehead). Two men wrestle over a gun and a woman hits one man on the head with a book. A man bursts through a door with a gun and threatens a man and woman. A man tackles a man on the street and yells at him. A man walks through an angry crowd yelling, and is hit in the head with an egg. A woman threatens a man with a gun, a man threatens a man by pointing a gun to his head, two people threaten a man with a gun, and a man shows another man a gun in his belt. A man threatens another man while in a car and then throws him out onto the sidewalk. A woman punches a man in the face, and a woman hits a man and he falls over a couch and lands on the floor. A man dances right into a brick wall and we hear a loud thud. A man pounds on a TV set with a lamp, breaking both. A man is tied to a chair with a light cord. There are many scenes of people yelling at and verbally abusing each other -- one man is threatened during a telephone conversation. There are references to people who have lost their positions on TV shows because of substance abuse, spousal abuse, etc. A man inadvertently performs at a Nazi rally. During a re-enactment, we see people carrying swastikas and pitchforks chasing a man. A children's TV show character is burned in effigy. A man tears up a magazine in frustration and talks about tearing up a man "piece by piece." A man spills a hot beverage in his lap and winces. A woman throws a frisbee at a man and nearly hits him in the face.

SUBSTANCE USE - There are references to people who have lost their positions in a TV show because of substance abuse and we see a methadone clinic full of addicts. A woman is shown intoxicated and people are shown drinking alcohol and smoking in a few scenes.

MESSAGE - Children's entertainment should not be all about marketing opportunities. You can't change the world but you can surely make a dent. 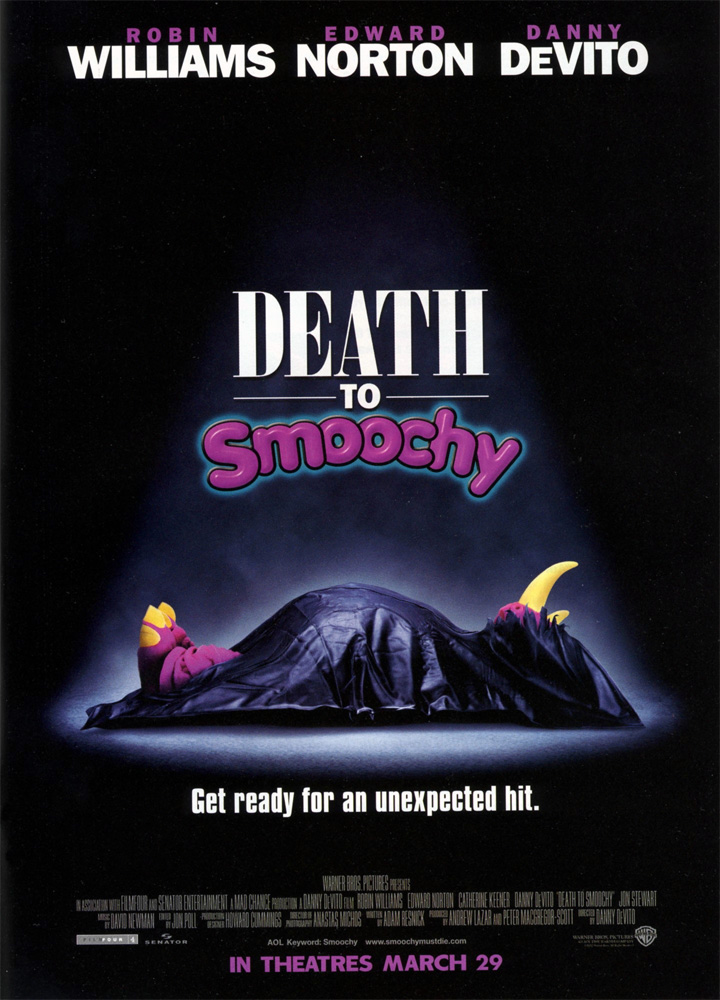