SEX/NUDITY 7 - A man and a woman have sex on an elevator, and the woman bounces up and down while he holds her legs around his waist. After a man and a woman have sex, they see an older woman in the apartment across from them, and it is apparent that she was watching them, and she makes overtures to the man.
► A woman removes her swimsuit and we see the side of her bare breast, her bare hip, abdomen and legs. A woman on videotape removes her bikini top and her bare breasts are covered by a phrase on the TV screen. A woman in a tiny bikini moves seductively and poses (she eats a banana, washes a car, dances, etc.) while a man and a woman watch. A woman tied at the wrists to two poles is stripped to her underwear by a huge ape, and the ape caresses her body with his finger (she giggles and acts aroused). We see part of a woman's body (could be her bare buttocks and pubic region but it is hard to decipher) dangling through a hole in a tarp. A man opens a woman's dress in the back and exposes her very hairy back. A woman pulls off her clothes to reveal a tight-fitting dance costume, and she dances and wiggles her hips in the faces of a man and a woman. A woman wears a very low-cut dress that reveals cleavage. A woman has overly exaggerated hips and buttocks.
► A bare-chested man wearing very short shorts wiggles his hips and buttocks in the face of a man who, it is suggested, had his first sexual experience with him. A man lifts his shirt and reveals eight nipples. A man's shirt hangs open and reveals his bare chest. We see a man dressed like a woman wearing a low-cut top and short skirt.
► A man and a woman kiss, they begin to remove each other's clothing, they moan (we hear this from another room) and then we see them lying in bed together (the man's bare chest and the woman's bare shoulders are visible).
► A woman and a cat kiss passionately. While practicing kissing a woman licks a man all over the face. A man and a woman kiss in a few scenes. A woman kisses a man and his fiancée sees them. A man kisses his son's fiancée on the neck and begins to moan. A woman presses her husband's head into her cleavage.
► A woman dances seductively in a street trying to get the attention of construction workers and firefighters (she stands on a vent, air blows her skirt up and her bare thighs are shown) and by dancing in front of a taxi (the driver looks at her breasts as they bounce); a man dances past her and goes across a street to dance with another man (they thrust their hips and one pretends to be spanking the other on the buttocks).
► A man moans loudly and acts as if he is having an orgasm. Someone who looks like Michael Jackson tries to entice a boy to join him by showing him a stuffed animal.
► An urn on a fireplace mantle falls to the floor, breaks open and reveals the decayed remains of a woman; a cat licks the corpse's tongue, thrusts against its chest and pulls out condoms. A woman and a cat have a romantic dinner and the woman appears to be flirting with the cat. A sign for a restaurant shows a man and a goat licking each other's tongues.
► A woman asks her daughter's fiancé to give her a sperm sample. A man tells his fiancée about a previous sexual relationship he had with another woman. Two women briefly talk about being intimate with their husbands. A man says, "I love Puerto Rican men."
► We see several feminine hygiene products in a medicine cabinet and a man panics when he thinks that the woman he has just had sex with has sexually transmitted diseases. A woman does Krump dancing.

VIOLENCE/GORE 5 - A man and a woman beat up a homeless man on a street, punching and kicking him repeatedly, and they steal his wallet and a bottle of alcohol.
► A man shoots several women who stand in a line and we see them being knocked back or thrown by the blasts. A man shoots himself in the head with a nail gun and falls over onto the ground.
► A woman imagines pulling the breast implants out of another woman with her bare hands (they both scream). A man screws a video game console onto a woman's chest. A man kicks a man in the crotch a few times.
► Someone who looks like Michael Jackson tries to entice a boy to join him by showing him a stuffed animal, and the boy's mother hits the man and slams his head in a dumpster. A man with a bat knocks another man off a motorcycle. A woman accidentally hits a man in the head with a coffee pot, twice. A man threatens to hit another man in the head with a pipe.
► A woman hits another woman in the eye with her elbow. A man pantomimes killing a woman with his bare hands (strangling her, holding a pillow over her face, and punching her). A woman is tied by the hands to two poles, a huge ape fist pounds down on top of her and crushes her (we see only the large fist, there's no gore).
► We see part of a woman's body (could be her bare buttocks and pubic region but it is hard to decipher) dangling through a hole in a tarp and what is supposed to be liposuction is being preformed (a container fills up with what looks like liquid fat). A man with a whirring sander approaches a woman's feet that have long and cracked toenails, he begins sanding, and sparks fly and she screams. A man's face rubs against another man's bare, sweaty and very hairy chest and the man ends up drenched with sweat and he spits out a large hair ball. A woman squeezes (using her fingers and a pair of pliers) a large pimple on her face, it spurts out goo on a mirror and she is thrown back and through a window by the force. In an outtake reel a woman licks a mirror where a pimple has sprayed goo. A woman is sprayed with green goo. An urn on a fireplace mantle falls to the floor, breaks open and reveals the decayed remains of a woman, and a cat licks the corpse's tongue. A cat uses a toilet, we hear many flatulent sounds and trickling, and the cat moans, wipes, flushes and lights a match. A man waxes a woman's back, and she screams when he pulls a strip of hair off the center of her back. People throw food at a man standing in a street. A woman gives her daughter-in-law a "vaginal thermometer" and tells her never to wash it. A man flosses a woman's teeth and brings out a chicken wing. A woman has a large mole on her arm with a hair growing out of it and a man sprays hummus on it. A man talks about milking a cat.
► A woman falls off a roof (she is not injured). A woman is nearly hit by a car. Two women fence with swords (no one is injured). A man throws a child safety seat, with a toddler still strapped in it, out of an RV (he is not injured).
► A woman dances, her breasts bounce and when she spins around her breasts end up on her back and a man who's watching screams. During a kiss a man's leg bends forward at the knee and we hear a crunch. A man bends over and we see a rat sticking out of the top of his pants.
► We see several feminine hygiene products in a medicine cabinet and a man panics when he thinks that the woman he has just had sex with has sexually transmitted diseases. A man scratches his crotch briefly.

SUBSTANCE USE - People drink wine with a meal. A cat smokes and numbers run across the screen indicating that a woman is a heavy smoker (1142 a day) and drinker (the "Tara Reid level").

MESSAGE - Not only horror movies can be parodied. 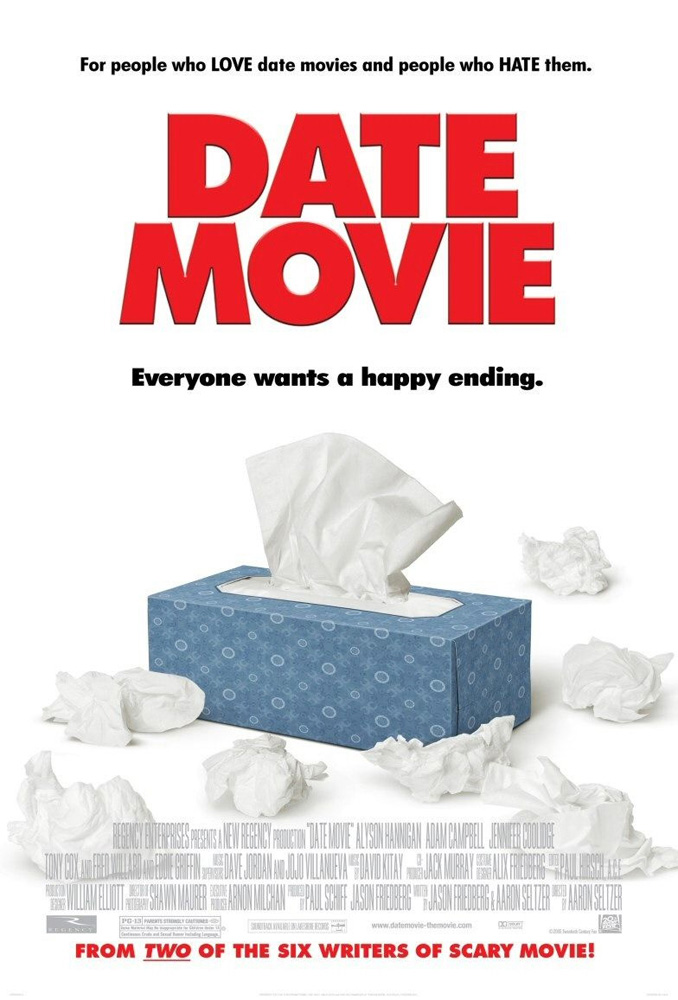