The inquisitive monkey of many children's stories makes his way to the big screen with his human companion, The Man with the Yellow Hat: George stows away on a ship and follows The Man with the Yellow Hat back to New York, where he gets into all kinds of trouble. With the voices of Will Ferrell, Drew Barrymore, David Cross, Eugene Levy and Dick Van Dyke. Directed by Matt O'Callaghan. [1:26]

SEX/NUDITY 1 - A woman soaks in a bathtub and is covered with bubbles, and she stands up at one point and is covered with paint and bubbles. A woman wears a short skirt.
► A woman is romantically attracted to a man. A woman's name is Miss Plushbottom.
► A man hugs another man in a monkey suit.

VIOLENCE/GORE 3 - A man shoots a tranquilizer gun and the dart hits another man in the leg, and he drops to the ground asleep.
► A man looks directly into the sun, his eyes turn bloodshot and we hear sizzling; he yells, splashes water on his face and rubs his eyes (he's OK). A man holds a machete and spins it around on a desk top, and falls off the desk and into a chair after having accidentally thrown the machete across the room (it is attached to a book shelf).
► A man races his car toward a pier, jumps off the edge, crashes into the swimming pool on a large ship, jumps off the ship and into the water to catch the anchor of another ship, and rides the anchor up to get into the hold.
► A man, who's painting, slips, falls off his scaffold and dangles by a rope wrapped around his waist. A man falls into water. A man chases a man and a monkey and the man falls off the ledge of a building (he's OK).
► A monkey fires up a rocket in an exhibit, a man jumps into the rocket with it, and they take off and circle the Earth. A monkey holding several balloons floats away and a man grabs more balloons and follows: the man dangles over a lion cage, the lion lunges at the man growling, the man runs into a wall, the monkey's balloons break and he falls, but the man catches it.
► Animal control captures a monkey in a net, puts it in a cage, and then in the hold of a ship. A monkey climbs along the outside of a building and swings on traffic lights. A woman screams when she sees a monkey clinging to the window of her taxi.
► A man is hit in the knee and head by dresser drawers that slide open during a sea voyage. A man hits his head on a wall. A man pounds on an apartment door. A huge skeleton of a dinosaur collapses to the floor.
► A monkey pours buckets of paint into a woman's bathtub while she is soaking in it. A monkey unlatches suitcases and the contents burst out (clothing, etc.). A monkey unrolls many rolls of toilet paper.
► A hippo pushes a monkey out of a pond and lands on the bank. A monkey puts an alligator egg in a bird's nest and the mother bird squawks at the monkey angrily. A mother elephant snorts at a monkey and pulls her baby away from it. Several men tease another man because of his clothing.
► A boy picks his nose, a monkey eats bubbles, and a monkey tries to eat a man's hat.

MESSAGE - Learn by experience and let curiosity guide you. Everyone needs a friend. 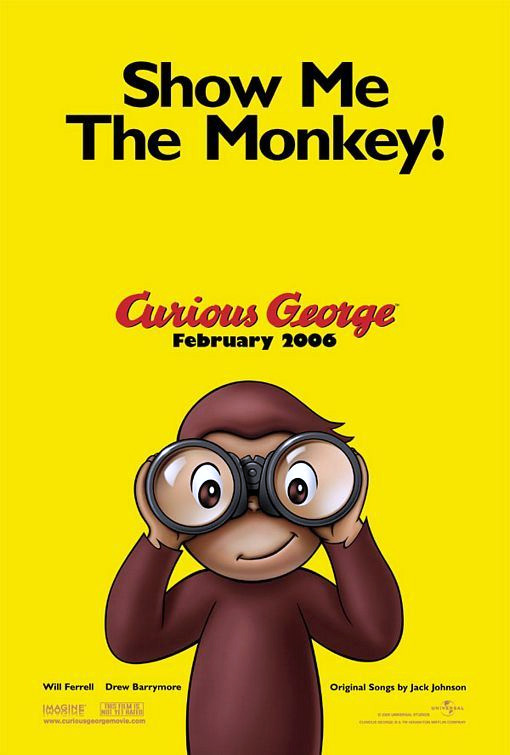