SEX/NUDITY 6 - We hear rhythmic moaning, and we see a man thrusting while lying on top of a woman (they are both nude and we see her bare breasts and legs, and his bare back and buttocks).
► A woman wears a low-cut evening gown that reveals cleavage and the sides of her breasts. We see a painting of a nude woman with bare breasts and pubic hair.
► Two police officers pull a car over after seeing the woman's head in the man's lap and it is implied that she was performing oral sex; one officer searches the woman and gropes her legs and crotch while doing so. A police officer accuses a woman of lewd behavior, stating that he witnessed her performing fellatio on her husband while he was driving.
► A man tells his mother over the phone that he has to go because he is "having sex with a white woman."

VIOLENCE/GORE 8 - A man gives a hitchhiker a ride, their conversation becomes heated, one man reaches for something in his pocket, and the other man shoots him -- we see the victim with blood in his mouth and he slumps over dead; the other man pushes the body out of the car and we see him later with a blood-soaked shirt.
► A truck runs into a man standing along the side of a street, the truck stops, the passenger looks under the truck, and we see a man stuck under the truck -- he has been dragged along the street and has a very bloody head and face; he is pulled out (we hear him scream), and then we see him dropped onto a sidewalk in front of a hospital.
► A dead man lies in a parking lot; we hear that the man was a police officer (we see the body with a bloody bullet hole in his forehead).
► Two police officers come upon the scene of a multi-car accident: one car is overturned and dripping gas, another car is smoking, and a woman is trapped in the overturned car. One police officer tries to free her, she hits him and yells at him, the other car begins to burn and flames race toward the overturned car, and the police officer goes back and pulls her to safety while the car explodes.
► A man walks toward his home, another man confronts him on the street, points a gun at him, while the man's young daughter runs from the house and jumps in her father's arms; the man pulls the trigger and the father screams as his daughter slumps in his arms (she's not killed).
► Two men hold guns on a man and try to take his car, and the driver beats one of the carjackers while the other runs away; the driver and one of the carjackers speed away in the same car and when chased by the police, one of the men gets out of the car and is held at gunpoint by the police officers, acting in a confrontational manner -- one of the officers pleads with the other officers to lower their weapons and eventually they all drive away unharmed.
► Two men hold guns on a man and a woman, one forces the woman to the ground, and they then steal their car.
► A police officer talks to another police officer in a threatening manner and squeezes his hand hard. Two police officers stop a car, they tell the two people in the car to get out, the two people are pushed against the car and searched, and one officer searches the woman and gropes her legs and crotch while doing so.
► A woman slips and falls down a flight of stairs spraining her ankle. We see a man in a hospital with a badly bruised face.
► A man tries to buy a gun after his store was robbed, he begins to argue with the salesperson and accuses him of cheating him; the salesperson yells and tells him to leave, and a security guard ushers the man out of the store.
► A woman collapses and screams when she must identify her son's body in a morgue. A man asks another man what he has at a crime scene, the man says, "a dead kid," and we see a sneaker on the ground. We see the back of a van filled with women and children and we are told that they are part of a slave trade. A man walks into his store, finds the door broken, shelves overturned, inventory destroyed and racial epithets painted on the walls.
► A man sets his car on fire, young people gather around it throwing things into the flames (chairs, trash, etc.) and a man joins them. A car crashes into the back of another car, and the drivers get out of their cars yelling racial insults.
► A man talks about people "lynching black men," a man talks about an actor not "talking black enough," and a man talks about a race of people always being "coked out of their heads" and "stoned." A woman yells at her husband repeatedly, another woman yells at her husband, a man yells over the telephone, a man acts in a threatening manner, and other people yell at each other and are insulting. Two women argue bitterly at the scene of a car accident. A little girl tells her father that she is sleeping under her bed because she is afraid of the gunshots she hears from outside.
► We see an elderly man sitting on a toilet moaning in several scenes and we hear that he has a urinary tract infection and is unable to urinate.

SUBSTANCE USE - We see drug paraphernalia on a table (a syringe, a spoon, a lighter) and a woman appears to be in a stupor. A man is forced to do a sobriety test by a police officer. Two men smoke cigarettes at a crime scene after saying that they have quit. A man smokes a cigarette after having sex with a woman, a woman smokes, and a man smokes in several other scenes.

MESSAGE - Truth does not always enter into the picture when race is involved. Actions determine who you really are. 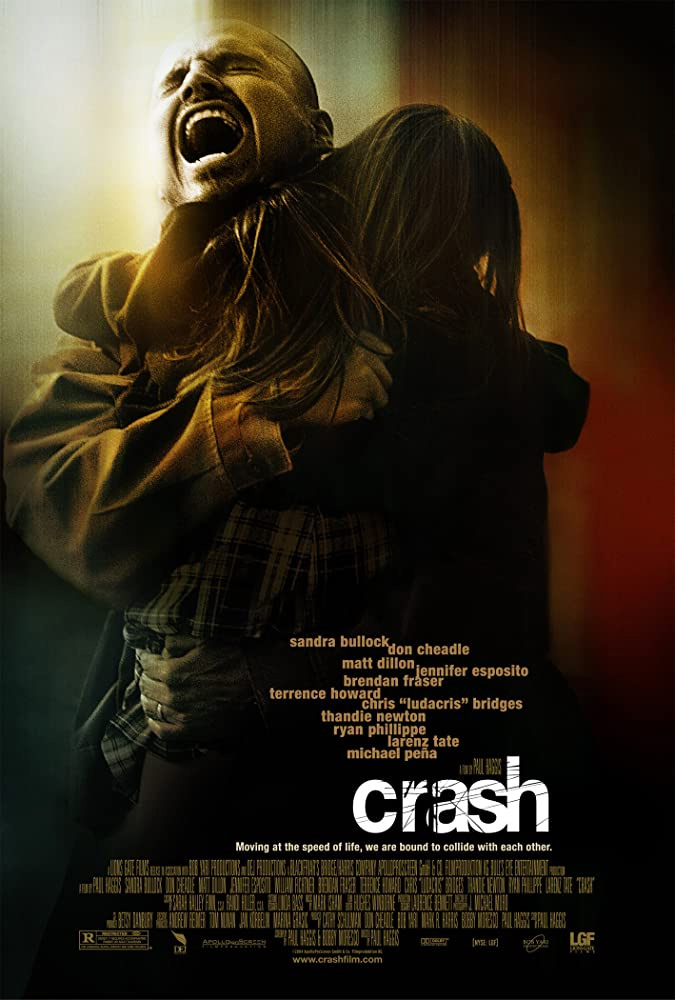