Adam Sandler stars as a workaholic architect, who is stretched to the limit, trying to balance his professional and personal responsibilities. When he is given a TiVo-like remote that he can use to control time by speeding it up or pausing it, it seems like just the right solution to his situation -- until he realizes just how much of his life he is really missing. Also with Christopher Walken, Kate Beckinsale, David Hasselhoff and Sean Astin. Directed by Frank Coraci. [1:38]

SEX/NUDITY 6 - A husband and wife kiss in bed, he massages her briefly, we see the silhouette of the man thrusting and then see them lying in bed together (he is bare-chested and she has bare shoulders).
► We see the silhouette of a man having sex with his wife (there's rhythmic thrusting), and a dog climbs on the man and begins to thrust (the man throws the dog off him). Several dogs thrust on a large stuffed duck in several scenes.
► A man watches his parents have sex (we hear moaning and slapping and see sheets moving rhythmically).
► A woman jumps into her husband's arms, wraps her legs around his waist and they kiss. A husband and wife hug and kiss in several scenes. A man and a woman kiss in several scenes.
► A woman wearing a low-cut tank top jogs in slow motion and a man watches her breasts as they bounce (we hear sloshing as they move). Two women wearing short skirts (revealing bare legs and feet) sit on a man's desk and he talks about who has the sexiest feet. A man admires another man's wife and makes suggestive remarks about her body. A man talks to his co-workers about sexual harassment in the workplace and slides are shown of a man with his pants around his ankles and sitting on a photocopier.
► A man makes a comment about his son's endowment being the size of a breath mint at birth, and the son makes a comment about making his father's breath minty fresh. A husband tells his wife that he wants to "fully satisfy" her. A husband and wife lie in bed, the husband asks the wife, "what do you think?," she asks for a massage and he says, "let's go to sleep."
► A man makes remarks about a woman being unfaithful to her husbands (she had been married three times). A man yells at his daughter in several scenes, when she wears revealing clothing. Several people in a delivery room mistake a baby boy for a baby girl and make remarks about the size of his endowment. A man talks about wanting to whistle at pretty girls. A man tells another man, "I don't play for that team" implying that he is not gay. We hear a news report that a cloned man is "suing himself for molesting himself." A man makes a comment about wanting to see wet T-shirt contests in a restaurant.
► Several women in an office wear very low-cut tops and short skirts that reveal cleavage, bare abdomens and bare legs, a woman wears a tank top and short, shorts that reveal cleavage, bare abdomen and thighs, a teenage girl wears a short skirt, fishnet tights and a low-cut top that reveal cleavage and bare abdomen, and a woman's top is off-the-shoulder revealing her bare shoulder. A man pulls down another man's pants revealing red bikini underwear, and a man wears a bikini swimsuit. An overweight man touches his breasts and squeezes them. A man wearing boxer shorts gets out of bed (he is bare-chested), and a man wearing boxer shorts and a shirt gets off a sofa where he has been sleeping.
► A man brings a dog home and offers it to another dog (presumably as a mate) but both dogs turn out to be male. A man looks through an opening that we are told is what he saw at the time of his birth.

VIOLENCE/GORE 4 - A man slaps a man in the face several times and then flatulates in his face. A man kicks another man in the groin repeatedly.
► A man tries to inject a man with a sedative but the man forces the needle into the first man's arm, whereupon he collapses, unconscious.
► A man squeezes another man's throat after seeing him kiss his wife, assuming she is being unfaithful because he doesn't remember that they are no longer married.
► A dog jumps on a man shoving him backward into a stone wall and knocking him unconscious. A boy is struck hard in the head with a baseball (he falls to the ground and screams).
► A man lunges at a man and falls hard on the ground. A man has a heart attack and we see him in a hospital bed. A man drives his car over a robotic dog crushing it. A man raises his fist to a man in a store, startling him.
► A woman grabs her son by the hair and pulls him into the house while yelling at him. A man yells at his wife, children and parents in frustration in several scenes. . A man yells at and chases teenagers who have been setting off firecrackers near a picnic area. A woman yells at her husband and says that she hates him. A woman yells at a man in a couple of scenes. A man wakes up and yells at his children (in a joking manner) startling them.
► A man yells at his dog, and the dog has a bowel movement (we see droppings and hear flatulence). A man yells and is disgusted when he tastes something foul after, unbeknownst to him, another man flatulated in his face. A man has an extra flap of skin around his waist after several liposuction treatments.
► We hear that a man killed himself. We hear that a man was treated for cancer and had a heart attack. Two children talk about a television program and a scene where a woman's severed arm is found. A little girl worries that her father is going to die. A man makes an allusion to an unwelcome place where a remote control may "pop up."

SUBSTANCE USE - People drink alcohol in a couple of bar scenes. A man smokes a cigar in a few scenes. A man drinks cold medicine in several scenes. A woman tells her adult son to "stay off the bong pipe." We hear that a woman is in rehab. A little girl asks her father if he smoked crack. 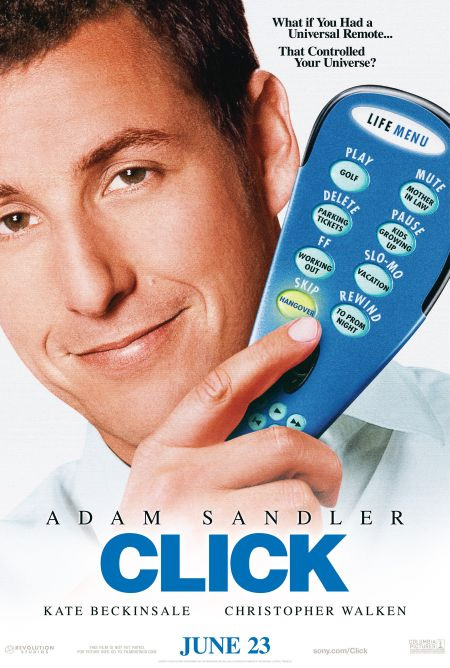