After a young woman's father dies, her cruel stepmother (Cate Blanchett) and stepsisters (Holliday Grainer and Sophie McShera) mercilessly bully her (Lily James). Forced to become their unpaid servant, she maintains a positive outlook and when an invitation to a palace ball provides the chance of reuniting with a man (Robert Madden) she met in the woods, her stepmother interferes, but an elderly passerby makes magic happen. Also with Derek Jacobi, Stellan Skarsgård, Hayley Atwell and Helena Bonham Carter. Directed by Kenneth Branagh. [1:45]

SEX/NUDITY 2 - A man and a woman dance close together and later kiss for several seconds. A man and a woman kiss for several seconds on a balcony. A man and a woman nearly kiss, but do not.
► Women searching for husbands wear curly hairdos, bright lipstick and gaudy eye makeup with low cut floor-length dresses that reveal moderate cleavage; two of the women dress for a party and look at each other while wearing tight corsets that reveal slight cleavage and wide pantaloons that extend below the knees. Women at a palace ball wear long gowns that reveal cleavage in round necklines. A woman's dress reveals cleavage at a scoop neckline. Men in a kingdom wear tight stretchy trousers and the outline of codpieces shows in the groin area of most of them.
► Several statues of semi-nudes stand in homes and a palace; some are female and they reveal full chests, breasts (no nipples), shoulders and arms and others are male, revealing arms, shoulders, chests, abdomens and navels.

VIOLENCE/GORE 2 - A woman collapses to below the frame in a hallway at home and the camera cuts to the pale woman lying on a chaise, covered by a blanket; she cries as she tells her young daughter that she must soon go (death implied), the girl cries and we see a brief scene of the girl and her father dressed in black and walking away from the camera in a meadow. A doctor listens to a man's chest with a device and the man asks about the result; the doctor hesitates and the man turns to his son and says that he will be going soon (death implied) and in a later scene the man is in bed under covers, speaking with his son and they both cry and embrace. A messenger brings news of the death of a man and his adult daughter cries as her stepmother wails, "How will we live now?" and stomps away.
► A woman shouts at and pushes her stepdaughter often, pulling on her arms, pushing her by the back and sneering at her; she forces the stepdaughter to live in a dirty attic and forbids her to eat meals with the family and then fires all the house staff and forces the stepdaughter to do the work of all of them, from sunrise to 3:00 AM every day; with no heat in the attic, the younger woman sleeps on the hard kitchen floor by the dying fire and the stepmother tells the younger woman she is dirty and wretched. A woman alters and wears her mother's party gown; her stepmother tears the sleeves off her and rips apart the neckline, telling her that she is not good enough to go to a party. A woman criticizes her stepdaughter for being beautiful and kind and locks her in the attic. At a party a woman calls her adult daughters stupid and hits each one on the top of the head with her closed fan. A woman walks home with some animals in the rain, and she is seen wearing a dress torn by her stepmother.
► A woman on horseback meets a snorting, pawing stag that runs away; hunters charge past with rifles and one hunter stops to speak with the woman, who asks him not to kill the stag (he agrees). Men practice fencing with sabers in an exercise room and do not wear masks; one man puts a sword to another man's throat, but no injury occurs. At a party, a man runs head first into a low archway, knocking himself down.
► Two adult sisters fight and scream at home over possessions and dating a prince; one shouts, "I'll scratch your eyes out!" and the other later shouts, "I'll dash your brains out on the palace steps"; they argue and stomp about when they break a tiara. A woman complains that both her first and second husbands died, leaving her alone and poor. An aide to a king makes loud announcements in a village, snorting derisively at the "commoners." A grand duke argues with a king and the prince about choosing a bride for the prince.
► After an argument, a prince sends his grand duke out to find the owner of a glass shoe; dozens of women grunt, groan and struggle while trying to fit their feet into the shoe and four men pass out from foot odor and fall below the frame when a cook removes her shoe; two women grimace exaggeratedly into the camera as they try to stuff their feet into the shoe, and one woman rolls on the floor on her back, grunting, because of the pressure she applies to her foot and the shoe; an old woman wants to try the shoe and a man snorts, sneers and walks away from her and another woman is locked in an attic as a captive, but the prince's men hear her singing and release her.
► A woman throws a cat onto the ground from a coach and it hisses and spits, landing on its feet. While chasing mice in a house, a cat runs headlong into a footstool, knocking itself out and onto its side. A young woman drops a plate in her deceased father's old office, it breaks and she cries.
► A fairy godmother changes a pumpkin into a huge coach and as the pumpkin enlarges in a gazebo greenhouse, it pushes the magic woman and a younger woman out the glass doors; in a loud explosion with swirling colors and sparkles, the coach appears as two lizards grow into greenish-skinned footmen with sharp teeth and one footman catches a fly with his long tongue while four mice become big-eared horses and a goose becomes an old driver. At midnight a magical coach becomes a pumpkin once more, breaks apart and rolls toward the camera as its wheels fall off on the road and the liverymen and horses become animals once more, sliding toward the camera.
► An old, dirty woman with brown teeth asks another woman for a cup of milk; she then gulps and spills it down her chin, before burping loudly.

SUBSTANCE USE - A half-full medicine bottle of yellow liquid is seen on a side table near an ill woman, and a fairy godmother uses a magic wand that emits blue and white substances in swirling beams. A woman gulps a small glass of wine all at once at a poker table during a party in her home.

MESSAGE - Greed and envy in others cannot extinguish one's own courage and kindness. 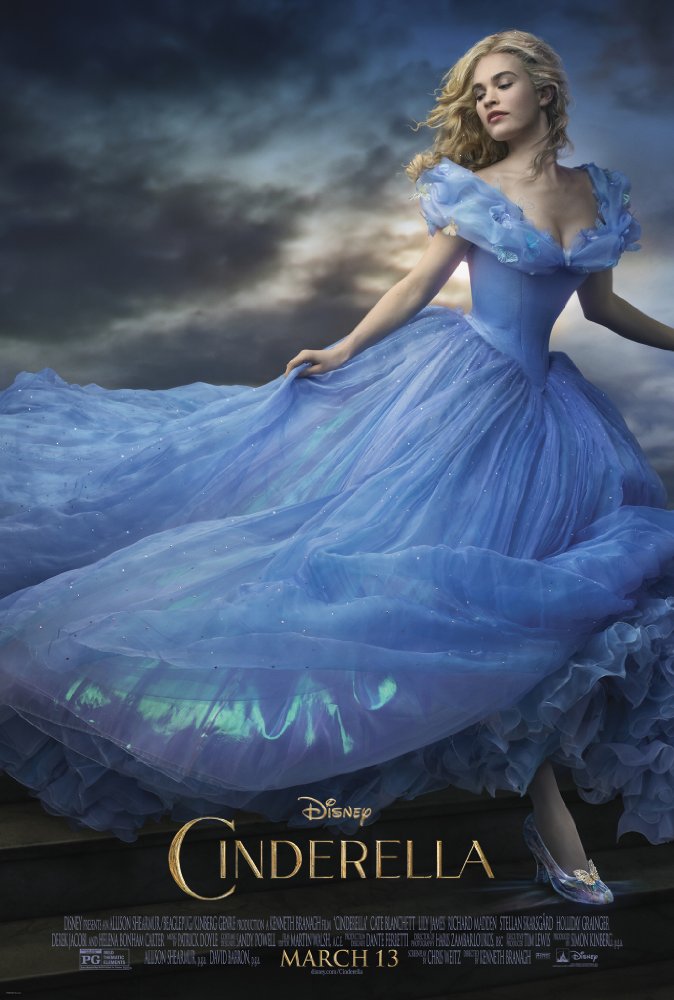