Tim Allen and Jamie Lee Curtis star as the Kranks, a happily married couple that has always enjoyed celebrating Christmas. This year is going to be different though, since their only daughter (Julie Gonzalo) is away in Peru working for the Peace Corps. Unable to deal with the idea of being without her for Christmas, the Kranks decide to skip the season altogether and go on a Caribbean cruise instead -- to the horror of their friends and neighbors. Also with Dan Aykroyd, Cheech Marin, M. Emmet Walsh, Rene Lavan and Jake Busey. Directed by Joe Roth. [1:34]

SEX/NUDITY 3 - A man and a woman hug and kiss romantically several times, and a young man and a young woman kiss several times. A woman (in pajamas) climbs onto her husband's lap while in bed, and we hear him say, "It's not even Saturday." A woman gets the impression that her husband is suggesting that they have sex on their dining room table; she guzzles her wine (and her husband's) and unbuttons her sweater vest, giggles and says "It's not even Saturday." A man talking to his grown daughter makes a comment about, "the guy you shacked up with." A priest ogles a woman in a bikini. A woman wears a bikini in a tanning bed, exposing cleavage, bare abdomen and bare legs and a man wears bikini swim trunks that reveal his bare chest, abdomen and legs.

VIOLENCE/GORE 3 - A police officer chases a burglar up a fire escape, he slips on stairs and hits his head on a metal railing, he continues to give chase, and the burglar is tackled to the ground and pushed against a police car (we see his face pushed against the window from the inside). A burglar jumps off a roof onto a car and falls onto the ground, and he is then hit in the head by a man with an umbrella. A man putting a large snowman statue on his roof slips, rolls down the roof and over the edge and dangles by a rope tied around his ankle; when he is cut loose he falls hard to the ground. Several people slip and fall hard on an ice-covered sidewalk, and a woman slides along the length of the sidewalk and sees an ice-covered cat standing nearby. A man left outside on a roof for a long time is covered with frost and he pops an icicle out of his nose. A man chases a boy, he jumps toward him knocking him into a fake deer, he holds him on the ground and the boy struggles. A man plugs in Christmas lights, there is a large spark, he is thrown back onto the ground and the power goes out. A man attempting to hang outdoor Christmas lights is shocked and falls off a ladder onto the shrubs below. A man runs alongside a moving car and the driver closes the window on his fingers, and the man falls on the street leaving his gloves in the window of the car. We hear that a woman's cancer has returned for the third time and it is implied that she is dying. A man pounds his head against a door jam in frustration. Two women charge for one last canned ham in a grocery store and one slams into a cookie display causing it to collapse and she falls on the floor. A woman drops a canned ham; it rolls under a car and into a busy street where it is obliterated by a large truck. A man and a woman are frightened by a snowman statue that appears to have an angry expression. A woman is startled by two people peering in her window and she screams. A man steps on a cat's tail in several scenes (we hear the cat screech). A mob of people chant loudly outside a house and the woman inside is upset and hides under her bed covers. Two men exchange unkind words in several scenes. People act angrily and make disparaging remarks about a man and a woman. A man standing in a street is splashed with water by a passing car, and a man standing under an awning is drenched with water when it collapses. A man drives his car into a puny tree on a Christmas tree lot. A man who has had Botox injections in his face looks swollen and distorted and he pokes himself in the cheeks with a fork a few times.

MESSAGE - The true spirit of Christmas is in us all and it's more than bright lights and presents. 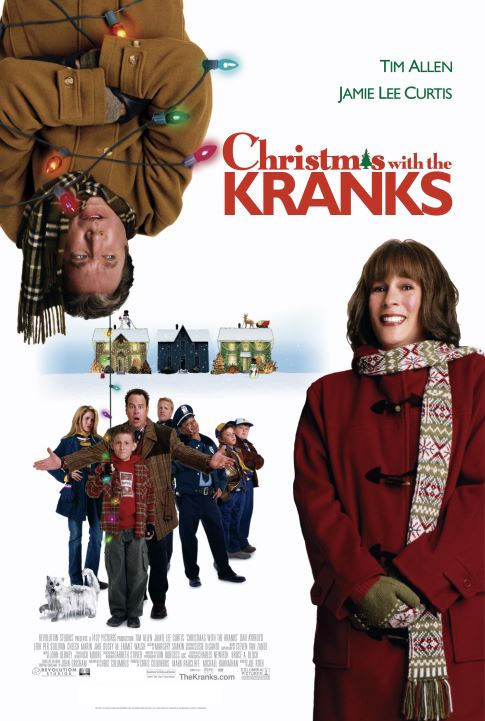